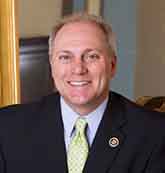 “Jill and I are praying for Congressman Scalise, my colleagues, their staff, and the heroic Capitol Police officers affected by today’s tragic shooting.

“I want to extend my deepest thanks to the brave first responders on the scene, and I join the entire Congress and country in wishing a speedy recovery for all those injured in this horrific event.”

Scalise was shot today at a Republican Party baseball practice in Virginia. Scalise is the House Majority Whip and represents the First Congressional District of Louisiana.

U.S. Capitol Police took the rifle-wielding gunman down at the scene, according to reports. He has been identified as James Hodgkinson, 66.

Five people were transported including Scalise, a congressional aide, two law enforcement officers and the shooter. A spokesperson for Scalise said he was “stable” and undergoing surgery after being shot in the hip.

President Trump just reported that the shooter has died.