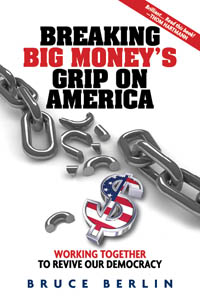 U.S. Sen. Tom Udall will lead a roundtable discussion titled, “Returning Democracy to We the People: A Discussion About Money in Politics,” at 5:30 p.m. Thursday, Oct. 13 at Santa Fe’s Collected Works Bookstore & Coffeehouse at 202 Gallisteo St.

This event is free and open to the public.

So far, super PACs have spent more than $1 billion in dark money to influence this election, and groups have reserved or purchased more than $500 million in television ads to air in just the final month. Such spending was unleashed by the Supreme Court’s Citizens United and subsequent decisions. Udall, Harrison and Berlin will discuss how big money donors have been able to grow in influence in our elections, why that matters in this election — and in future ones — and how we can take action to return our elections to “we the people.”

Sen. Tom Udall: Udall is recognized as a national leader for campaign finance reform. His constitutional amendment to overturn Citizens United and other flawed decisions received support from over half the Senate in 2014, and the New York Times recently endorsed his legislation to replace the constantly gridlocked FEC with a board capable of actually enforcing our election laws.

Viki Harrison: As the executive director of Common Cause New Mexico, Harrison leads the organization’s efforts to promote democratic values and equal rights and serve as a watchdog against corruption and abuse of power. Common Cause is one of the grassroots organizations leading the national effort to reform our campaign finance system and overturn Citizens United.

Bruce Berlin: In his book, Berlin discusses why some people see the United States as a plutocracy run by and for the very rich and why a nonpartisan Democracy Movement is necessary to overcome “the ruling status of Big Money and convert our government into one that instead serves the true needs and desires of the American people.”

Meredith Machen: The League of Women Voters is a grassroots organization that has helped lead efforts to inform and educate voters since its founding. The LWVNM “believes that methods of financing political campaigns and public offices should ensure the public’s right to know, combat corruption and undue influence, maximize fiscal accountability and transparency, and allow maximum citizen participation in the political process.”