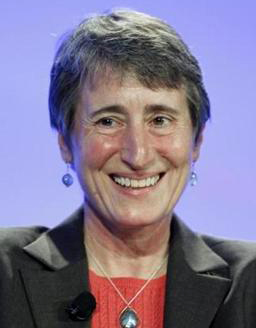 “Sally Jewell is a unique and exciting pick to head up the Department of the Interior. If confirmed, she would bring to the position an array of skills from her business background in energy development and as the CEO of a wildly successful outdoor outfitter.

“I look forward to meeting with her as she works through the nomination process and learning more about her personal commitment to conservation, environmental stewardship and responsible energy production. I am also interested in her perspectives on issues that are important to New Mexico, like Interior’s roles in water management, wildfire protection and tribal sovereignty.” Sally Jewell

Obama nominated Jewell, the chief executive of Recreational Equipment Inc., (REI) based in Kent, Wash., to lead the Interior Department, with a vow that she will balance the agency’s at times conflicting mandates to promote resource development and preserve the nation’s natural heritage.

She is in line to replace Ken Salazar who has led the department since the beginning of the Obama administration.

Jewell, 56, spent 19 years as a commercial banker before taking the reins of REI in 2005 and growing it to nearly $2 billion a year in sales.