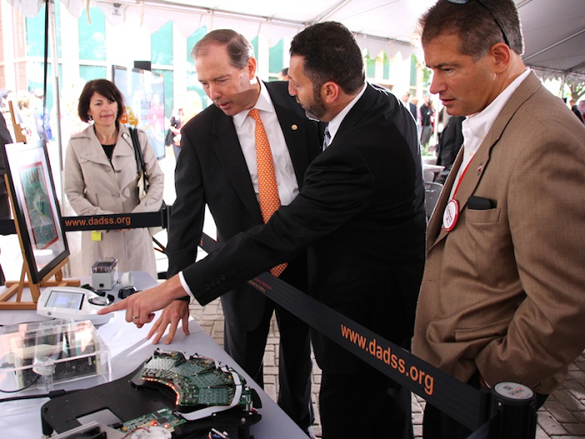 Officials from DOT, and NHTSA show Sen. Udall the latest DADSS prototype technology in drunk driving prevention. Courtesy photo.
SENATE News:
WASHINGTON, D.C. – U.S. Sen. Tom Udall, D-NM and more than 300 members of Mothers Against Drunk Driving (MADD) from New Mexico and across the country demonstrated exciting progress that has been made toward developing lifesaving drunk-driving prevention technology, known as the Driver Alcohol Detection System for Safety (DADSS).
Udall, a long-time advocate for eliminating drunk driving, joined officials from the U.S. Department of Transportation (DOT), the National Highway Traffic Safety Administration (NHTSA), and U.S. Rep. Nita Lowey, D-N.Y., at a news conference at DOT Headquarters to show off the latest DADSS prototype.
DADSS has reached a critical milestone—it has been developed into a working model that can detect whether a driver is over the legal blood alcohol limit. The next stage is to shrink the technology so it can be installed in cars and prevent people from driving while intoxicated.
More than 10,000 people were killed in alcohol-impaired driving crashes in 2013—accounting for nearly one-third of all traffic-related deaths in the United States, according to the Centers for Disease Control. Udall and other drunk-driving prevention advocates believe that installing DADSS in cars could save thousands of lives a year.
“Anyone who gets behind the wheel while impaired should not be able to drive—period. New technology is key—DADSS could save 59,000 lives over 15 years and up to $343 billion. I’m extremely encouraged by the demonstration today, which shows how far we’ve come,” said Udall, who spoke at the news conference in front of exhibits demonstrating how cutting-edge breath and touch sensors can detect a driver’s blood alcohol content.
To keep up the progress, Udall announced that he will re-introduce the ROADSAFE Act to extend funding for the DADSS program. The measure was previously included in the 2012 surface transportation bill, which authorized up to $12 million per year in funding for five years.
“We’re now at a critical moment with DADSS technology,” said Udall, who has championed efforts to prevent drunk-driving fatalities since he served as New Mexico’s Attorney General from 1990-1998. “We need to keep up the investment so we can see the day when driver detection technology is actually being used to keep drunk drivers off the road.”
“New Mexico’s experience shows how progress is possible,” Udall continued. “In the early 1990s, New Mexico had up to 500 DWI deaths a year, the highest rate in the nation, and a tragic statistic. We’ve worked very hard to bring that number down, and we have. Any number of preventable deaths is too high, but we know that through tough laws, increased awareness and new technology we can make progress.”
Menu
Los Alamos
61°
Fair
6:56am4:51pm MST
Feels like: 59°F
Wind: 8mph NNE
Humidity: 17%
Pressure: 30.26"Hg
UV index: 1
WedThuFri
59/36°F
59/34°F
55/32°F
Weather forecast Los Alamos, New Mexico ▸