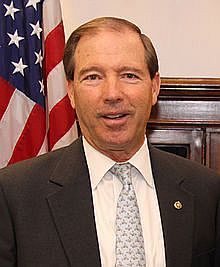 U.S. Sen. Tom Udall
WASHINGTON, D.C. – U.S. Sen. Tom Udall, D-N.M., issued the following statement on the Senate vote to end the government shutdown:
“Reason has finally prevailed in Congress, and we have a bipartisan agreement that will enable us to re-open the government, pay our bills and begin to restore the damage the shutdown caused to our economy. I’m also pleased the agreement includes a provision I fought for that will ensure retroactive pay for federal workers in New Mexico and across the country who were furloughed through no fault of their own.
“I hope we’ve reached a turning point for Congress that will result in greater bipartisan cooperation. No matter who is in charge, no party should hold the country hostage to make a political point. I’m relieved to return to focusing on strengthening our country and our economy, and finding a sustainable, long-term solution to our nation’s finances.”

U.S. Sen. Martin Heinrich, D-N.M., released the following statement today after voting in favor a bipartisan measure containing an agreement reached by the Democratic and Republican leadership of the Senate to reopen the government and avert default.

“This bipartisan agreement reopens the federal government, averts a default on the nation’s obligations, and allows thousands of New Mexicans to return to work.  I’m relieved for the New Mexicans who suffered through this crisis.  But the sad truth is that this was all avoidable.  New Mexicans paid a heavy price because of the reckless and irresponsible antics of a small faction of Tea Party Republicans who were willing to risk economic calamity to get their way.

“Our economy desperately needs long-term stability.  I hope that today’s agreement, and the willingness shown by reasonable minds to work together, will mark the end of governing by manufactured crises and open the door to broader budget discussions and long-term solutions. Now is the time for Congress to return to what has always been my focus: restoring the middle-class and growing the economy.”

The Senate approved the measure by a vote of 81 to 18 and it is now in the House of Representatives for final passage.