Udall, Corker: End Use of Burn Pits in Afghanistan 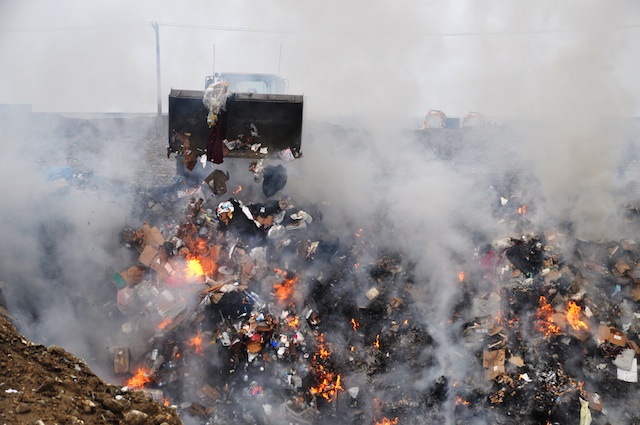 A bulldozer dumps a load of trash into a burn pit just 300 yards from the runway at Bagram Airfield, January 2012. An Army memo from 2011 found the burn pit is associated with ‘long-term’ health effects on soldiers at Bagram. Courtesy/U.S. Army
US SENATE News:

Their letter follows reports by the Special Inspector General for Afghanistan Reconstruction (SIGAR) that found the burn pits were utilized without need and at great danger to the health of U.S. military and civil personnel.

The letter builds on bipartisan legislation coauthored by Udall and Corker and signed into law earlier this year to create a registry of service members and veterans who were exposed to toxic chemicals and fumes from open-air burn pits in Iraq and Afghanistan.

In the letter, the senators noted an April 30, 2013 Inspector General report that found evidence of the ongoing use of open-air burn pits in Afghanistan despite regulations against their use when on-base incinerators are available to dispose of and burn trash instead. The report was followed up by an “alert letter” by the SIGAR July 11, 2013.

According to the July SIGAR letter, incinerators are not being used — or are not being used “to full capacity” — because “a contract for their operation and maintenance had not been awarded,” despite $11.5 million spent to purchase and install the incinerators. “As a result, the camp was relying heavily on open-air burn pit operations to dispose of its solid waste. However, Department of Defense guidance and a U.S. Central Command regulation limit the use of open-air burn pit operations. Camp Leatherneck is in violation of this guidance and regulation,” the SIGAR concluded.

Udall and Corker wrote in response,”We are concerned that despite these precautions required by statute and military directives, our men and women now serving in uniform are still being exposed to open-air burn pits. Last year, we introduced and passed the Open Burn Pits Registry Act, and today we are working to ensure that our veterans and service members are made aware of the dangers posed by their exposure. The men and women of the armed forces serving in Afghanistan deserve better.”

The senators also requested a timeline for the prompt closure of the burn pits at Forward Operating Base Salerno and Camp Leatherneck, both in Afghanistan, and an explanation from the Department of Defense for why it did not fully utilize alternative waste disposal methods. The senators additionally asked that “service members who have been exposed to air pollution caused by the open-air burn pits be notified about the dangers of their exposure, and that their service records indicate that they have served in an area where open-air burn pits were used.”

Udall became an advocate for a burn pit registry after meeting Albuquerque veteran MSgt. Jessey Baca and his wife Maria. MSgt. Baca has faced a multitude of health problems believed to be associated with burn pits and has advocated for helping service members in similar situations.

The law championed by Udall and Corker mandates establishment of an open-air burn pit registry, similar to those created to track Agent Orange and Gulf War Syndrome, for individuals who may have been exposed during their service in Iraq and Afghanistan.

It aims to help the U.S. Department of Veterans Affairs (VA) determine to what extent air pollution caused by open-air burn pits has led to medical conditions among service members. It also includes a public information campaign to inform individuals about the registry and periodically notify registry members of significant developments associated with burn pit exposure.

The registry has not yet been established by the VA, and multiple senators have pressed the VA to accelerate its progress and increase outreach to affected veterans. Udall, a member of the Senate Military Construction and Veterans Affairs Appropriations Subcommittee, successfully included language in the FY 2014 Military Construction and Veterans Affairs appropriations bill urging the VA to detail its implementation efforts for the registry, improve and present a plan for increasing outreach to veterans and their families affected by open-air burn pits, and provide an explanation of how the VA plans to inform VA physicians about the findings of the registry to improve care for veterans. The committee’s report requires the VA to present its plan within 60 days.