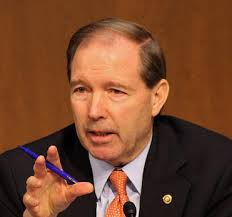 U.S. Sen. Tom Udall
U.S. SENATE News:
WASHINGTON, D.C. – U.S. Sen. Tom Udall has expressed outrage at the ongoing allegations that the Phoenix Veterans Affairs Health Care System and possibly others were covering up the extent of their waiting lists while veterans died waiting for appointments.
In a letter to VA Secretary Eric Shinseki, Udall called for VA officials to expand their investigation to facilities in New Mexico and elsewhere.
Arizona, New Mexico and part of Texas fall under the same Veterans Integrated Service Network (VISN 18).
“I am outraged about reports that VA officials charged with caring for men and women who risked their lives for our nation would concoct such a despicable scheme just to cover up incompetence,” Udall said. “As many as 40 deaths have reportedly already been linked to this mismanagement and cover up, which has been brought to light through whistleblower accounts. Especially as we move to hire a New Mexico VA Health Care director, we need to know soon whether this problem exists in New Mexico and the rest of VISN 18. Our nation’s veterans have earned – and deserve – the best care we can provide, and the VA officials responsible need to be held accountable.”
A signed copy of the letter is available at this LINK. The text follows:
The Honorable Eric K. Shinseki
Secretary
U.S. Department of Veterans Affairs
810 Vermont Ave. N.W.
Washington, DC 20420
Dear Secretary Shinseki
I write concerning the very serious ongoing allegations of mismanagement at the U.S. Department of Veterans Affairs (VA), Southwest Health Care Network facility (VISN 18) in Phoenix, Arizona.  Especially in light of the long-standing and well-documented backlog of veterans’ disability claims, I am outraged that VA officials may have schemed to cover up the extent of the time veterans are waiting for appointments, to the detriment of the health and well-being of men and women who fought for our country.
It is my understanding that the Office of the Inspector General (OIG) has been investigating the Phoenix VA since September 2013, when it first learned of allegations of “secret” waiting lists and as many as 40 deaths resulting from this lack of care.  The “secret” waiting lists, according to whistleblower reports, kept appointment requests out of the VA computer system to cover up a backlog, thereby preventing veterans from receiving the care they have earned and deserve.  If true, this situation is tragic, unacceptable and a great disservice to those who have served in the armed forces.
The OIG’s investigation must be thorough, and responsible officials and executives must be held accountable.  It is urgent that we understand the full breadth of the problem. While the investigation continues, I am calling on the the VA to expand the scope of the investigation to include the operations of all the veterans’ medical centers within VISN 18.
The New Mexico VA Health Care System is in the hiring process for a new director, and when that person comes on board, he or she must know whether similar management failures occurred within the New Mexico VA Health Care system.  Specifically, I am asking the VA to provide the following information:
1. The exact number of veterans who were on the reported “unofficial” or “secret” waiting list, their state of residence, and the type of care they were seeking.
2. If veterans from New Mexico or other states required care in Phoenix, why this care was not made available in New Mexico or within their local VA Health Care system.
3. Any actions VA is taking to address these reports, and what impact these actions will have to improve the quality of care at the New Mexico VA, as well as its Community Based Outpatient Clinics.
4. Whether there is now or has been any “unofficial” or “secret” waiting list or separate waiting list outside the computerized system used anywhere in the New Mexico VA health care system, and if so, which VA managers oversaw that process.
Our veterans have earned the best care we can provide, and they deserve honesty and transparency when the system falls short.  We must bring to light any further issues that might be preventing them from receiving this care.  And the VA must hold officials accountable and fix any management issues to improve quality and efficiencies in the New Mexico VA Health Care System and other health care systems within VISN 18.
Thank you for your service, and I look forward to a reply.
Menu
LOS ALAMOS