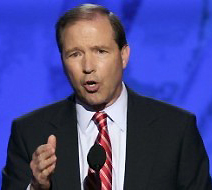 WASHINGTON – U.S. Sen. Tom Udall, D-N.M., announced Thursday that he is joining a bipartisan group of senators in cosponsoring a bill to protect military pay in the event of a government shutdown.

The Military Pay Protection Act, which is based on a similar proposal introduced in January, would ensure the nation’s military families, including National Guard units assisting in disaster recovery, and critical Defense Department civilian workers, would not see a delay in their paychecks if the government were to shut down.

“Our military men and women put their lives on the line for our safety and security,” Udall said. “The least we can do is ensure they aren’t harmed financially by the dysfunction in Washington.”

Earlier Thursday, Udall delivered a speech on the Senate floor and spoke to reporters in a news conference call about the impact the looming government shutdown would have in New Mexico.

Audio of the press conference call is available HERE.

Udall expressed his frustration with how much time and money are being wasted as federal agencies in New Mexico and across the country prepare for a possible shut down.

“I’m pretty tired of these threats, and I know New Mexicans are too,” Udall said. “I’m doing everything I can to prevent this from happening again.”

New Mexico has about 27,000 federal civilian employees, more military members, and thousands of other contractor employees. If the government shut down, even for a short time, thousands of employees would be sent home from agencies, including the military bases, national parks and monuments. Veterans’ benefits and military pay could be delayed. And Federal Emergency Management Agency (FEMA) workers, currently in New Mexico tallying damage from the September storms, could be affected.

Udall added that as a member of the Appropriations Committee, he’s working to find common ground with his colleagues not only to move past threats to shut down the government, but to pass full appropriations bills rather than temporary spending measures.

“I’m optimistic we can avoid a shutdown, but Congress can’t keep governing like this. Funding the government in short-term bursts is doing real damage our economy and our communities,” Udall said. “The countless small business contractors that do work for the federal government need certainty – employers don’t hire for 75 days.”

Additionally, the future of some federal work is in jeopardy if Congress can’t pass regular appropriations. In New Mexico, for example, the success of Sandia National Laboratories’ B-61 life extension program, which is a vital part of the nation’s stockpile stewardship program, depends on our national labs receiving the funding they need to carry out their mission.

“I’ve been working with Energy Secretary Moniz to discuss ways we can keep the B-61 program on track – as a matter of national security,” Udall said. “And as a member of the Appropriations Committee, I’m talking with my colleagues constantly to try to find common ground. I’m urging Congress to think about the taxpayers and work together to move past these fights.”