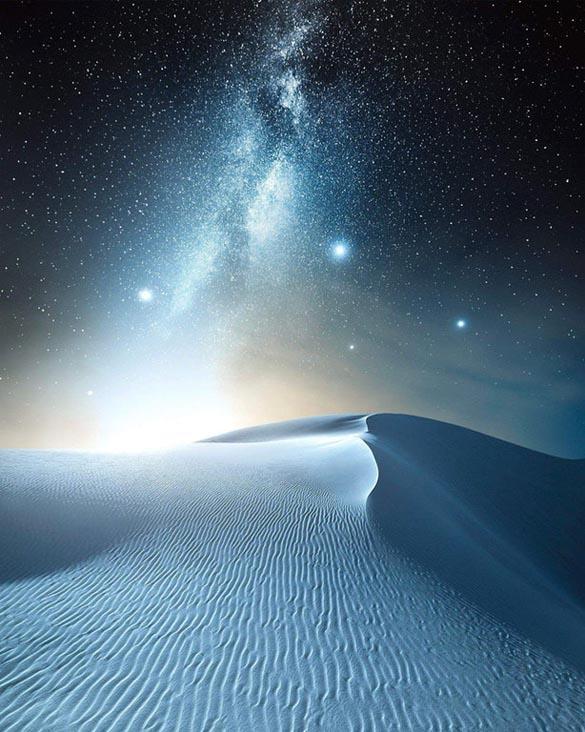 “The vision to create White Sands National Park has been driven by a diverse coalition of community leaders and local elected officials for years. By elevating White Sands National Monument to a national park, we can help boost the local economy and ensure the monument receives the recognition it deserves, while enhancing the military mission at WSMR,” Sen. Heinrich said. “Everyone who visits White Sands marvels at its remarkable geology, spectacular scenery, and outstanding recreation experiences. And the broad regional support we’ve received for what could be our state’s second national park demonstrates the endless opportunities this designation would offer to communities and local businesses across southern New Mexico.”

Since White Sands National Monument was established in 1933, it has attracted visitors from around the world. For the last two decades, White Sands has seen more visitors than any other National Park Service site in New Mexico – an average of more than half a million people each year.

In 2016, visitors to the monument spent $29.3 million in the local economy, with 98 percent of that coming from non-local visitors. Becoming a national park would immediately bring new attention and prominent inclusion in global and domestic travel materials, allowing for even better resource protection, interpretation and visitor services.

According to a new report released Friday by Headwater Economics, in the eight peer National Monuments redesignated as National Parks examined, visits increased by 21 percent, on average, in the five years after redesignation compared to the five previous years. Additionally, the report shows that redesignation of White Sands may result in between $6.2 million and $7.5 million in new spending, 84-107 new jobs and between $2.7 million and $3.3 million in labor income. A copy of the Headwater Economics report is available here.

Sen. Heinrich was joined in Las Cruces by area community leaders and elected officials for the announcement in support of the White Sands National Park Establishment Act.

“The Alamogordo Chamber of Commerce Board of Directors enthusiastically supports the White Sands National Park Establishment Act. We appreciate the extraordinary amount of time and consideration Sen. Heinrich has dedicated to crafting legislation that brings benefit not only to Alamogordo and its business community, but our military partners as well. It is a rare thing in today’s political climate, when legislation is written in a way where there are no losers. The Alamogordo Chamber of Commerce wishes to extend our sincere appreciation to Senator Heinrich for having accomplished this feat,” said Alamogordo Chamber of Commerce President and CEO GB Oliver. “The White Sands National Monument is a special place. If anywhere deserves the national park designation, it does,” State Sen. Ron Griggs (R-34) said.

“As a resident and the Mayor of Alamogordo, the gateway to White Sands, I am very excited about the possibility White Sands National Monument may become White Sands National Park,” Alamogordo Mayor Richard Boss said. “I believe this designation change would bring a significant increase in economic activity in and around Alamogordo. We are very fortunate to have this natural wonder in our backyard. Visitors from around the world will become more aware of White Sands with the ‘park’ designation. I want to personally thank US Sen. Martin Heinrich and NM Sen. Ron Griggs for their commitment to this possible designation change,”

“The Town of Mesilla has worked successfully to grow the economic benefit of outdoor tourism to our community, continues to recognize the importance of tourism as one of the cornerstones of our local economy, and desires to pursue new opportunities to increase tourism. That is why I and the Board of Trustees support the White Sands National Park Establishment Act,” Mesilla Mayor Nora Barraza said.

“Tularosa is rich in history, culture, livestock and amazing food. Turning White Sands National Monument into a National Park would not only bring more attention – and tourism – to the region and our quaint village, but also help preserve this beautiful area and highlight for all the history it contains. “I hope the national park name inspires more locals and visitors alike to embrace their White Sands,” Tularosa Mayor Margaret Trujillo said.

“As an advocate for the military bases in our region and in particular White Sands Missile Range, we appreciate Senator Heinrich and his local staff’s diligent consideration of the Department of Defense’s issues and needs in the designation change legislation. The inclusive process provided an opportunity to address existing issues allowing WSMR and White Sands National Park to continue their longstanding partnership that truly benefits our region, state and nation,” said Las Cruces Chamber Military Affairs Committee Chairman Bill Connor.