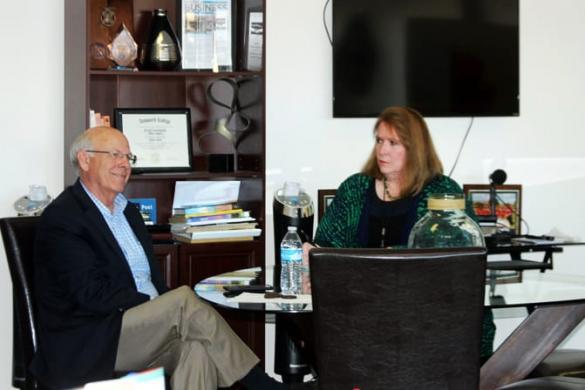 U.S. Rep. Steve Pearce speaks confidently about the future of LANL during an interview this afternoon with Publisher Carol A. Clark at the Los Alamos Daily Post World Headquarters in downtown Los Alamos. Photo by Bonnie J. Gordon/ladailypost.com

“I am supportive of keeping pit production here and will fight for that,” Pearce said. “I think the future of LANL is solid and safe and we’re going to keep it that way. I am very supportive of LANL and its mission and of it being here in New Mexico and being in Los Alamos.”

There have been news reports recently suggesting the pit production program should be moved to Savannah River National Laboratory in North Carolina. Tuesday evening, the Los Alamos County Council unanimously passed a resolution voicing support for the local pit production to remain in Los Alamos.

Pearce dispelled the notion that President Donald Trump and Energy Secretary Rick Perry may retaliate against LANL because New Mexico did not support Trump in the last election.

Pearce said people tell him they are concerned with the “total hammering” this President is taking.

Pearce is running unopposed on the Republican ticket in the Primary Election for governor of New Mexico. He is on a campaign swing though the northern part of the state, visiting Albuquerque, a couple of Pueblos, Santa Fe, Espanola and Los Alamos. Next, Pearce heads to the southeastern part of the state to make campaign stops over the weekend, he said.

He said that the race between he and Democrat and U.S. Rep. Michelle Lujan Grisham is basically a tie. As a businessman who knows how to grow the economy, polls have him at 58 percent, he said, and regarding checks and balances against the legislature, at 57 percent.

“Even Democrats are alarmed at the direction their Party is taking,” Pearce said. “Many rural areas have been neglected … every place up here is looking for some hope. So, I feel confident all we have to do is the work and I will be elected.”