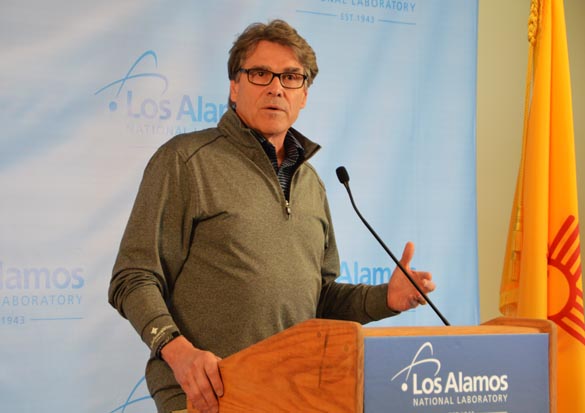 U.S. Energy Secretary Rick Perry speaks with the media this afternoon following his talk with Laboratory employees at TA-3. Photo by Carol A. Clark/ladailypost.com 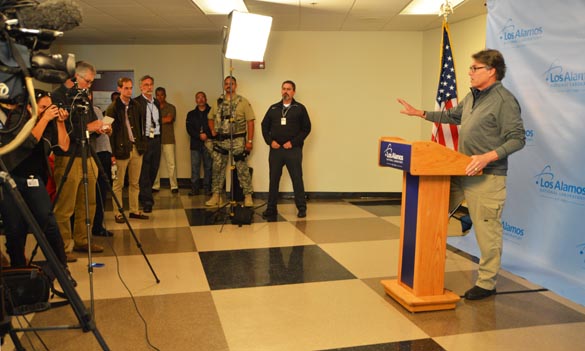 Energy Secretary Rick Perry met with media representatives Wednesday afternoon after he had toured Los Alamos National Laboratory and addressed lab employees. He praised the national labs as a whole and said every country should have at least one lab like the ones we have in the United States.

“We are blessed to have them. I’m excited to be a very hopefully potent spokesman and defender of what they do,” Perry said. He went on to thank LANL Director Charlie McMillan for his hospitality and for the very instructive time spent with him. He said he had read a great deal about the labs but that coming out here and interacting with the men and women is always very important.

When Perry addressed Los Alamos employees earlier today, he said he was “incredibly impressed by the men and women of this lab” and that “your approach to solving national security challenges through science is critical to both our energy and national security.” During his visit, the Energy Secretary visited the Los Alamos Plutonium Facility, the Trinity Supercomputer, and Global Security research and development areas.

“I was very pleased to be able to host Energy Secretary Rick Perry at Los Alamos,” McMillan said. “Today’s visit provided the Secretary the opportunity to see firsthand how the Laboratory uses innovative science and technology to make our nation and our world a safer place.”

Perry said he was at the Idaho National Lab the last two days and would be at the Waste Isolation Pilot Project in Carlsbad Thursday. He said he has seen a lot of the facilities the Department of Energy has relationships with or has oversight of and hopes to be able to make it to as many of them as he can over the coming months and years.

Asked about climate change work, Perry said he is an extension of the administration.

“You’re going to see new ways … to use highly untechnical terms, we’re going to continue to throw some jello at the walls in different places and in different ways because from time to time, you’ll find answers to things you had no idea you were going to find solutions to,” he said.

Perry said he thinks it is very important for him as Secretary of Energy to edify and instruct the American people as often as he can about nuclear power and its potential.

“If you really care about this environment we live in, and the vast majority of the people in the world do, you need to be a supporter of this amazing, clean, resilient, safe, reliable source of energy,” he said.

He expressed the support of the administration for the expansion of nuclear power, not just on the weapon’s side, but from the standpoint of keeping it safe, modernizing it, and having it continue to be a deterrent for those who would do harm to America or America’s allies.

In response to a question about the tunnel deterioration at the Hanford site in Washington state, Perry said the question is why it was allowed to happen.

“That’s a question that needs to be answered. But the good news is that no one was hurt and there was no radiological event. We’re going to study why this happened and how we can keep it from happening again,” he said. “The greater issue is that of legacy waste. I think it’s really important that we no longer continue to kick the can down the road. There are too many places in America where Americans are in jeopardy because the federal government has failed to respond appropriately in moving this waste in a timely way.”

He said he wants to get things done but he is a realist.

“I realize we’re not going to clean it up overnight but we’re going to make progress and we’re going to send a clear message to Americans that we’re going to deal with both the low-level and high-level waste in a thoughtful, safe and appropriate way,” he said, “so that Americans know that they and their families are not going to live in fear of their country having waste scattered and in places that it doesn’t need to be.”

Perry said he visited Yucca Mountain in Nevada, which was the proposed site of the nation’s first high-level nuclear waste repository.

“It was the first site I went to. It is the most studied place on earth and there’s no perfect place, but Yucca Mountain I would suggest to you is as safe as any place in the world and we’ll be making an appropriate announcement about that at the right time,” he said. “The real message was sent by the administration when they put $120 million in the line item to get Yucca back up, so I don’t think that was lost on anyone.”

When Perry was asked if LANL would be sending any resources to Hanford, he deferred to Director McMillan who said responded, “We are available if needed but we haven’t been asked.” Perry said one thing he has learned from his days with the labs and lab directors is there is great interaction.

“They help each other, so the folks at Hanford, if they need technology, if they need personnel from Los Alamos, we’ll load them up and be there,” Perry said.

Asked if he felt Los Alamos was still the place to expand plutonium pit production, Perry said he thinks it is important to keep that potential and possibility on the table.

“We have a clear position on nuclear proliferation and we’re going to address that appropriately but I think to make a hard, fast statement that that’s not going to happen anymore is inappropriate,” he said. “I think you have to make decisions on a regular basis, looking at what’s going on in your own sphere and what occurs globally.”

Perry said he is surprised how little people know about what the Department of Energy does.

“I think I’m apprised almost daily of a new moment that the DOE has come up with. Some of it we can talk about and some of it we can’t,” he said. “Think about our role in new energy sources, our role in being able to analyze what’s going on in the world.”

Perry said one of the most challenging things DOE is dealing with is the Iran nuclear deal and “making sure they are living up to their part of the deal”.

“Whether I think it was a good idea or not, that’s frankly beside the point now. My job as Secretary is to make sure they’re living up to the deal that America agreed to,” he said.

In conclusion, Perry called the lab a fascinating place.

“As I said to the men and women out there today, they are blessed that they get to work in one of the most interesting sites in the world and that what they do makes a real difference in people’s lives,” he said. 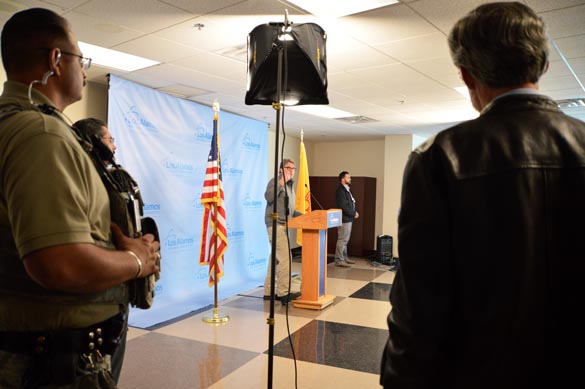 Energy Secretary Rick Perry speaks with the media this afternoon at TA-3. Photo by Carol A. Clark/ladailypost.com 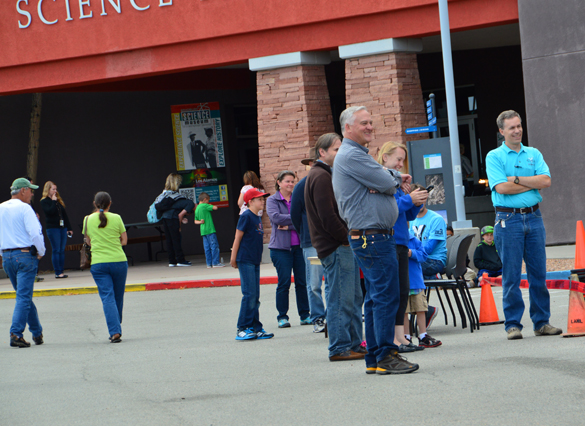 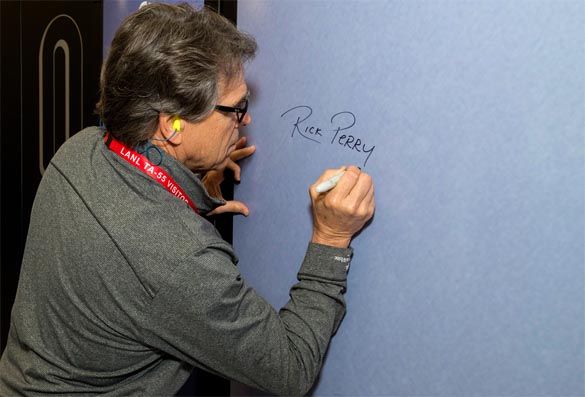 Rick Perry, U.S. Secretary of Energy, adds his signature to the Trinity Supercomputer during today’s visit to Los Alamos National Laboratory. Trinity is the Laboratory’s latest major high-performance computer, with a peak speed of greater than 40 petaflops. A petaflop is one million billion calculations per second. The system is designed to provide increased computational capability for the NNSA’s Stockpile Stewardship program in order to improve geometric and physics accuracy in calculations that can now be completed in weeks instead of years. Courtesy/LANL