Benjamin will travel to Nashville to gauge audience reactions and meet the director and actors with whom he has been collaborating by phone.

New Mexicans will get an opportunity to see a free staged reading of Salt and Pepper at 2 p.m. Saturday, Feb. 23 at Teatro Paraguas in Santa Fe.

In June, a full production of Salt and Pepper will be performed by the Dixon Community Players.

For more than 30 years, Benjamin was a physicist at Los Alamos National Laboratory. He took early retirement in 2004 to devote himself full time to playwriting. Since then he’s seen his work performed at theaters around the country, most often in his home state of New Mexico.

Parted Waters was commissioned and premiered by Arizona Jewish Theatre Company in 2009. The play was an Official New Mexico Statehood Centennial Event during 2012.

Parted Waters is a poignant, often humorous contemporary drama following three generations of a New Mexico Hispanic family who are descendants of conversos (Christians who converted from Judaism.) When a family secret is revealed, they are forced to face personal and cultural identity conflicts.

Although the play is about a specific place, New Mexico, and has a specific background, the history of Secret Jews in the Southwest, the themes are universal.

“The play is about identity and family strife. Those are issues everyone has to deal with,” Benjamin said. 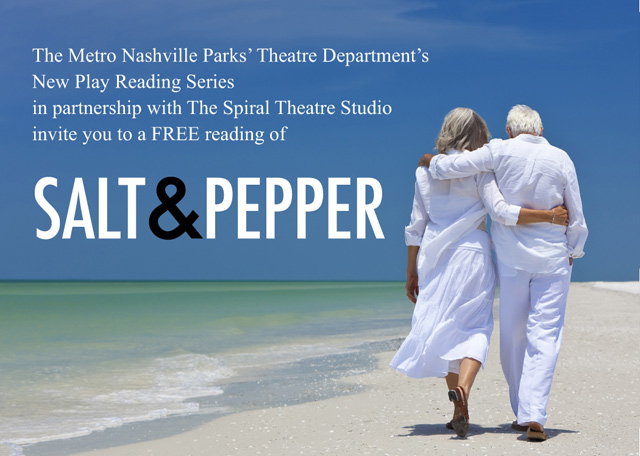 Poster for the production of ‘Salt and Pepper’ in Nashville, Tenn. Used by permission of Metro Nashville Parks.

Salt and Pepper is composed of seven intertwined short plays about aging with grace, courage and humor. The plays are interconnected via theme, characters, actions and language. They all take place within the same fabricated universe.

The short plays vary in length from four to 22 minutes.

“It’s really one play, because it has a dramatic structure over the entire evening,” Benjamin said. “It’s like a string of pearls.”

The play shows older characters in non-stereotypic situations, he said. The characters (10 of the 11 characters are over 60) are older people—not media stereotypes of older people.

“These plays are about dating, identity, love— explored through quirky situations that reveal who we are, he said.

One of the play’s themes is how people handle the role of caregiver. This issue, though seldom explored, is one that affects huge numbers of people.

“About half of the characters are caregivers or have been caregivers recently,” Benjamin said.