CORRECTION: Police did not question Aaron Nguyen a week before his May 7 arrest as previously reported. Other individuals were questioned but Nguyen was not one of them.

Aaron Nguyen, the 18-year-old Los Alamos High School student arrested Tuesday is now charged with burglarizing a number of homes throughout Los Alamos this year and likely stretching back into 2012, according to police. He's left a string of victims in his path including Los Alamos resident Allison Majure. She was driving home for lunch Monday, April 29 when she noticed a teenager pushing a blue recycling roll cart down the street where she lives in Barranca Mesa. 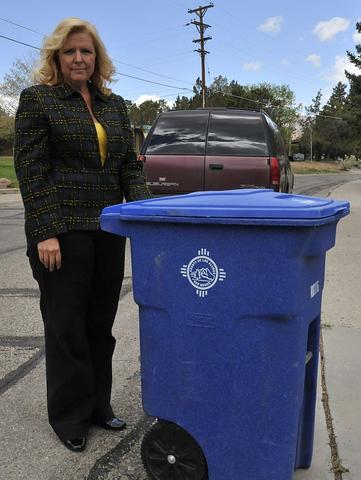 “I just drove by him and thought that’s weird. Maybe he’s playing a prank and mixing up the roll carts,” she said, adding that she continued driving down the street and noticed as she entered her driveway that her roll cart was missing.

“He’s pushing my roll cart!” she said, before backing out of her driveway and pulling up to the teenager now three houses away.

“As I approached him, he looked behind and let go of the roll cart and bolted into the canyon,” Majure said.

The teenager left the cart sitting on the side of the street. Majure opened it and found it loaded with two of her computer monitors, a desktop computer and other items from her home.

“I immediately called 911 and they told me not to touch anything," she said. "911 was so effective with me, they gave me clear instructions: ‘Don’t go in the house, don’t touch anything in the roll carts. Stand by your car and wait for police.’”

Los Alamos Police Sgt. Jeff Reginald and Cpl. Eric Wilhoit arrived quickly on scene, she said, and immediately began to scour the canyon. Police did not find a getaway car in the area.

Once the officers finished their search of the canyon, they helped Majure load the roll cart into the bed of her truck.

"We went back to my house and were met by Det. Daniel Roberts," Majure said.

Roberts searched the house room by room with Majure, looking for locations where the burglar may have left fingerprints.

“The house was staged for the thief to come back a second time. He had brought in a container from my garage to put more stuff in and had disconnected our printer. We found a footprint,” Majure said.

The print did not match the shoe size of anyone living in the home, she said.

“Det. Roberts began unloading my roll cart, item by item, asking me if each item was mine," Majure said. "He finally came to a blue duffle bag. Inside the bag was a loaded Glock gun with a bullet in the chamber and a burglar kit."

Majure works in public relations at the Los Alamos Department of Public Utilities. When she returned to work, she shared her story with other’s in the office. The meter readers, who are usually outside during the day, happened to be in the office and heard Majure’s story.

“I saw that guy this morning,” said Dominic Salazar, one of the meter readers. 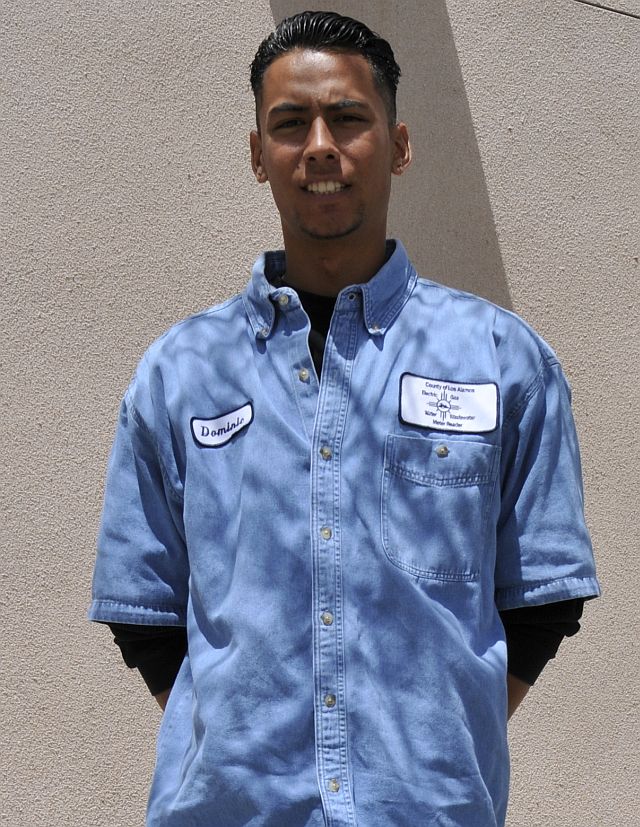 Dominic Salazar, a meter reader with the Department of Public Utilities, made the key identification of the burglary suspect. Photo by Greg Kendall/ladailypost.com

Salazar happened to be reading the meter at Majure’s home earlier that morning and said he got a really good look at him. Salazar explained that he was standing at the side of Majure’s home reading the meter when an Asian teenager appeared from behind the house. Salazar said he thought it was odd the teen was there and that maybe the teen was ditching school and was coming out of the canyon through Majure’s yard.

As they stood looking at each other, the teen seemed to be fumbling for something in a blue duffle bag, Salazar said. After a moment, the teen walked off and Salazar moved on to the next home. A Glock was found later by police in the blue bag, loaded and ready to fire.

Majure had not gotten a good look at the burglar, but Salazar had and he was put in touch with Det. Roberts. Local detectives had compiled a list of suspects from a previous burglary at which the Glock that was recovered from Majure’s recycle cart had originally been stolen. They showed photos of six suspects to both Salazar and Majure. Majure said that she narrowed it down to a couple of the photos. Dominic was clear about a particular photo, which was the teen he had seen at Majure’s home that morning who turned out to be Nguyen.

In the course of their investigation, Det. Sgt. Oliver Morris, Det. Daniel Roberts and Det. Paige Early learned that Nguyen had not been in school during a rash of recent burglaries near his home at 1279 San Ildefonso Road. Nguyen's father granted the detectives permission to search his son's bedroom Tuesday afternoon. They found items connected to many local burglaries including two laptops reported stolen Nov. 11, 2012. Also located in Nguyen's bedroom were stolen firearms, ammunition, computer equipment, cash, jewelry, alcohol, backpacks, camera equipment and a television. Detectives also found a stiletto dagger, a katana sword, a gladius sword and a small brown gun safe containing a Sig-Sauer P220 .45 caliber handgun – all reported stolen. They also found a bag containing flashlights, a slim jim and gloves – items typically contained in a burglary kit.

Nguyen is being charged with aggravated burglary and larceny of a firearm. He has been released from jail on a $69,000 bond.

Majure says of the experience, “All this happened on the same day, this could have been stretched out over a month before I talked to the meter readers. It was really the amazing focus of the Los Alamos Police Department that did this. They were really on it. Every question or communication I had, Det. Roberts was right there. He has always gotten back to me really quickly. “People say, ‘don’t you feel unsafe?’ I feel kind of to the contrary. I’ve been amazed at how well protected we are by our police force. They’ve done right by me. That’s all I can say.”

Los Alamos Police Chief Wayne Torpy told the Los Alamos Daily Post Tuesday evening that he is happy the burglaries have come to a conclusion and that his department will be able to return the stolen items to their rightful owners. "I've said many times that the success of our department is directly related to the quality of our officers."

Anyone who has been burglarized in 2012 or 2013 should contact detectives at 662-8222 to determine whether any of the confiscated items belong to them.

Editor's note: Carol A. Clark contributed to this story. 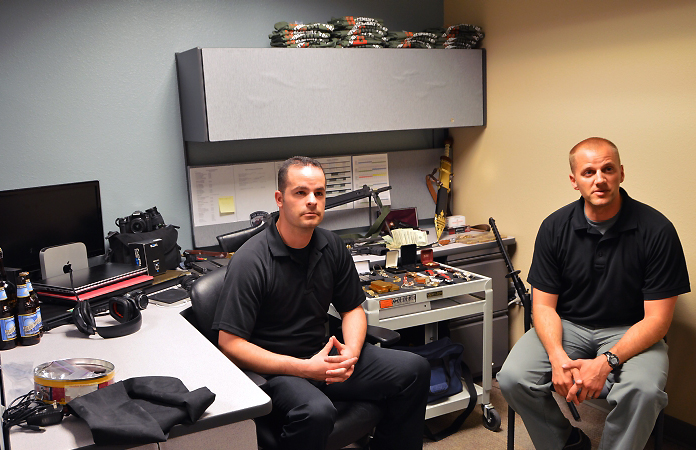