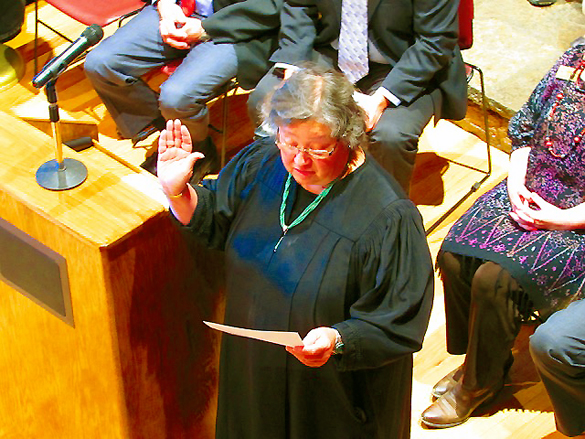 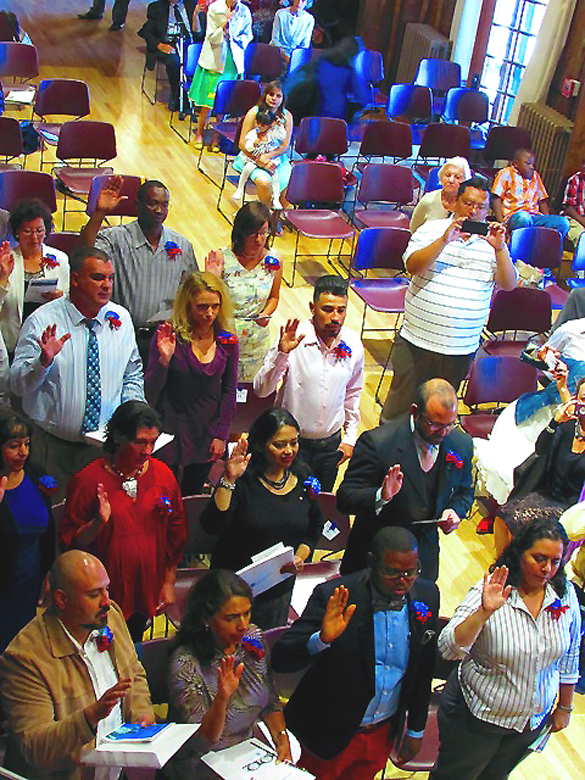 Twenty individuals from 10 countries take the Oath of Allegiance during Saturday’s Naturalization Ceremony at Fuller Lodge. Photo by Kirsten Laskey/ladailypost.com
By KIRSTEN LASKEY
Los Alamos Daily Post
Chief U.S. District Judge Christina Armijo conducts the Oath of Allegiance for 20 individuals from 10 countries during the second annual Naturalization Ceremony hosted by the Rotary Club of Los Alamos Saturday at Fuller Lodge.
During the ceremony, Rotary Past President James Nesmith reminisced about his work as an immigration officer. He recalled the Russian woman, who upon hearing that she was granted U.S. citizenship, leapt up and gave Nesmith a bear hug.
Being an immigration officer, Nesmith said, was challenging but “so incredibly satisfying.” He added that those individuals working toward U.S. citizenship were inspiring.
“The energy and determination they displayed was incredibly amazing,” he said.
To the newest crop of U.S. citizens, Nesmith said, “What you have done will impact you, your children, your children’s children and on into the future.”
County Council Vice Chair and Research Scientist David Izraelevitz was the special guest speaker during Saturday’s Naturalization Ceremony. He spoke about his own experiences immigrating to the U.S. from Uruguay. Izraelevitz was 11 years old when his family arrived in America.
During his presentation, Izraelevitz remembered how the English language initially sounded like a dog growling and his awe of the supermarket with its breakfast cereal, shopping carts and automatic doors. “Everything in America was oversized,” he said. He added that the newest U.S. citizens have his admiration. 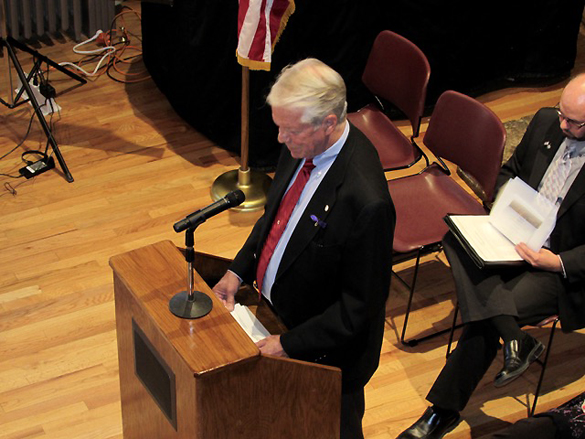 Rotary Past President James Nesmith addresses the audience gathered Saturday morning for the second annual Naturalization Ceremony at Fuller Lodge. Nesmith is the chair of this annual event. Photo by Kirsten Laskey/ladailypost.com 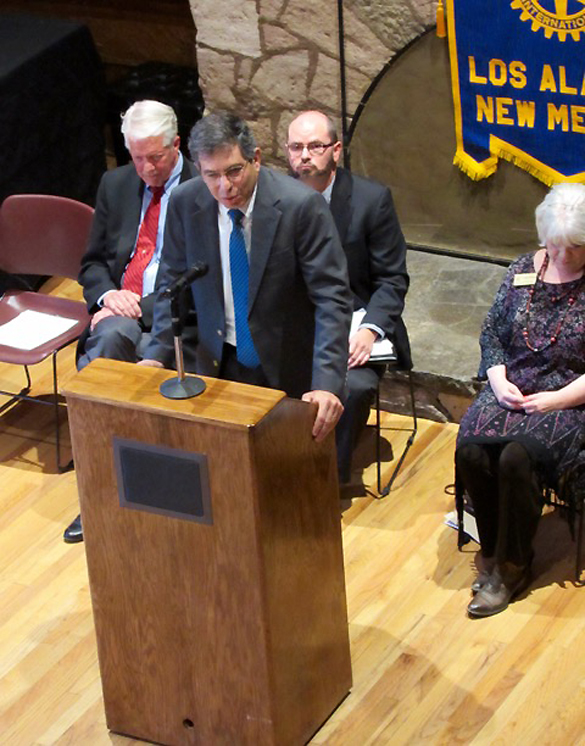 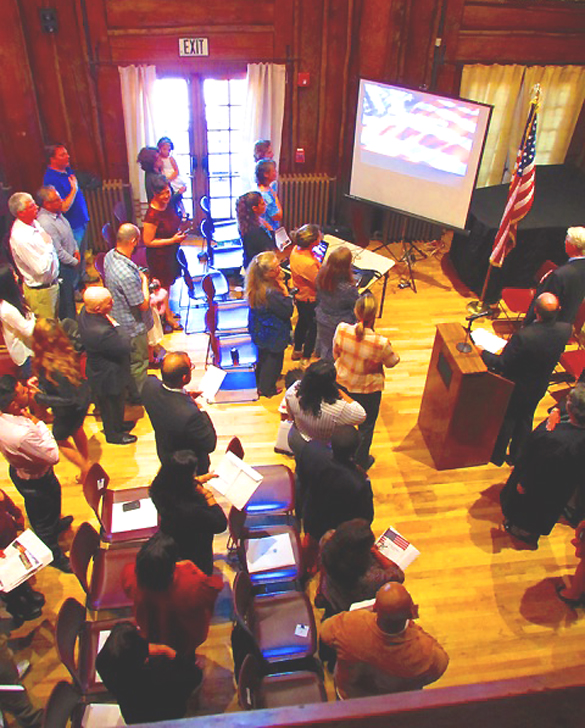 The new U.S. citizens recite the Pledge of Allegiance. Photo by Kirsten Laskey/ladailypost.com 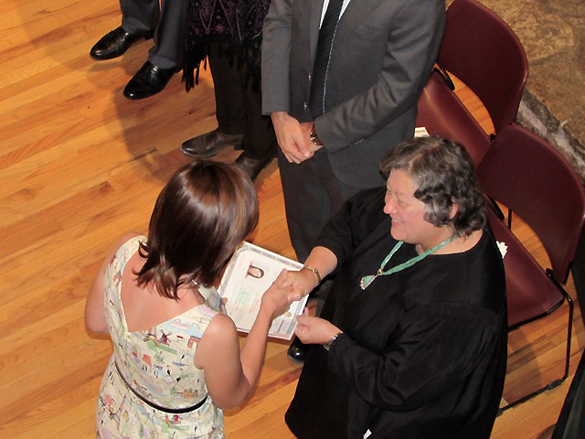 One of America’s newest citizens receives her certification and a congratulatory handshake from Chief U.S. District Judge Christina Armijo. Photo by Kirsten Laskey/ladailypost.com 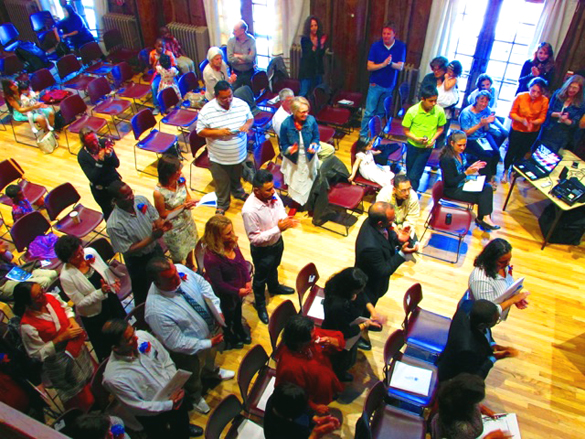 Applause breaks out after 20 individuals officially became citizens of the United States of America. Photo by Kirsten Laskey/ladailypost.com 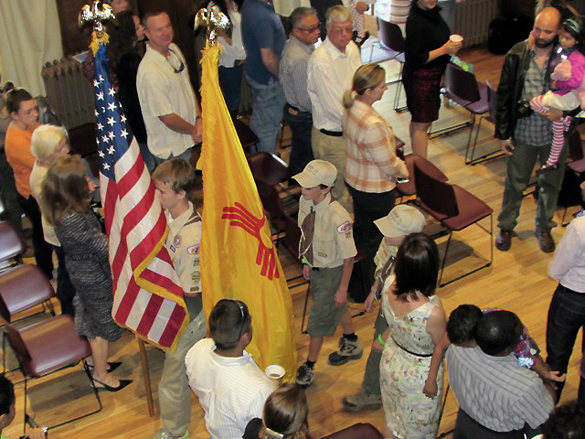