NMED Ryan Flynn
NMED News:
ALBUQUERQUE ― Natural Resource Trustees and Chevron Molycorp Inc. reached a $4 million settlement to restore natural resources injured as a result of releases of hazardous substances from the Chevron Molycorp mine facility in Questa.
The Trustees will use the money to implement restoration projects that benefit natural resources through the implementation of restoration projects that have yet to be specifically selected.
Such projects would be implemented in the area of the mine facility and include projects that compensate for injury to groundwater and habitat resources injured, destroyed, or lost as a result of the release of hazardous substances.
In addition, 225 acres of land called the Anderson Ranch is to be transferred to the Bureau of Land Management for conservation and natural resource protection. Chevron Molycorp will also reimburse the Trustees for their assessment costs.
The Trustees in the case are the State of New Mexico, the U.S. Department of Agriculture Forest Service and the U.S. Department of the Interior. The consent decree outlining the settlement was approved by the U.S. District Court for the District of New Mexico Sept. 30, 2015.
“Under Gov. Susana Martinez’s leadership, the New Mexico Environment Department has collected more fines from mining companies than any other previous administration in the history of the State. We are continuing to ensure that mining companies are held accountable to the State’s regulations which protect New Mexico’s unique environment without destroying lives, livelihoods, and good jobs,” said New Mexico Natural Resources Trustee and Environment Secretary Ryan Flynn. “The upcoming work of the Office of the Natural Resource Trustee will include fostering the public process for selecting environmental restoration projects.” 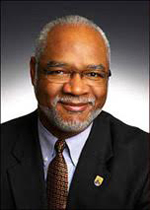 Dr. Benjamin Tuggle, Southwest Regional Director for U.S. Fish and Wildlife Service
“On behalf of the federal agencies, I would like to express my gratitude to all those who have collaborated to achieve this settlement agreement,” said Dr. Benjamin Tuggle, Southwest Regional director for the U.S. Fish and Wildlife Service. “Because of this agreement we will be able to address the injuries to our trust resources and identify restoration projects that will enhance important habitat for native fish and wildlife.”
The Trustees’ next step will be to conduct a public information meeting that will explain the process for identifying and selecting restoration projects to offset the natural resource injuries.
The meeting date will be announced in the local media and on the Office of Natural Resources Trustee website. Members of the public are encouraged to attend the meeting to learn how to submit restoration project suggestions to the Trustees.
Menu
Los Alamos
46°
Fair
6:58am4:51pm MST
Feels like: 46°F
Wind: 0mph WSW
Humidity: 22%
Pressure: 30.34"Hg
UV index: 0
ThuFriSat
59/37°F
57/36°F
55/32°F
Weather forecast Los Alamos, New Mexico ▸