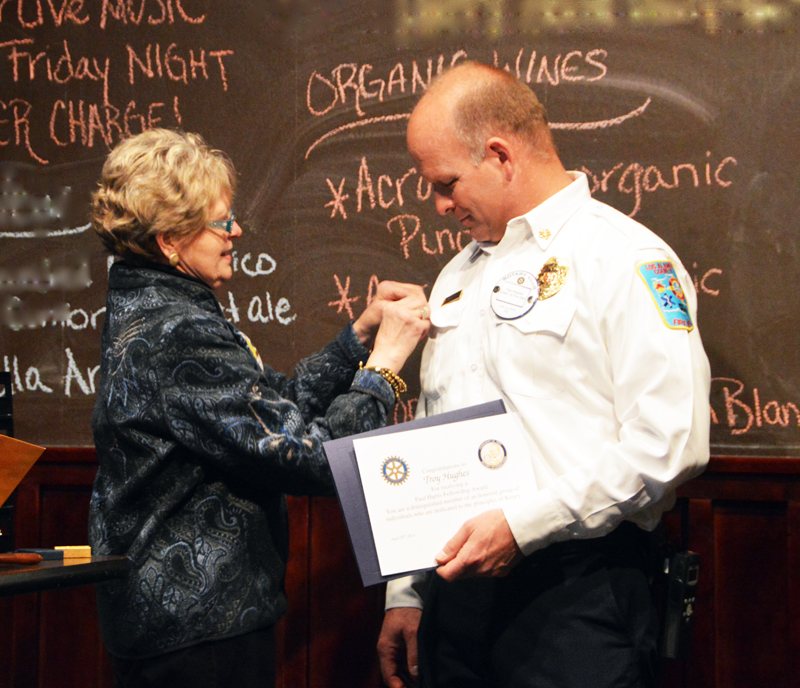 Rotary Immediate Past President Linda Hull presents Rotarian Troy Hughes with his Paul Harris Fellow pin Tuesday during a meeting at the Manhattan Project. Photo by Carol A. Clark/ladailypost.com

Rotary Club of Los Alamos President Elect Troy Hughes recieved his Paul Harris Fellow recognition during a meeting Tuesday at the Manhattan Project Restaurant. Hughes is the Los Alamos County fire chief and will become president of the local service organization in July.

The Paul Harris Fellow recognition acknowledges individuals who contribute, or who have contributions made in their name, of $1,000 to The Rotary Foundation of Rotary International. It was established in 1957 to show appreciation for and encourage substantial contributions to what was then the Foundation’s only program, Rotary Foundation Fellowships for Advanced Study, the precursor to Ambassadorial Scholarships.

The first Paul Harris Fellows include 1937-38 RI Director Allison G. Brush and longtime RI Treasurer Rufus F. Chapin, both for donations made in 1946. Mrs. Adan Vargas was the first woman to receive the recognition, for a gift made in 1953. Mrs. Harry L. Jones was the second, and one of only five people recognized for contributions made in 1957.

Rotarians have a tradition of supporting the Foundation by honoring others. Ida LeTulle Taylor became a Paul Harris Fellow in 1978 when her husband, then-District Governor Vann Taylor, made a donation in her name in honor of their 34th wedding anniversary. The gift also made her the 25,000th Paul Harris Fellow.

At the International Assembly in 1979, then-RI President-elect James Bomar challenged each Rotary club to make one non-Rotarian a Paul Harris Fellow. The Rotary Club of Pikesville, Maryland, USA, responded by making a donation in the name of Mother Teresa in 1980. The entertainer Pearl Bailey also became a Paul Harris Fellow through a joint effort of the Rotary clubs in Cape Cod, Massachusetts.

The number of Paul Harris Fellows reached the one million mark in 2006.