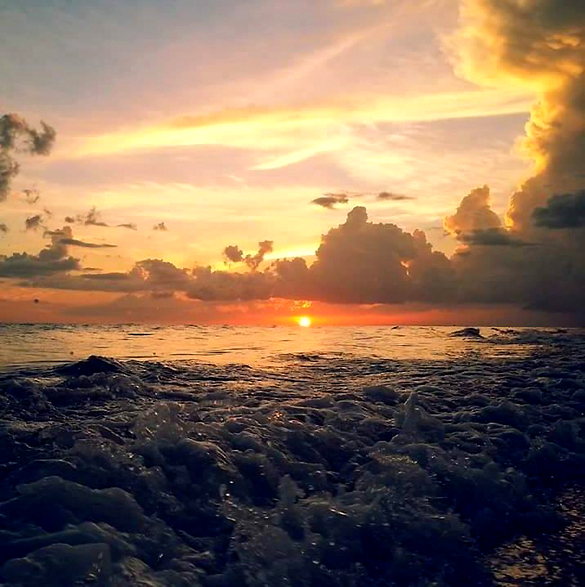 A niece of former Los Alamos County Administrator Max Baker and his beloved wife Kathryn took this photo in the Gulf of Mexico and it is a fitting way to honor him. Photo by Carol A. Clark/ladailypost.com 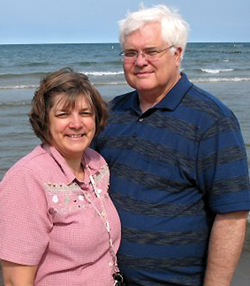 Former Los Alamos County Administrator Max Baker died Oct.19, 2016 at his home in Farmington, Utah. He was 65 years old and had battled cancer for two years.

County staff held Baker in high esteem and as a way to honor him on his last day of work; Baker was taken on a special bus tour of all the County departments and facilities spread around town at that time. Employees turned out at every stop to thank him, hug him and wish him the best in his retirement.

Baker married the love of his life Kathryn 38 years ago. She spoke about him Wednesday afternoon from her Utah home.

“Max approached his employment as more of a mission in life. He made sacrifices for the calling of working for the employees and the citizens and it was wonderful that the people of Los Alamos appreciated him,” she said. “When Max spoke you knew you better listen to what he had to say because it was always very well thought out.”

Baker was highly regarded throughout the entire community and several people particularly close to him have shared their thoughts with the Los Alamos Daily Post.

“I first met Max when I became Fire Chief in 1992. Max was the Director of Finance and was also a new hire that year; he said he was from Farmington and it took me several years to figure out the Farmington he was from was in Utah and not New Mexico, he laughed about that one a lot. Although I was the new Los Alamos fire chief, I was not a rookie fire chief, as I had been the fire chief in Casper, Wyoming since 1986 and I knew how important it was to make sure one understood how the finance chief worked through issues and all the complexities of the County budget.

“Well HELLO and WAKE UP, was I ever in for an education and many tutorials, as our budget was funded and controlled by the Department of Energy, a totally new concept of budget flow than I was accustomed to and Max was a true expert at both the federal and County budget systems. He saved the County millions of dollars throughout his tenure as Finance Director. Max was NOT a bean counter for the sake of counting beans; he was a financial wizard for the sake of better government and a better community.

“The more I worked with the man the more I came to respect, admire and form an everlasting bond with the man. Max was a true believer in RELATIONSHIPS, much like one of our County Councilors Lawry Mann and I suspect he did learn as well as share a lot about relationships with and from Lawry. In any event, the County was certainly fortunate that Max believed in relationships as there was a time, not so much in the distant pass that County Council was doing the revolving County Administrators circus and to whom did THEY go to for stability, well it was Max Baker, of course. In fact they went to him about four times before they finally figured out Baker was the one they were looking for all the time.

“It was Baker as our leader and County Administrator who got things off top dead centre and actually changed the face, the culture and the standing of our great community. Projects, purchases, ideas, growth, relationships, advancements that for whatever reasons could not be accomplished for decades under other County Administrators, were seen to fruition under Max’s leadership and there are oh sooooo many.

“The man saw a lot of strife in his career and worked his MAGIC to the betterment of many and at a great sacrifice to himself and his family. Speaking of family, he has a great one and he treated most folks as if they were a part of his extended family, one could not ask for any greater complement than to be a part of Max’s family.

“There has been so much written about him since his passing, I really can’t do justice to the elegance of the prose already in print; however, I will simply state the he touched the lives of many and always in a positive manner. He was honest, sincere, without an ego, believed there was good in everyone, was a true visionary, everyone he came in contact with is a better person after his touch, and perhaps most of all because he touched so many, he lives on through so many.  Flow this one big boy, I love you man.”

“Max was like a brother to me. He had so much integrity and was behind everything that got accomplished in Los Alamos County even though many people didn’t know it. I learned so much about leadership from Max and grew to love the man more than I can say.”

“Max was such a steady, calm influence for the County. I chose him as my deputy when I became administrator. He knew a lot about the County and how it worked. He cared a lot about people and knew that was what made an organization work. He treated everyone with respect … he never lost his temper, he was even keeled and always went in the right direction and that was the direction that was right for everybody. He was just such a solid person for the County during such turbulent times.”

“I always admired Max’s ability to remain ‘unflappable’ even when faced with some tough situations – from the rebuilding projects after the Cerro Grande Fire to the move of County and Schools off of the Trinity Site (today’s Smith’s Marketplace). He led us through a variety of interesting and complicated issues facing Los Alamos and White Rock through the years, and he steered us through some tight budget times and changes with the LANL contract. He was a great mentor and inspiration to those of us on the management team, always positive and upbeat about our future and respectful of everyone’s opinion.”

“I appreciated getting to work with Max for most of 20 years. He gave me and my family a chance to live the way we do today by hiring me and promoting me. He was always fair and tried to do the right thing for the County and the community.”

“Max Baker was an honorable man and a good friend to those in need. His family was always first and his integrity was above reproach. He had a quiet disposition, but the twinkle in his eyes told you he was pleased with a decision Council had made. I was fortunate to work with him since 1990 and it was after the Cerro Grande Fire in 2000 that he wanted to do something for County employees. He initiated the Employee Appreciation lunch where Council members at that time served the employees. The tradition he started continues today.”

“I was on the County Council while Max was the chief administrative officer of Los Alamos County. I worked extensively with him on Los Alamos issues and governance.

“Simply, he was a great public employee and a wonderful person. He always operated and asked ‘What is best for Los Alamos and its citizens?’ and followed through on the answer. He was kind, hardworking and dedicated to his employees, his community and their elected representatives. His quiet, unassuming leadership was of great benefit to our community during some difficult times.

“He could always be depended upon to what he said he would do. We agreed about most things. Even where we disagreed, he listened, was thoughtful, and created an atmosphere for rational, even-handed discussions. I know of no one who ever questioned his ethics or his commitment to doing the best possible job for Los Alamos.

Max was laid to rest Oct. 21 in Farmington, Utah. 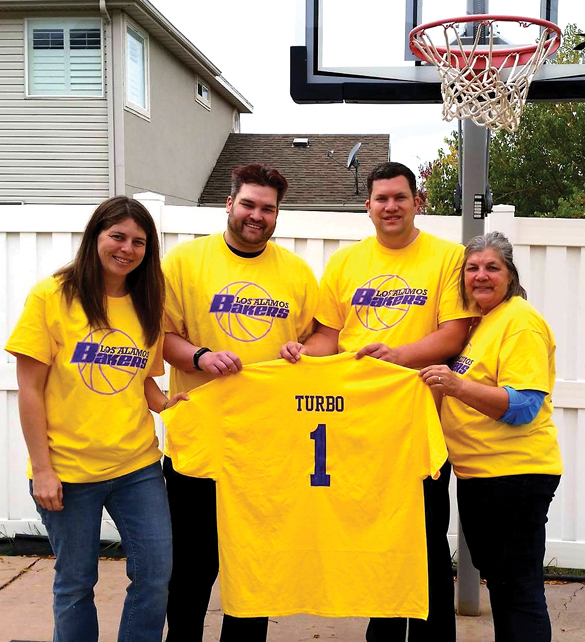