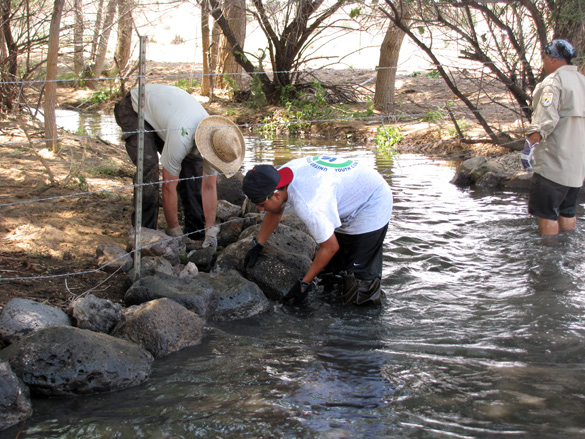 Ask a group of teenagers their idea of fun and you might get answers like hanging out with friends, dodging opponents during a game of laser tag or playing their favorite video games.

But for a group of Native American youth from several of New Mexico’s pueblos, fun meant working outside on a warm, sunny day hauling tons of rock with other tribal youth, community volunteers and staff from the U.S. Fish and Wildlife Service in an effort to restore fish passages along the lower Santa Fe River on Cochiti Pueblo.

Above the loud crunch of gravel being shoveled into buckets and with sweat dripping from their brows and hands rough from a full-days work of loading and unloading bucket after bucket of crushed rock, one could hear the laughter and camaraderie of the four Tribal Youth Conservation Corp (TYCC) team members: Emmanuel Yepa, 16, of Cochiti Pueblo/Northern Cheyenne; Kuien Quintana, 17, of Cochiti Pueblo, Dominic Bailon, 18, of Santo Domingo Pueblo and Xavier Lovato, 17, of Santo Domingo/Cochiti Pueblo.

While fully enjoying and living in the moment as they stabilized the river bank under the watchful eye of their project advisors, these tribal youth TYCC also have a keen focus on their possible future natural resource careers.

“I really enjoy this type of work here on the river,” TYCC member Kuien Quintana said. “I’m hoping for a career down the road where I get to work in the outdoors. That would be cool.”

The TYCC group, along with a crew of nearly 20 people including staff from the USFWS New Mexico Fish and Wildlife Conservation Office (NMFWCO) and tribal volunteers worked to construct low-water fish passage stream crossings and created habitat restoration in order to reduce erosion and river disturbance caused by motorized vehicles and 3-mile section of the river is home to a small population of Rio Grande suckers and provides habitat for wildlife. 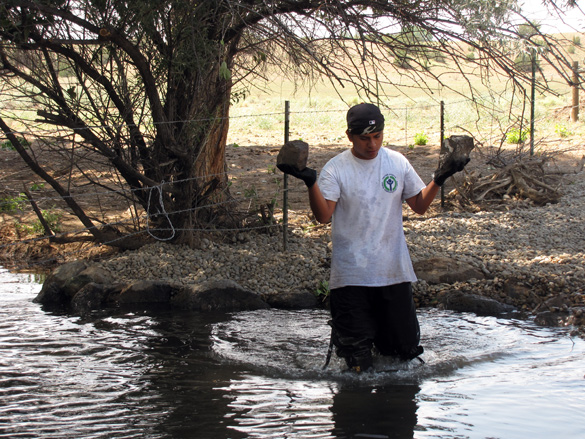 Elementary school students previously planted native plants such as long-leaf cottonwoods, roses and willows along the banks, and the pueblo hopes for the potential reintroduction of Rio Grande Cutthroat trout in the river, which was abundant on Cochiti Pueblo prior to the construction of Cochiti Dam in 1969.

Started in 2012, the Tribal Youth Conservation Corps is a USFWS program geared towards Native American high-school students who work on natural resource conservation projects. TYCC programs are hosted by tribes and hire tribal youth to work on their land.

Through collaboration with NMFWCO, the Pueblo hopes to establish an outdoor classroom for Native American youth emphasizing not only conservation practices, but culture and language. Tribal elders and members of the tribal community will be involved in the development of course curriculum.

“Ancestrally, (the Pueblo people) were farmers and many Pueblo people still farm, so it is always culturally important for us to protect rivers and waterways,” team member Dominic Bailon said.

Bailon has plans to use his experience in TYCC, aim towards a degree in environmental science or wildlife biology, and give back to his community.

The main components of the TYCC program are science, culture, and personal growth, Blue-Sky said. The lower Santa Fe River project is one of four projects the TYCC will conduct on tribal land this year, he said.

“It is so important to these kids to be involved in the restoration of this area because it means so much. The land, the river, the fish and wildlife–it’s all part of who we are,” he said.  “They now understand the value of being proactive and seeking engagement with outside agencies in order to work together towards conservation projects. And this at least puts the seed in their heads that they could actually do this for a living.”

Kitcheyan stressed the importance of the TYCC program in small pueblo communities like Cochiti, population 500 on the pueblo and another 500 living off the pueblo, emphasizing “it is a huge source of pride for these kids. They are getting attention for all the right reasons.

“It allows kids to work on their homeland. They are working for their community and are seen by their community members as potential natural resource managers,” he said.

Prior to the Fish Passage program, staff from NMFWCO would go out after hours and meet native youth and demonstrate unique activities such as electrofishing and help them discover the natural world around them. Eventually, off-duty activities led to official TYCC projects. Such activities, and the eventual creation of the TYCC, help forge strong, trusting partnerships with tribes.

“As an agency, when you show tribes that you’re interested and you are willing to work and take that extra step, that extra mile to earn their respect and trust, it truly opens doors and breaks down barriers,” Kitcheyan said.

Kitcheyan, a member of the White Mountain Apache Tribe and former Youth Conservation Corps participant said TYCC helps instill the importance of their native culture, self-respect, self-confidence, how projects apply to their culture and the value of that culture.

“We also try to help them get that first step towards where they want to go in the future, and that really helped guide me towards a now 19-year career with USFWS when I was in the YCC,” he said..

As the sun began to sink in the sky and the 80 tons of rock were evenly spread out on the river bank, TYCC member Xavier Lovato flipped his bucket over and took a well-deserved rest. Only after the labor was complete did Lovato reflect upon his work.

“We’re leaving something for the future, so we can come back when we’re 30 and say ‘Hey, I did this,’” Lovato said, with a huge grin from ear to ear.