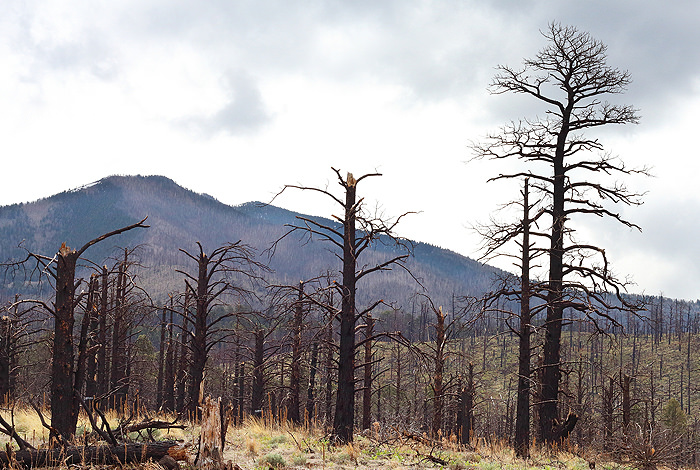 Large trees suffer more than small trees during and after droughts, and while theories had suggested this should be a globally consistent pattern, a new study confirms the concept with a worldwide survey of 38 forests. Courtesy/LANL

In forests worldwide, drought consistently has had a more detrimental impact on the growth and survival of larger trees, new research shows.

In addition, while the death of small trees may affect the dominance of trees in a landscape, the death of large trees has a far worse impact on the ecosystem and climate’s health, especially due to the important role that trees play in the carbon cycle.

“Previous studies at a few sites had shown that large trees suffer more than small trees during and after droughts, and our theory suggested this should be a globally consistent pattern, but this project was the first to test this hypothesis globally,” said Los Alamos National Laboratory’s Nate McDowell, a renowned forest ecologist and plant physiologist who coauthored a paper in the journal Nature Plants highlighting this research.

In a landmark study published this week, a team of researchers studied forests worldwide, ranging from semi-arid woodlands to tropic rainforests, to determine how a tree’s size impacts its response to drought.

The team also included researchers from the Smithsonian’s Conservation Biology Institute and Tropical Research Institute, the University of New Mexico and the U.S. Geological Survey.

Living trees soak up greenhouse gas and store it for a long time in their woody tissues, but dying trees release it—a carbon sink becomes a carbon source.

Morever, larger trees transpire, or release, more water into the atmosphere, cooling the land and supporting cloud formation, which effects how much solar radiation is reflected back to space and impacts precipitation. They also play key roles in biodiversity, creating environments on which many plant and animal species are dependent, McDowell says.

Tree death is often unpredictable, and the work by McDowell and colleagues has helped elucidate many processes. Large trees are more vulnerable, in part, due to their physiology: it’s harder for them to transport the water and nutrients they need to their leaves and evaporative demands are higher. Additionally, large trees with crowns high in the canopy are exposed to higher solar radiation, and the ability to transport water to their foliage is lower.

All of this is compounded by the fact that trees close their stomata (surface pores that control gas exchange) when facing drought to prevent water loss from transpiration, but this can collapse the hydraulic transport system. And as if that weren’t enough, destructive bark beetles preferentially attack larger trees.

Understory trees have it easier, with lower temperatures and wind speeds and higher humidity, and a far shorter distance to transport water from their roots to their canopy. In all of the seasonal tropical forests analyzed by the team, the growth rate of understory trees actually increased in response to drought, possibly due to the increased light reaching smaller trees caused in part by the larger trees losing foliage under stress.

The research project included both natural and experimental droughts. Accounting for standard growth/mortality rates, the team analyzed tree size-related variation responses based on diameter growth and death under drought and normal conditions; and the percentage of drought-related death.

Although a limited sample size precluded rigorous analysis across different forest types, separate analysis was conducted (with data from at least three droughts) for the following subsets: tropical and temperate forests, climates with and without seasonal precipitation flux, broadleaf and needle-leaf forests, and forests with drought deaths not associated with bark beetles.

According to these results and theoretical predictions previously published this year in Nature Climate Change by McDowell, large trees will suffer the most from the triple threat of 1) a warming climate, 2) drier soils and 3) more severe drought stress (intensity or frequency). Researchers note that the global consequences on ecosystem function, biodiversity, and the carbon cycle that begets climate change could be great.

This work was supported by the U.S. Department of Energy’s Office of Science, the Smithsonian Competitive Grants Program for Science and Laboratory Directed Research and Development funds.