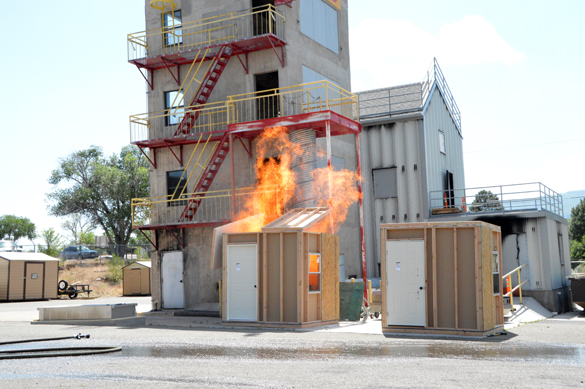 Props for marijuana wax lab training Monday at the LAFD training center on DP Road. Photo by Carol A. Clark/ladailypost.com
By CAROL A. CLARK
Los Alamos Daily Post
Police and firefighters participated in training this week to better understand the processes and dangers associated with marijuana wax labs, following last month’s apartment explosion on Canyon Road.
Marijuana waxing is a relatively new and highly dangerous trend moving across the country. The May 9 explosion was the first such case in Los Alamos County and local first responders initially did not know what they had encountered.
The explosion occurred after Joseph Gonzales, 26, had reportedly been processing marijuana wax for hours in his bedroom with the door and window closed at the Caballo Peak Apartments. He was airlifted to a burn center in Denver and is slowly recovering from his wounds.
LAPD Det. Joseph Robinson said late Wednesday that because the case remains active, he is not able to release new information at this time.
Los Alamos Fire Marshal Jeff Wetteland coordinated this week’s training. He explained that explosives instructor Siegfried Klein traveled from Aurora, Colo., to teach a program called, Safety and Investigative Considerations for the Illegal Manufacture of Butane Hash Oil and Marijuana Grow Operations.” Klein is a fire and explosives investigations captain and commissioned police officer.
“After we had the May 9 event, we looked at our need for training,” Wetteland said. “We invited police and other agencies in northern New Mexico to attend the training as well.”
Klein has 22 years experience as a firefighter and paramedic and is a certified fire investigator and instructor, Wetteland said, adding that he has a lot of experience in this field and has given expert testimony on at least a dozen hash oil explosions.
Klein conducted the classroom portion of his training at Pajarito Cliffs Site Monday, Tuesday and Wednesday mornings followed by field explosive exercises each afternoon at the training facility on DP Road.
Firefighters constructed two rooms complete with typical household items at the back of the training facility. The rooms were filled with butane and ignited. The force of the blast blew off the roofs and fire erupted inside the structures.
The training the firefighters and police officers completed this week is designed to aid them in identifying the signs associated with marijuana waxing operations as well as the dangers.
Wetteland said that since 2014, there have been 42 documented cases of explosions and fires in houses or multifamily structures related to marijuana waxing.
“The use of any explosive liquid or flammable gases inside a residence is extremely dangerous to the health and safety not only of one’s self but the surrounding neighbors,” Wetteland said. “Keep in mind that the use of these flammable gases for illegal activities has criminal intent and the consequences you face will be amplified.”
Menu
Los Alamos
72°
Fair
5:48am8:24pm MDT
Feels like: 72°F
Wind: 5mph NNE
Humidity: 32%
Pressure: 30.29"Hg
UV index: 2
SatSunMon
84/63°F
86/64°F
86/59°F
Weather forecast Los Alamos, New Mexico ▸