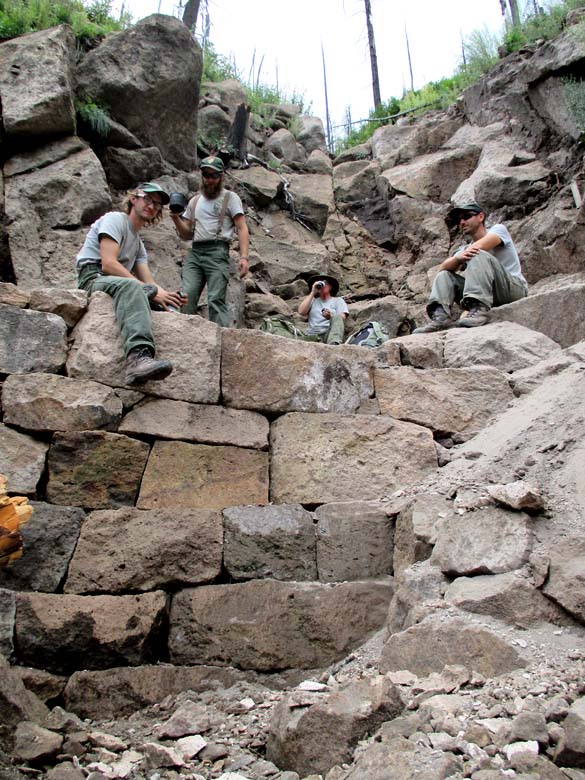 Members of the Chiricahua National Monument trail crew and one of the stone retaining walls they constructed to repair a section of trail at Bandelier. Courtesy/NPS

Bandelier National Monument has just re-opened a segment of backcountry trail that had been closed due to major erosion problems caused by effects of the Las Conchas Fire.

A section of the trail that leads south from Upper Crossing in Frijoles Canyon to the trail junction at the top of the mesa had become impassable as several arroyos deeper than the height of a tall hiker formed across the tread.

This summer a trail crew from Chiricahua National Monument successfully repaired the damage. In six weeks, the six-person crew built four large stone retaining walls, re-established the trail tread, and cleared brush and downed trees from an additional one and a half miles of trail corridor. Adding to the challenge, the trail is within the Bandelier Wilderness, so only hand tools were used.

“With the skilled efforts of some very talented trail workers, this link in our trail system is now open again, and we hope hikers will take advantage of the fall weather to get out and enjoy it,” Bandelier Superintendent Jason Lott said.

This trail is an important link to others leading throughout the Wilderness. It takes some effort, but for well-prepared hikers it provides access to the Alamo Springs and Frijoles Rim trails, and great views of Frijoles Canyon, the Jemez Mountains, the Sangre de Cristo Mountains, Upper Alamo Canyon, and the head of Lummis Canyon.

Those with sharp eyes may pick out one of the few remnants of the Bland Frijoles trail on the south wall of Alamo canyon. In the late 1800’s it was the way from Frijoles Canyon to the gold mining town of Bland in Bland Canyon. And this year, the trails all lead through millions of yellow flowers. 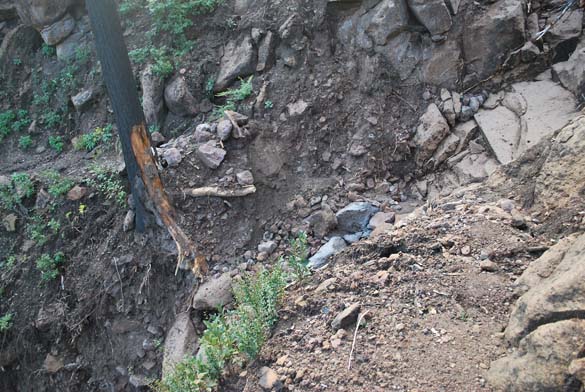 Damaged section of trail at Bandelier before repairs. Courtesy/NPS 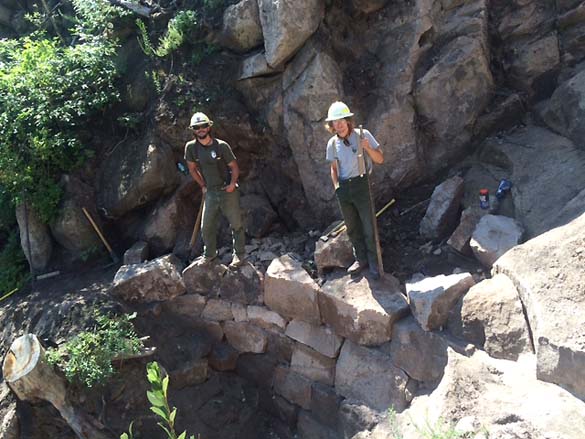