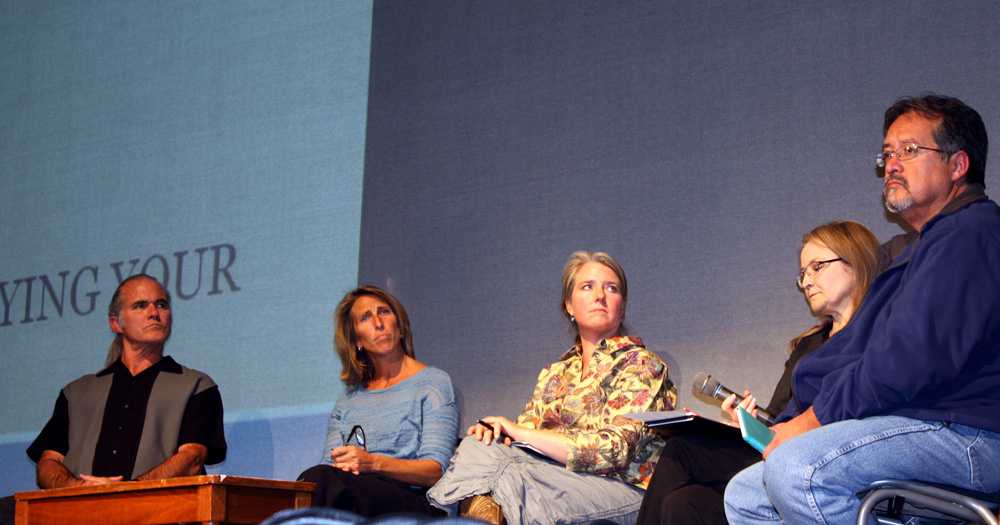 A group of 40-50 concerned parents, community members and educators gathered at Capitol High School in Santa Fe Wednesday to share ideas and concerns and to take part in a Town Hall Meeting on education. The Town Hall was organized by Keep the Promise for New Mexico’s Future, a group of citizens, businesses and organizations committed to assuring quality education in New Mexico.

The Town Hall Meeting was one in a series of four live meetings across the state. Meetings have been held in Albuquerque and Gallup, and another is scheduled next week in Las Cruces. A Telephone Town Hall with more than 9,000 participants statewide was also part of the process. The Town Hall Meetings will culminate in a televised Town Hall on PBS station KNME later this year.

The goal of the town Hall Meetings is to gather input on education from around the state. Participants were asked to share their vision for great public schools in New Mexico as well as challenges facing public education and ways to meet those challenges, said Patrick Davis, executive director of ProgressNow New Mexico, who chaired the meeting. ProgressNow is a non-profit advocacy group involved in civic engagement issues.

“The whole purpose is to get people involved to demand action and do the right thing,” Davis said.

The audience responded to the question, what is your vision for a great public school? The answers were collected into a word matrix placed on a screen. Small classes, respect, inspired teachers and access to services were among the most popular responses.

Mondragon said the students on his bus are not only learning skills at school, they are learning to communicate and prepare themselves for life.

“Moral is diminishing by the day, because of the onerous regulations that are put on teachers,” Ross said. “If the teachers are not inspired, it’s hard to inspire the kids.”

Davis said that 71 percent of people who participated in the Telephone Town Hall across the state thought class sizes were too large. Sixty-eight percent saw a greater need for student services and 65 percent thought there was too much testing.

“The larger the class size, the harder it is for teachers and students to listen to each other,” Tyson pointed out.

Problems identified at the Santa Fe Town Hall included too much testing, lack of access to services, dealing with the results of poverty, low teacher salaries, lack of funding for education and onerous regulatory paperwork burdening teachers.

“The simple joy of learning is dropping dramatically,” Duran said. “We’re putting students in a box. They’re like little robots.”

“Funding for schools has dropped every year, but the challenges we are expected to fix are growing,” Garcia Baca said. “Schools are the center of the community.”

Multicultural education and integration of culture into the classroom were major concerns at the Gallup Town Hall, Davis said.

“Multiculturalism is not looked at as an asset,” Garcia Baca said. “Bilingual education has fallen by the wayside.”

Tyson pointed out the need for teacher autonomy in addressing the diverse needs of varying student populations. “Give us a strong set of standards, but give the teachers the autonomy they need to teach the students,” she said.

“Standardized testing is making things more bland,” Ross said. “Everything is narrowed down to the most common denominator. We’re not allowed to help students think creatively.”

“Our goal as educators is to create lifelong learners and students who love learning,” Garcia Baca agreed. “Students need time with their teachers.”

Several panel members said they felt parents and teachers had been left out of the educational planning process and were not being heard by the Public Education Department.

The need for early childhood education has been an issue raised at the various Town Hall meetings across the state. “We’ve depended on parents for this, but because of poverty in New Mexico, parents cannot always fill this role,” Garcia Baca said.

Low teacher salaries amid rising duties and expectations was another issue raised at the Town Hall Meeting.

“If teachers aren’t valued, no one is going to want to educate your children,” Ross said. “We need to keep telling the legislators what we want.”

Visit Keep the Promise New Mexico’s website at http://www.promisefornewmexico.org/home to see the data they have collected and to learn more about the organization’s efforts to engage citizens in the process of improving education in New Mexico.