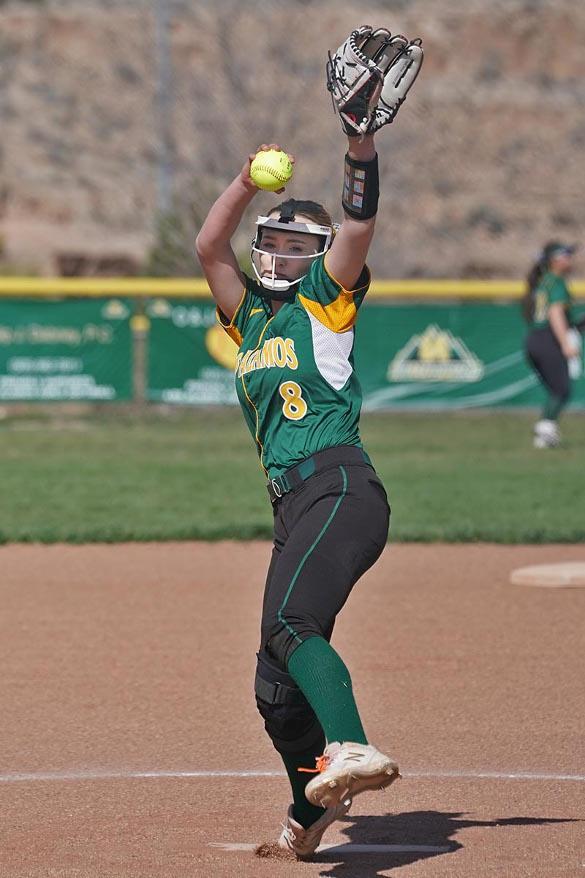 The Lady Toppers Softball team played the Espanola Lady Sundevils at Overlook Park Softball Fields this past Tuesday. It was a wild and crazy game plagued by errors and hit batters by both teams. The Toppers held the Sundevils scoreless for the first two innings. The rest of the innings were played more or less even until the 5th inning when the Toppers put up 6 runs to end the game by the mercy rule 21-11. On the mound for the Toppers was Katie Wimer who pitched to the 6th inning. Photo by John McHale/ladailypost.com 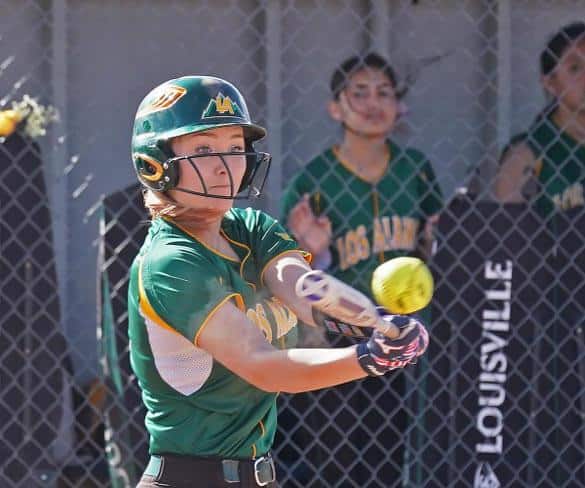 Katie Wimer knew that when she hit the ball it was going to be a homerun and it was the run that won the game, bringing the score to 21-11. She led the team in all the batting statistics. Photo by John McHale/ladailypost.com 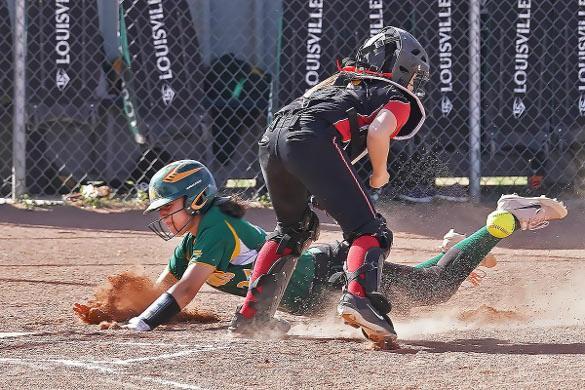 Halle Warwick slides into home plate ahead of the ball for the second run in the 1st inning. Photo by John McHale/ladailypost.com

When Los Alamos High School junior pitcher Katie Winer stepped to the plate in the bottom of the fifth inning, teammate Claire Bluhm was at first base after stroking a single. The Lady Hilltoppers were leading the Espanola Valley High School Lady Sundevils 19-11 in what had been a wild game. Los Alamos had no trouble scoring runs, but the pesky Sundevils kept coming up with enough runs to stay alive and keep the game interesting.

The impatient Los Alamos fans started to yell “Finish it” from along the fence. It was the fifth inning and the 10-run mercy rule was in effect. Two more runs and the Hilltoppers could end the game.

“I heard the fans saying, ‘Finish it,’” Winer said. “If I hit it out it’s over, so I was kind of thinking about it. I tried to swing as hard as I could.”

Winer swung and the ball sailed high and deep over the left field fence. Los Alamos won 21-11 and the game was over.

It was a fitting conclusion to a back-and-forth battle. Los Alamos led from start to finish but could never put Espanola away until Winer’s blast. Los Alamos led 1-0 after the first inning and the fireworks started in the second inning.

Leading 1-0, Halle Warwick led off the bottom of the second inning getting hit by a pitch. Dailynn Rodriguez followed with a shot of the glove of Espanola’s shortstop. Aspen DeHerrera bounced a single up the middle to load the bases. Warwick scored on a fielder’s choice and the bases were still loaded.

A single by Janessa Gonzales scored two runs. Bluhm drew a walk to load the bases. Winer was safe on a fielder’s choice, but Romero was forced out at home. Alicia Gonzales picked up an RBI (run batted in) when she was hit by a pitch with the bases loaded.  Espanola picked up another rout with a force out at second, but another run scored. When it was all over, Los Alamos had score six runs to take a 7-1 lead.

“They scored their runs earlier than what we did,” Espanola Coach Robbie Garcia said.

The Sundevils still were alive after scoring four runs in the top of the fifth inning to make the score 15-11 in favor of the Hilltoppers.

The Hilltoppers began their game-ending rally in the bottom of the fifth inning with Warwick reaching base on an error.  Rodriguez drove her in with a double. DeHerrera singled, as did Romero. Espanola got a forced out, but two runs scored as the Sundevils started to wildly throw the ball around the infield. Bluhm drove in a run with her single, setting the stage for Winer’s homerun titles.

Los Alamos Coach Robbie Harris breathed a sigh of relief after Winer’s home run denied Espanola another chance to stay in the game.

“You can never count Espanola out,” Harris said. “I’m proud of the way Katie pitched today.”

With the win Los Alamos improved to 2-0 in District 2-4A. The Hilltoppers are 9-7 overall. Los Alamos has won the last two District 2-4A titles, but this year they will need to keep pace with Pojoaque Valley High School, which joined the district this year. The Elkettes are 3-0 after sweeping a doubleheader from Taos April 6 at Taos. 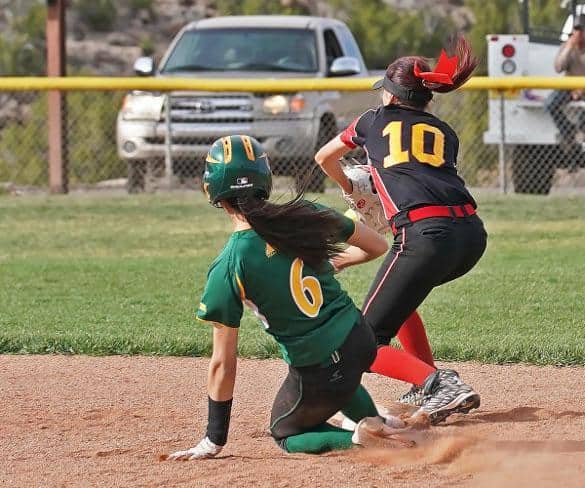 Janessa Luster barely beats the ball in her steal to second base attempt in the 4th inning. She had 4 hits, which accounted for 6 RBIs. Photo by John McHale/ladailypost.com 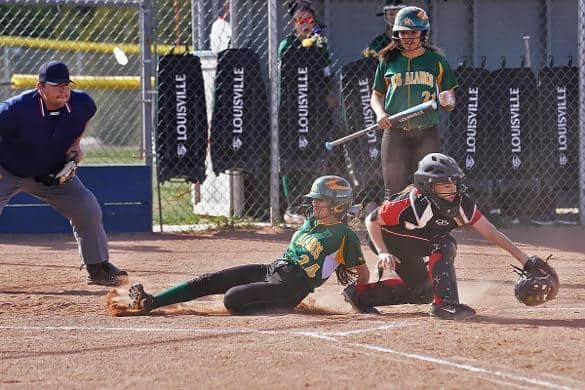 Katrina Sanchez slides past the catcher to score the 7th run in the 2nd inning. Photo by John McHale/ladailypost.com 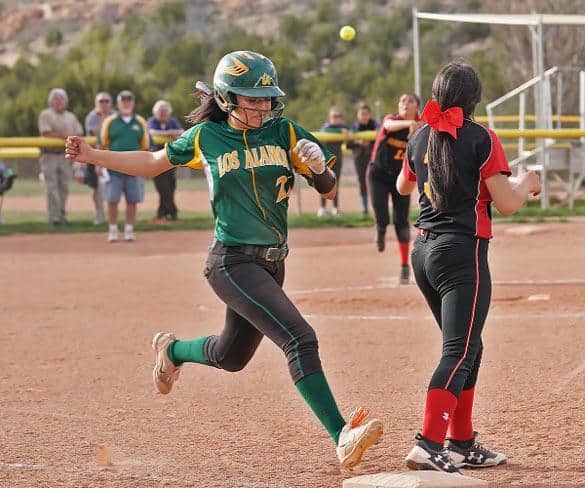 Halle Warwick beats the throw and was safe at first in the 4th inning. Photo by John McHale/ladailypost.com 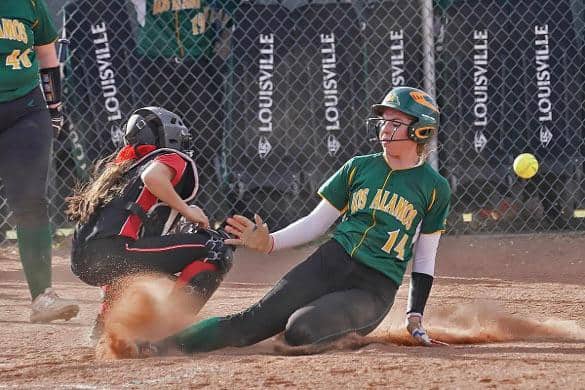 Megan Romero arrives ahead of the ball to score run #18 in the 5th inning. Photo by John McHale/ladailypost.com