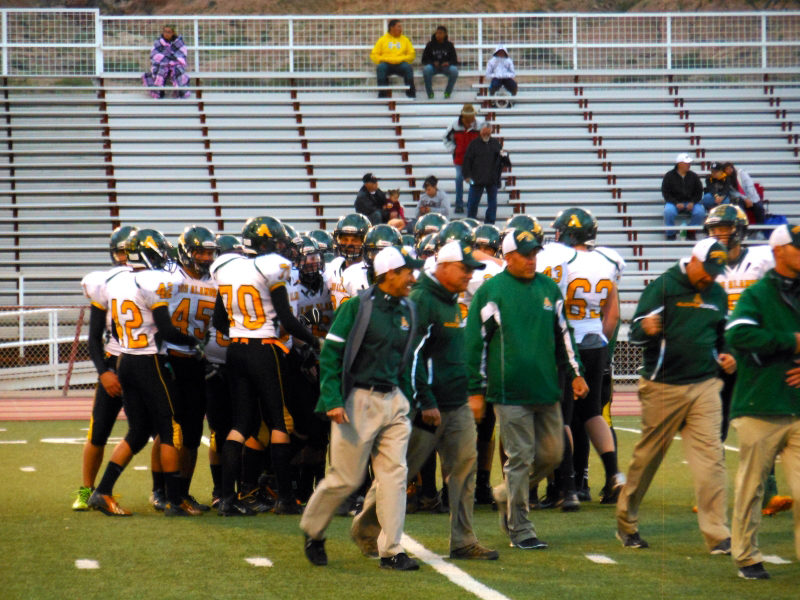 The week after #3 Belen lost a close game to #1 Goddard, #17 Los Alamos came to town. The #2 team (St Pius, which LA should have beat if not for turnovers and some questionable penalties in the last few minutes) lost Friday night and Belen is expected to move into the #2 spot.

Los Alamos is the highest ranked High School in District 2-4A. Last week Los Alamos lost to #15 Kirtland Central , primarily due to four turnovers. One fumble and three interceptions doomed the Toppers in their game against Kirtland. It is always difficult and unusual to win a football game when a team averages more than two turnovers a game, which is the primary reason the Toppers are 1-4. Hopefully the Toppers can solve their turnover problems before District play starts.

The Toppers lost the coin toss and received the ball on the first kickoff while the Eagles selected the side of the field where the wind was more favorable. The O-Line came out controlling the line of scrimmage and the Toppers picked up a first down on the first drive. Unfortunately they punted to the Eagles after the initial first down. Belen drove the ball down the field running with the FB up the middle. They scored by taking advantage of the soft play of the Topper inside linebackers. The first quarter ended with Belen up 7-0.

Early in the second quarter Belen again drove the ball down the field and scored on a 22-yd off-tackle run by the FB. Belen increased their lead to 14-0. The Toppers received the kick-off and went three and out. The punt was muffed by Belen giving the ball to the Toppers on their own 15-yd line. This threat ended with an interception on the Toppers 1 yd line. The defense forced the Eagles into a three and out. The Toppers started a drive on a short field. Tyler Thorn received the ball on a double reverse and scored on a wide open field. The TD was called back on a highly questionable call by an official not in position to see the supposed holding penalty. The Toppers soon after fumbled the ball to the Eagles on a QB toss behind the running back.

The defense held and the Toppers got the ball back. The Toppers drove down the field and scored on a TD pass to Simon Heath in the corner of the end zone. Brian Geyer kicked the extra point. The Toppers tried an onside kick that went out of bounds after only 9 yds. Belen took advantage of the short field and scored a TD on short pass.

Los Alamos took the ensuing kick-off and drove down the field. The Toppers converted two 4th and long plays. After getting into the red zone, the offensive line took over and LA scored on a 2 yd run Xavier by Dennison.

The Toppers discovered that their line can play with the elite programs in the State. For the first time this year the line played as a team. The Offensive and Defensive lines played exceptionally well. The lines are led by Team Captain and Senior Peter Brewer, Senior Brian Geyer and Colin Nicklass, and Juniors Jonathan Shuler, John Dermer, Sam Flesner, Zack Sturgeon, and Connor Temple.

Against Belen, the Offensive and Defensive line stood toe to toe for 4 quarters with the number 3 team in AAAA and won the battle in the trenches. Unfortunately the Toppers lost the game 28-14. A TD was called back by a questionable holding call and there were key turnovers in the red zone, a fumble and two interceptions.

However, the effort and power of the line cannot be questioned. They protected a QB who has difficulty seeing over the line. They opened enormous holes for a FB who has solved his fumbling problems, but still has difficulty seeing the openings. The line is easily the best that the Toppers have had in more than 20 years. The lone bright spot for the Topper skill players is Tristan Hill. Hill has taken the ball from defenders and opposition receivers, fought for the ball anytime the ball is thrown in his direction. More often than not, Hill comes down with the ball.

The big dogs on the line are the real bright spot. Most of the line plays both sides of the ball. They play the most difficult positions in Football, and play almost the entire game. The line play has not gone unnoticed. FCS powers like Montana, North Dakota and North Dakota State are following some Topper lineman. Even KSU head coach, Bill Snyder, took time from his busy day to wish the Topper line good luck against the Belen Eagles.

The D-Line played exceptional. Between the 20 yd lines, the line occupied Eagle blockers freeing up the LBs to make tackles. Unfortunately the LBs and DBs didn’t usually make the tackle until after the ball carrier attained a first down or 20 or more yds. On short yardage situations, the line stood tall and made plays.

Overall, despite the loss, the Topper line learned that they can hold their own against any team in AAAA if they play as a team. LA plays Albuquerque Academy this Friday. It is homecoming weekend. If LA can reduce the turnovers, it should be an easy win to celebrate Homecoming. 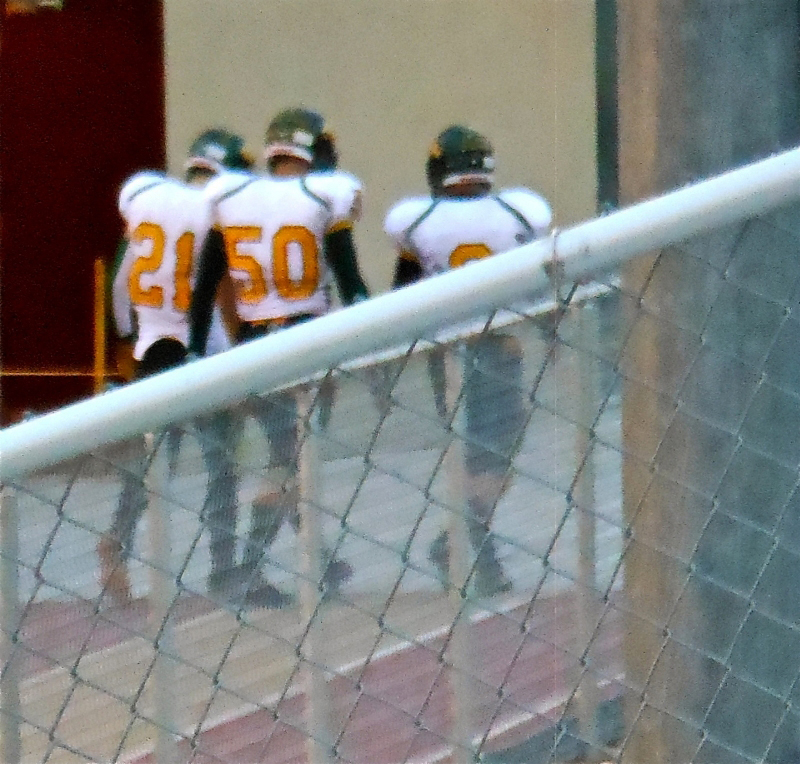 The three team captains discuss the first half of the game Friday night after the team has entered the locker room. Photo by Jim Owen/ladailypost.com 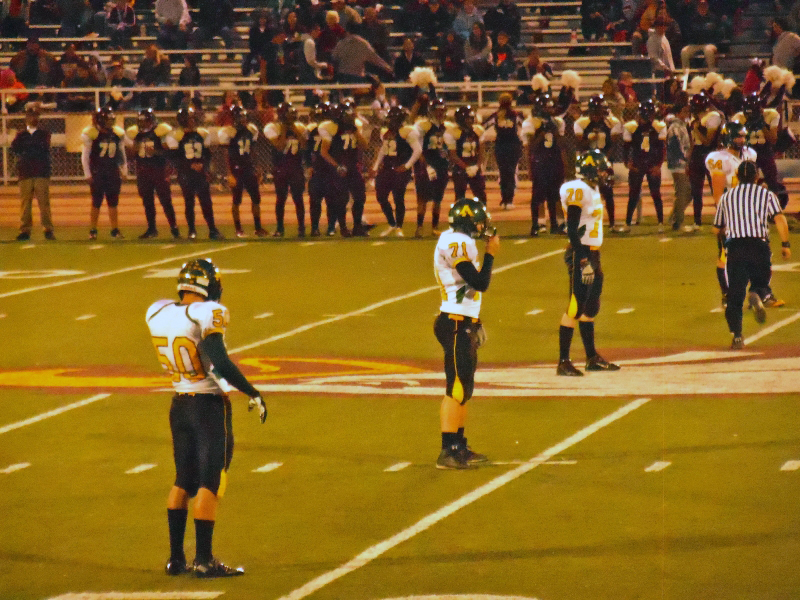 Toppers prepare to receive the kick off after a Belen touch down. Photo by Jim Owen/ladailypost.com