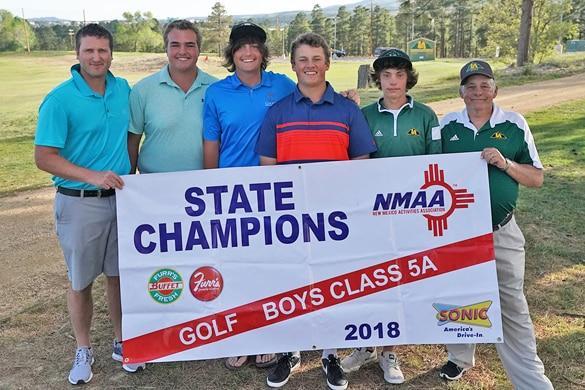 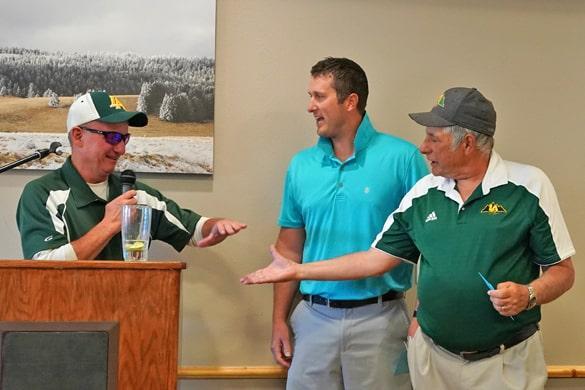 HOBBS – The Los Alamos Hilltopper boys golf team coasted to their first state championship in 12 years at the Rockwind Community Links Golf Course in Hobbs, winning by 25 strokes to take the 2018 title.

After the tournament, Head Coach Anders Ainsworth described the scene. “I knew as we were turning to the back nine that we had extended our lead from Monday. There were a couple really challenging holes early on the backside that I knew we had to get through. Once we got about halfway through the back side I knew we had a really solid chance of closing it out.”

“Watching the boys keep their composure down the stretch was the most impressive part of the tournament. This has been our goal for a few years now and watching them perform under pressure when it was all on the line made me a proud coach. We were confident. We kept our composure,” Ainsworth said about his team closing out the championship.

When asked how he felt watching his team clinch the championship, Ainsworth said about his team. “As the kids came off the 18th green one at a time I just wanted to give them a hug.”

The Hilltoppers were lead by Sophomore Henry Posten, who took second place overall at the state championships.  “What can I say about Henry? The kid played great on the biggest stage of the year,” Ainsworth said about his Sophomore leader. “Henry works so hard on his game and he understands how to play golf. The golf course and conditions were not easy. Henry really limited his mistakes and also made a ton of birdies. He had five birdies in the second round.”

Posten played at a championship level during the state tournament and could have won an individual title if not for St. Pius golfer Aiden Thomas, who shot an incredible five under for the tournament. “Henry really is one of the top players in all classifications in New Mexico, and the scary thing is he is only a sophomore. He has a lot of golf left with us. I heard many comments from parents and spectators from other teams watching Henry that he put on a ‘short game clinic,’” Ainsworth added. “Henry is just a really good player that is beginning to realize his potential. When Henry keeps the ball in play off the tee and putts well he is really hard to beat.”

“Placing second individually was an awesome accomplishment for Henry as he looks to push his game to the next level. He was so calm and confident from the time we arrived in Hobbs. I knew it was going to be a great tournament for the kid,” Ainsworth added.

Winning the state championship was the perfect ending for the lone Senior Sean Rau. “The state tournament will end our four-time team captain, Sean Rau’s, golf career at Los Alamos High. His leadership with the younger guys on the team must be recognized,” Ainsworth said about his senior. “He has been like an older brother to our large sophomore class. Sean has won multiple tournaments individually, he’s been an all-district performer, won the individual district championship in 2017, and won five consecutive team district championships. Sean will be playing golf at the collegiate level next year. I really don’t know where the program would be if we did not have Sean. He’s been our rock over the past five seasons. We’re really going to miss the kid.”

Reflecting on the very long high school golf season, Ainsworth was quick to talk about the improvements his team made from week to week.

“As we set out in August we knew we had a good team. Coming off last year’s second place finish at state was a confidence booster for our kids. After last year, we knew what it was going to take to win a championship in 2018,” Ainsworth said. “Our kids put in a major grind over the summer and improved. Our fall season went smoothly, almost too smoothly. As we entered the spring season we were hit with some adversity for the first time. I didn’t know how they would react. We struggled through the first few events of the spring before really hitting our stride in late April. It came together as we placed second at the Shootout in the Desert, won districts, and then played our best golf of the year at state.”

The Hilltoppers finished in second place twice during the season to Piedra Vista, who won the 6A title.

Saturday afternoon, members of the Los Alamos golf community came together at Cottonwood on the Greens for a celebration of the 2018 championship hosted by Kristy Ortega and Mike Lippiatt.

“When we were watching the scores come in, Kristy and I looked at each other and said, ‘If they win this, we’re doing something for them,’” Lippiatt said at the banquet.

Lippiatt also joked about his first impression of Coach Ainsworth before thanking him for taking over the boys’ team.

The team and coaching staff were introduced and had a chance to thank the community.

“We have so much support from the golf community in Los Alamos, well beyond the coaching staff and high school. Our kids are so fortunate to live in a place where people take golf seriously and recognize them for their efforts,” Ainsworth said about Los Alamos. “At all of our home events we have some of the largest crowds we see all year. The golf traditions that were established by former golf professionals and Head Coach Eddie Sanchez live on in Los Alamos. I can’t tell you how much this support and recognition from the Los Alamos golf community has improved our current team. It must be mentioned. I am super grateful to all those in Los Alamos that have helped us along the way.”

Ainsworth reflected on watching his team come off the course as champions.

“I knew they were exhausted. We practice and played for four straight days in Hobbs. They had done everything I had asked of them and more as we prepared for districts and state. We’ve put in so many hours over the past few years together. Having a moment for our kids to be recognized as the state’s best was super special,” Ainsworth said. “These guys get to say they are state champions forever. Not many people get to say that. I know it was a special moment for them. That ear-to-ear smile that they couldn’t wipe off their faces, it was also a special moment for assistant coach Daryl Osden. He does so much to support our program and kids. It was also special for the parents. I saw a few of them tearing up as well.” 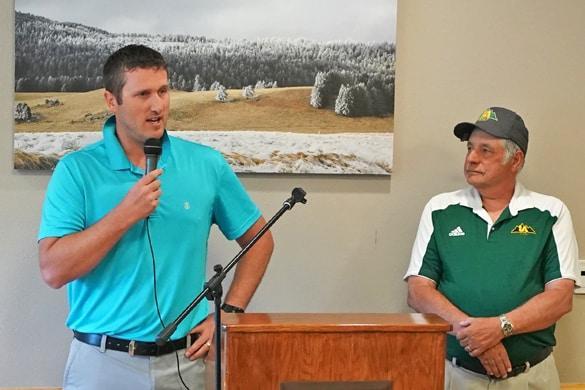