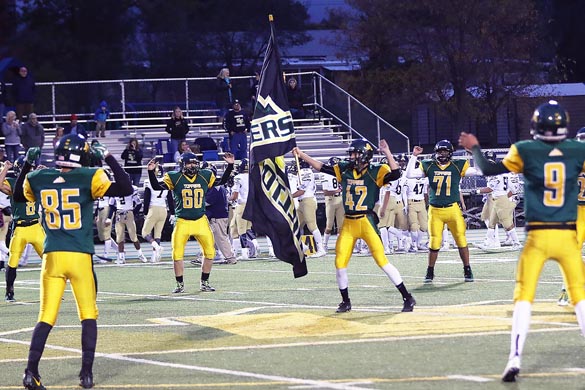 The Los Alamos Hilltopper Football Team takes to the field to play their homecoming game for 2017 against the Santa Fe Demons. The exciting game saw the lead change hands several times, but the ‘Toppers emerged victorious with a 21-14 win. Photo by John McHale/ladailypost.com 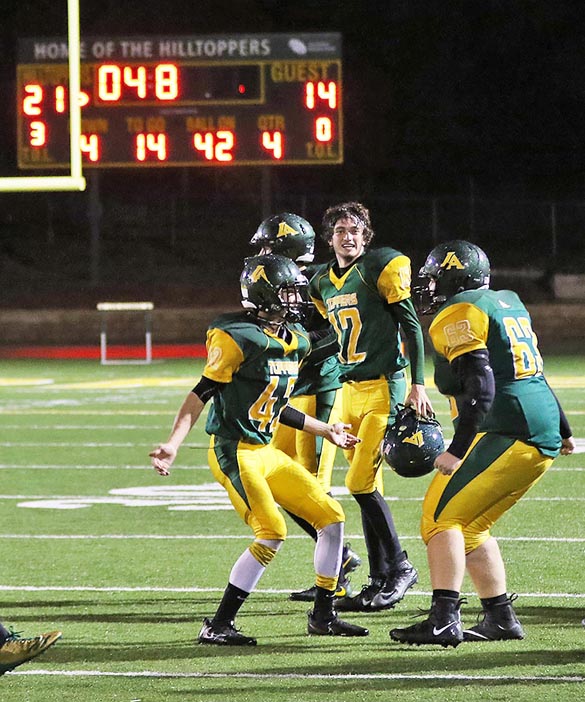 It wasn’t easy. It wasn’t pretty. But it was a huge win for the Los Alamos Hilltopper (4-2) Football team Friday night as they beat the Santa Fe Demons (0-6) 21-14 in front of the largest crowd of the season.

Coaches would call this a “trap game.” It was homecoming week, which meant alumni from every era would be rolling into town, a full week of distractions from the different activities at school, including looking for dates for the dance. And not to overlook, Santa Fe was coming into the game as a team desperate to win a game after losing 29 in a row.

The game started slow with both teams having unsuccessful fourth down conversions in their red zones to start the first quarter. Santa Fe had a stalled drive at the ‘Topper 18 yard line and would have a field goal attempt blocked to start the second quarter. That’s where the Los Alamos offense would pick up. On the next play, Cade Yost swept to the left for an 82-yard touchdown run to give the ‘Toppers a 7-0 lead. Yost would finish the game with three touchdowns on 147 yards.

With the help of a few ‘Topper errors and taking advantage of a tipped pass to extend a Demon drive, Santa Fe’s quarterback Zach Russell found the end zone on a keeper just a few minutes later to tie the score at 7.

After a quick three and out, the ‘Toppers were forced to punt the ball back to the Demons to close the first half. Santa Fe drove the ball all the way to the ‘Topper 8 yard line, but a holding call and an illegal man down field penalty would negate two touchdowns and give the Demons a fourth and forever try. Russell would end up throwing an interception in the end zone as time ran out.

Los Alamos kicked off to Santa Fe to start the third quarter, but the ‘Topper defense made a strong showing coming out of the extended break and forced the Demons to punt. The ‘Toppers specials teams came up with a blocked punt setting up a short field on the Demons side of the field. Jack Stewart would break free for a 35-yard rush to get Los Alamos inside the one. Yost cashed in the touchdown to give the ‘Toppers a 14-7 lead.

Santa Fe responded with a six-minute drive capped by a six-yard Marcos Acuna touchdown rush to close out the third quarter.

‘Topper quarterback Dylan Irish would take a huge hit on a run up the middle  early in the fourth quarter and have to check out of the game for a few snaps. Enter Kayden Rivera, who found Wyatt Saeger for a 71-yard pass play on a third and nine to get the packed homecoming crowd on their feet. Yost would again cash in the touchdown with a five yard run to put the ‘Toppers up 21-14.

After trading punts, Santa Fe had one last shot to tie the game with less than two minutes in the game and the ball on their own 28-yard line. Los Alamos helped the Demons march down the field with a few penalties, but would come up huge on a fourth down sack by Jack Steward and Dylan Irish to give Los Alamos the win.

“To have another homecoming win is always great,” Head Coach Garrett Williams acknowledged. “To fight through the distractions of the week, and us do our jobs and come out with [a win] is great. We didn’t play great on [offense] all the time, down a couple guys early. But our defense stepped up huge tonight.”

The defense held Santa Fe to multiple third or fourth and long plays all game and come up with stops in crucial moments.

“To see those guys come out and stop [Santa Fe] several times in the second half and get the ball back for us and then us have that last drive, go down and score and hold them again, it was awesome,” Williams said.

The win secures a 4-2 non-district record as the ‘Toppers prepare to welcome the Del Norte Knights to Sullivan Field Friday to kick off district play. 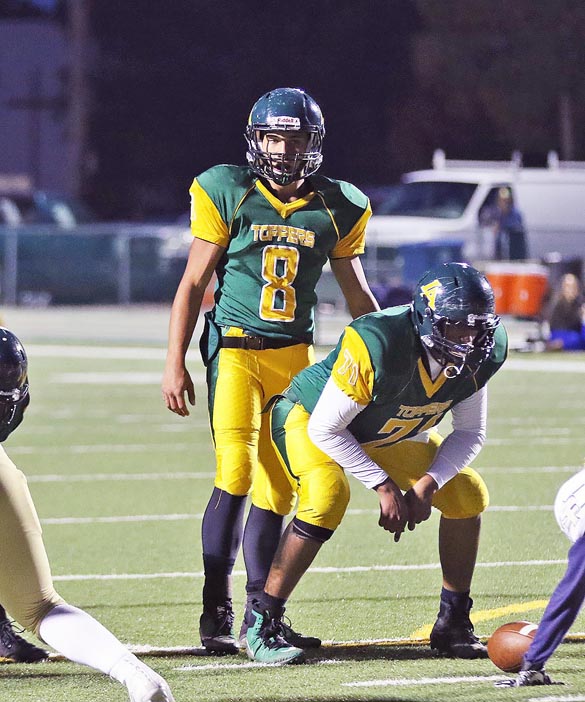 ‘Toppers quarterback Dylan Irish checks the defense before taking the snap in the first quarter. Photo by John McHale/ladailypost.com 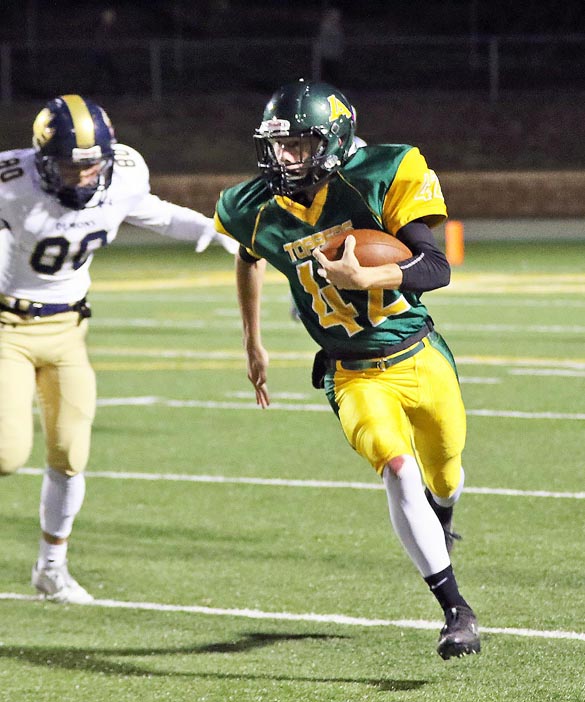 Cade Yost takes the ball for a 82-yard touch down ride. Photo by John McHale/ladailypost.com 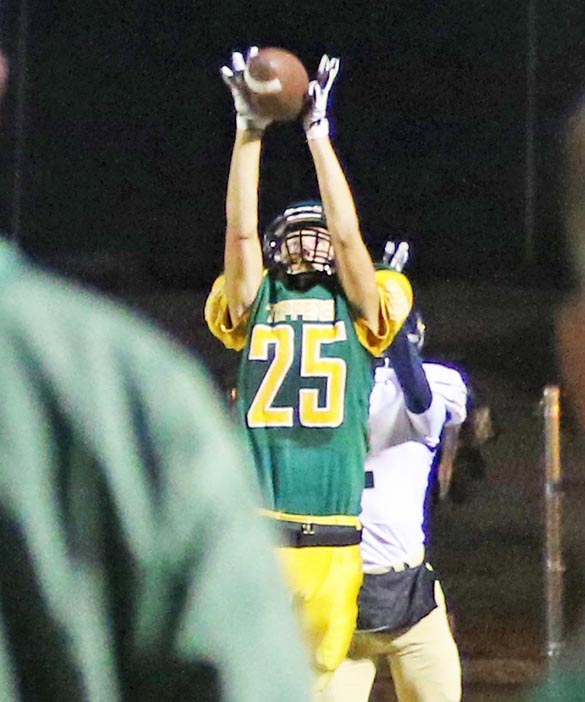 With the clock ticking down to end the first half, Wyatt  Seager goes high in front of the intended Demon receiver in the end zone to make the interception and stop the touchdown try. Photo by John McHale/ladailypost.com 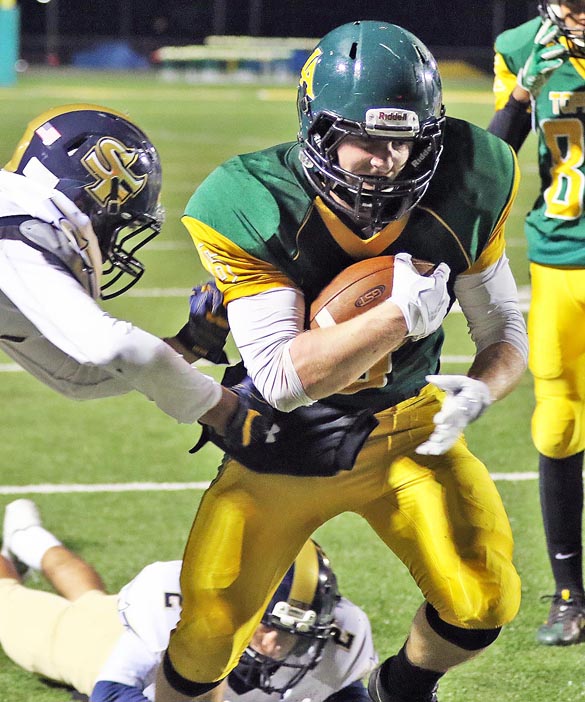 Jack Stewart breaks through the line and shrugs off tacklers to go 34 yards for a touch down in the second half. Photo by John McHale/ladailypost.com 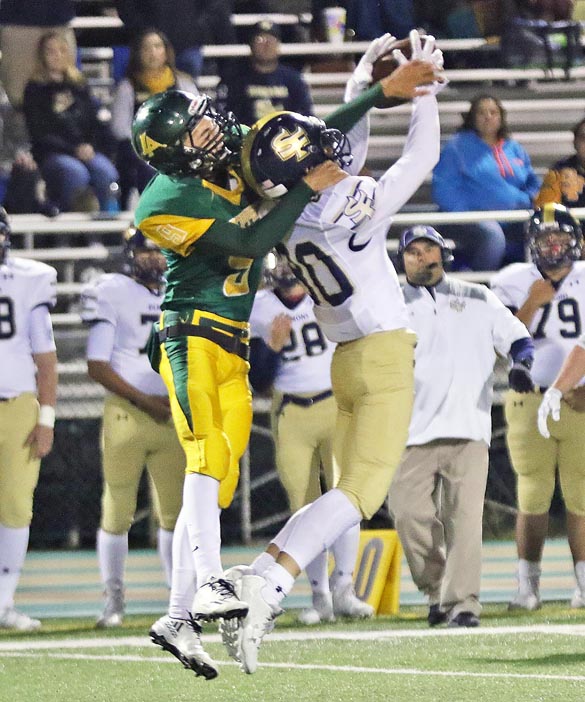 Kayden Rivera knocks the ball from the intended Demon receiver in the third quarter. 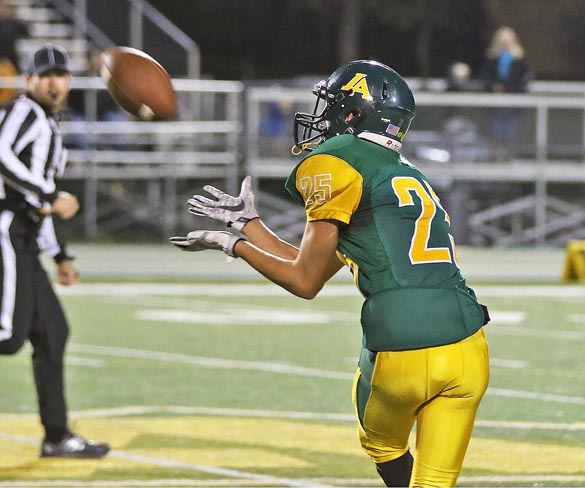 Wyatt Seager reaches for the perfectly thrown pass from quarterback Kayden Rivera and makes the catch and ran a 70-yard gain in the third quarter. Photo by John McHale/ladailypost.com