Topper Ladies Win One Lose One Against Sundevils 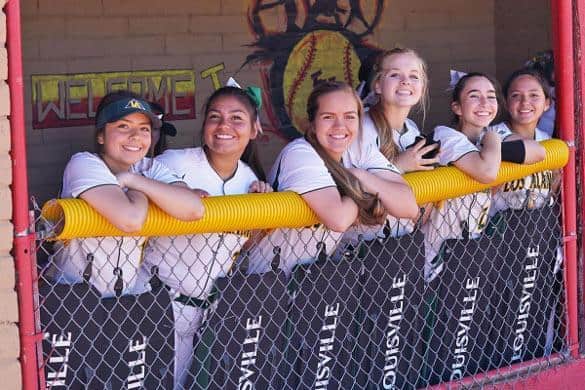 The Topper dugout poses for a photo before the start of a two game series against the Espanola Sundevils played Saturday at the softball field at Espanola High School. The first game was close all the way to the end with the Sundevils winning 7-6. The second game followed and the Toppers led the entire game winning 10-5. Photo by John McHale/ladailypost.com 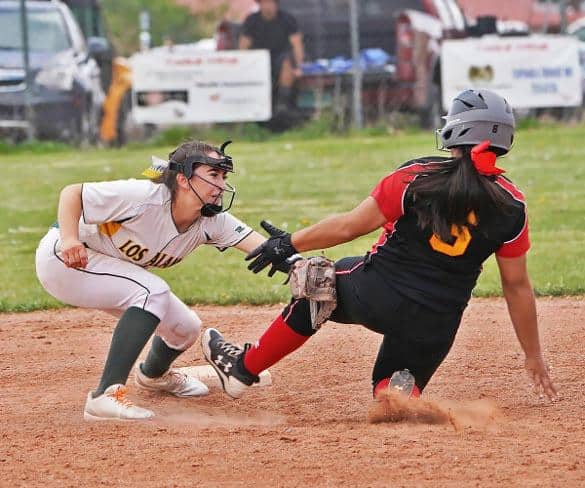 It appears that Aspen DeHerrera tags out Haley Ortega at second base in the 6th inning in the second game, but the umpire said DeHerrera bobbled the ball and called Ortega safe. Photo by John McHale/ladailypost.com

By GEORGE MORSE
Sports And Outdoors
Los Alamos Daily Post
The Los Alamos High School softball team came back from a tough 7-6 loss in the opening game of a doubleheader April 27 against rival Espanola Valley High School and won the second game 10-5 to put the Hilltoppers solidly in second place in District 2-4A.
Los Alamos freshman Isabella “Bella” Robertson picked up the win with a solid performance on the mound, shutting out the Sundevils for the first three innings as Los Alamos built an 8-0 lead. Espanola pushed a run across the plate in the bottom of the fourth inning and tried to rally in the final three innings. The Sundevils could never put enough hits together to sustain a comeback.
“She (Robertson) has been pitching mostly junior varsity,” Los Alamos Coach Robbie Harris said. “We wanted to get her as much work as she could so we can get a good look at her. She did a fantastic job.”
Los Alamos had just seven hits in the first game. The Hilltoppers had 13 hits in the second game.
“In that first game, we weren’t hitting the ball like we should,” Coach Harris said.
The Hilltoppers took an early 1-0 lead in the top of the first inning. Alicia Gonzales was safe on an error leading off the inning and scored on a single by Savana Luster. The Hilltoppers added two more runs in the second inning. Two singles and a great bunt by Janessa Gonzales loaded the basses. Two runs scored on a hit by Katie Wimer, but Janessa Gonzales was thrown out at third.
Los Alamos added two more runs in the third inning on two errors that allowed Luster and Maya McMillan to reach base, including a routine pop fly that Espanola second baseman Sydnee Pollard lost in the sun and the ball ended up hitting her in the head. They scored on a base hit by Aspen DeHerrera. Three more runs crossed the plate for the Hilltoppers in the top of the fourth inning. Espanola pitcher Autumn Vigil hit Los Alamos’ Claire Bluhm with a pitch and walked Wimer. Megan Romero singled and Vigil hit another batter, Dailynn Rodriguez, with a pitch. Singles by Halle Warwick and DeHerrera brought two more runs home and the Hilltoppers led 8-0 in the fourth inning.
Espanola managed a run in the bottom of the fourth inning. Los Alamos added two runs in the fifth inning on two walks, an error and a single by Luster to take a 10-1 lead.
Espanola pitcher Hailey Guinn, who came in to relieve Vigil, shut out the Hilltoppers over the final two innings as Guinn’s slower pitches threw Los Alamos’ batters off.
“With a slower pitcher, the ball looks as big as a melon,” Coach Harris said. “You have to be patient.”
Espanola came up with two runs in the sixth inning to make the score 10-3 going into the seventh inning. In their final at bats, the Sundevils got two runs on a double by Ashley Osegueda. Espanola had runners at first base and third base with two outs. Second baseman McMillan made a nice grab of Taylor Suazo’s soft line drive to end the game.
Los Alamos is 6-3 in District 2-4A and has three games left in district competition. The Hilltoppers host Taos High School Tuesday. The Tigers swept a doubleheader against Los Alamos April 13 in Taos for two of the Hilltoppers’ district losses.
Los Alamos finishes the regular season with a doubleheader against Pojoaque Valley High School Saturday. The Elkettes lead the district with a 7-2 record.
“We have to win the rest of our games,” Coach Harris said. 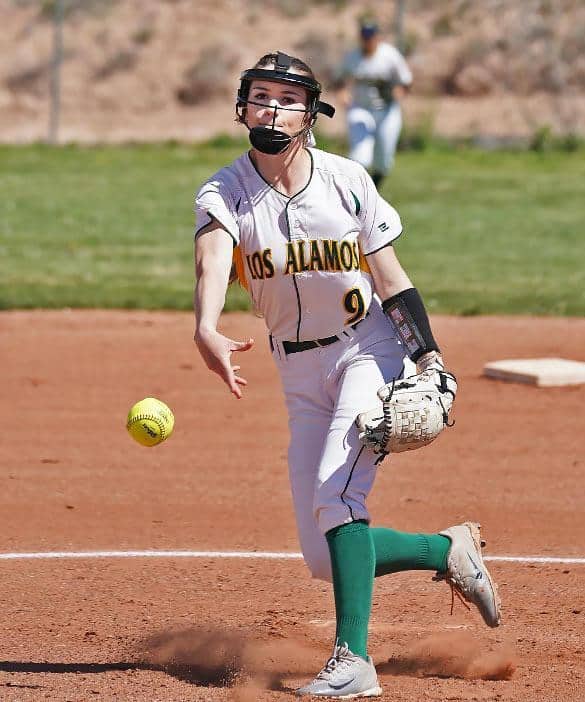 Savana Luster was the lead off pitcher and pitched six innings. Katie Wimer came in to finish the game. In the second game, Isabella Robertson made her varsity debut and pitched a complete game and was credited with the win. Photo by John McHale/ladailypost.com 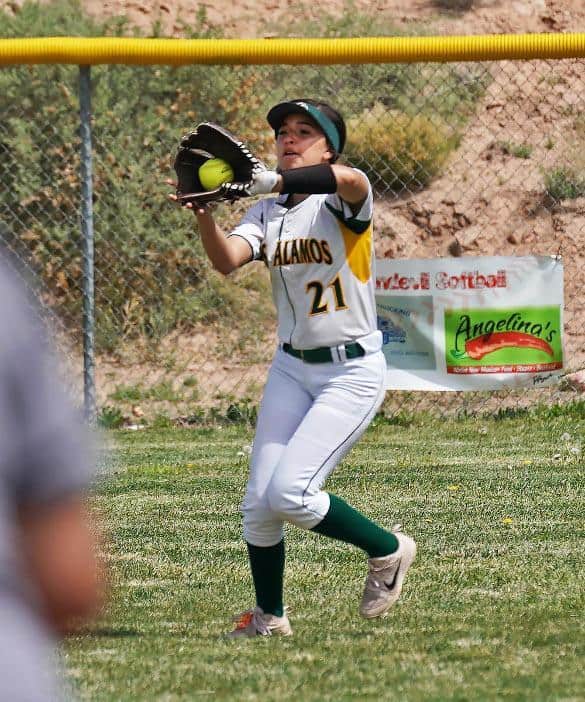 Halle Warwick makes an on-the-run catch in right field for the 3rd out in the 2nd inning. Photo by John McHale/ladailypost.com 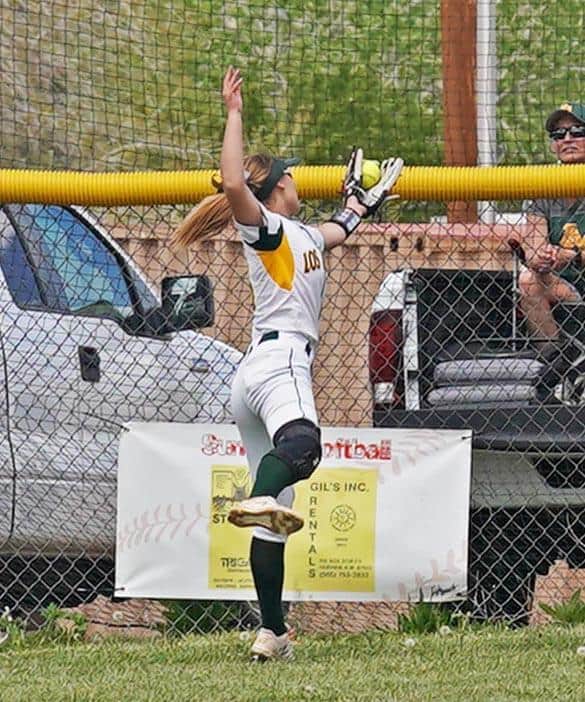 Katie Wimer makes a great catch at the fence for the 3rd out in the 5th inning. Photo by John McHale/ladailypost.com

Megan Romero had a very busy day, she was credited with eight catches for outs in both games. Here she catches a foul ball for the 2nd out in the 5th inning of the second game. Photo by John McHale/ladailypost.com

Maya McMillian, playing first base goes to the fence and stretches big to make the catch for the first out in the 7th inning in the second game. Photo by John McHale/ladailypost.com

Claire Bluhm hit the only home run of both games in the 6th inning of the first game. Photo by John McHale/ladailypost.com