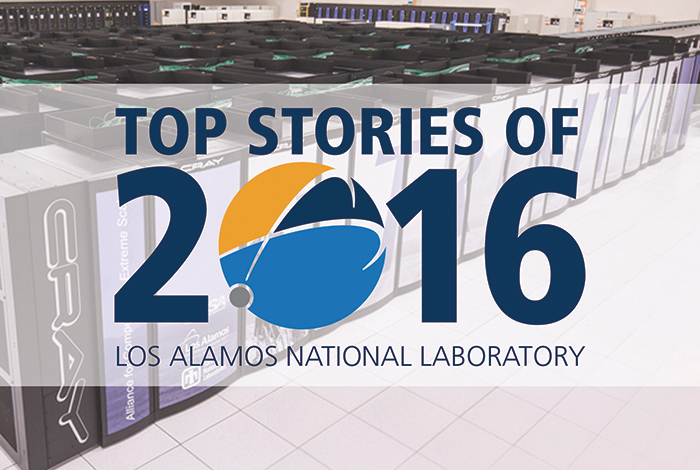 From discoveries on Mars to breakthroughs in cancer and solar cell research, as well as shedding new light on the nature of plutonium, Los Alamos National Laboratory’s 2016 accomplishments highlighted the Lab’s unique capabilities for carrying out its essential national security mission in a broad range of disciplines. Innovations in supercomputing data storage, the use of medical isotopes for cancer treatment, a tissue-engineered artificial lung, and other new technologies rounded out the Lab’s year.

Here is a look at some of the year’s news and programmatic highlights, with links, where applicable, to a representative item of related coverage:

ChemCam findings hint at oxygen-rich past on Mars

The discovery of manganese oxides in Martian rocks might tell us that the Red Planet was once more Earth-like than previously believed. This hint of more oxygen in Mars’ early atmosphere adds to other Curiosity findings—such as evidence of ancient lakes—revealing how Earth-like our neighboring planet once was. “The only ways on Earth that we know how to make these manganese materials involve atmospheric oxygen or microbes,” said Nina Lanza, a planetary scientist at Los Alamos National Laboratory. “Now we’re seeing manganese-oxides on Mars and wondering how the heck these could have formed.”

First detection of boron on the surface of Mars

Boron has been identified for the first time on the surface of Mars, indicating the potential for long-term habitable groundwater in the ancient past. Curiosity is climbing a layered Martian mountain and finding rock-composition evidence of how ancient lakes and wet underground environments changed, billions of years ago, in ways that affected their favorability for microbial life.

Opinion: Are tiny satellites the future?
Today, about 570 of the roughly 1,400 operational satellites orbiting Earth belong to the U.S. They provide capabilities to communicate, collect information and support national security. These satellites provide a critical edge for America’s private industry and its military. But this dominance is fading fast. Global Security leader Terry Wallace shares his thoughts.

Since scientists first began forming a picture of the Van Allen Belts in the 1950s, the understanding of their shape has largely remained unchanged—a small, inner belt, a largely empty space known as the slot region, and then the outer belt, which is dominated by electrons and is larger and more dynamic than the others. But new analysis revealed that the shape varies from a single, continuous belt with no slot region, to a larger inner belt with a smaller outer belt, to no inner belt at all. Many of the differences are accounted for by considering electrons at different energy levels separately.

See coverage in the Daily Mail

Medical isotopes have long been a product of the Los Alamos specialty facilities, which create strontium-82, germanium-68 and other short-lived isotopes for medical scans. Taking advantage of the unique multidisciplinary capabilities of the Laboratory, researchers use the linear particle accelerator at the Los Alamos Neutron Science Center to provide rare and important isotopes to the medical community across the United States. The expansion into actinium exploration moves the research forward toward treatment isotopes, as opposed to only diagnostic materials.

PuLMo is a miniature, tissue-engineered artificial lung that mimics the response of the human lung to drugs, toxins and other agents. It may also be designed to mimic lung disease conditions, such as Chronic Obstructive Pulmonary Disease (COPD) and asthma, and may be used to study lung air-flow dynamics to better understand the mechanisms of toxins and drug delivery and the effects of smoking, particularly the less-understood effects of e-cigarettes.

Scientists have a new tool for unraveling the mysteries of how diseases such as HIV move through a population, thanks to insights into phylogenetics, the creation of an organism’s genetic tree and evolutionary relationships. Like a detective inferring the existence of an unseen actor in a sequence of events, the Los Alamos team used computational phylogenetic analysis to examine how strains of HIV, both in computer modeling and compared with real-life case studies, would be transmitted.

In a step that could bring perovskite crystals closer to use in the burgeoning solar power industry, researchers have tweaked their crystal production method and developed a new type of two-dimensional layered perovskite with outstanding stability and more than triple the material’s previous power-conversion efficiency.

A study found both the cause and a solution for the pesky tendency of perovskite solar cells to degrade in sunlight, a research breakthrough potentially removing one roadblock to commercialization for this promising technology. In a key finding, researchers found those degraded devices exhibit self-healing powers when given a little time in the dark. The team determined that photo-degradation in perovskite cells is a purely electronic process due to charge accumulation without chemical damage to the crystal structure and therefore can be reduced, while the cells’ self-healing properties allow them to rebound in the dark.

The triggering of small, deep earthquakes along California’s San Andreas Fault reveals depth-dependent frictional behavior that may provide insight into patterns signaling when a major quake could be on the horizon. The study reports that the deepest part of California’s 800-mile-long San Andreas Fault is weaker than expected and generates small earthquakes in response to tidal forces.

A new study has found that plants regulate their leaf temperature with some independence from the surrounding air temperature, a trait that increases carbon uptake through photosynthesis. The research offers promise for refining Earth system models that help predict climate change impacts and feedbacks.

A moment of inspiration during a wiring diagram review saved more than $2 million in material and labor costs for the Trinity supercomputer. The Laboratory’s High Performance Computing facilities team, led by Data Center Manager Ron Velarde of HPC-Design, discovered the potential to re-engineer Cray’s initial wiring diagram for the power feed to Trinity’s computing racks.