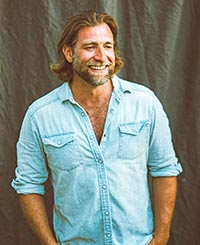 The last time Tony Kamel was in Los Alamos he was leading his Grammy-nominated band, Wood and Wire, through two scorching sets of bluegrass music in front of a packed audience in Fuller Lodge.

That show sold out a week before the band came to town and surprised Jonathan Lathrop, Executive Director of Live in Los Alamos.

“The band had never been in this neck of the woods before, and I had no idea that bluegrass had such a cross-generational appeal,” Lathrop said. He is confident that Kamel will draw another sold-out crowd as he tours in support of his recently released solo debut. “Tony promises that the show will be much more than ‘a dude with a guitar and some songs,’ and his band won over so many fans last time that I’m sure people are going to welcome his return.”

While Live in Los Alamos usually refrains from producing shows during the summer months, opting not to compete with a free concert series and working to build a fall line-up, there are a number of artists who have earned the right to a Los Alamos audience any time they come through New Mexico.

“Tony is one of those who understood right away how cool Fuller Lodge and our quirky little community is. He loved the welcome he and the band were given and how much their music was appreciated,” Lathrop said. “Anyone who recognizes, without prompting, what Ted (Galvez, Live in Los Alamos Sound and Technical Director) and I wanted to create and how great our community is, will be welcomed back any day of any season.”

Kamel will play at 7 p.m. at the historic Fuller Lodge Thursday, Aug. 18.

Doors will open at 6 p.m. for beer and wine service from Bathtub Row Brewing Co-op, and a dinner will be offered. While the dinner service provider was not available at press time, it will soon be posted at liveinlosalamos.com, the same site that allows ticket purchases on-line for $23.50.

Those wanting to avoid the online fee can purchase tickets (cash or check only) at the Los Alamos Schools Credit Union for $20.

If still available, tickets will be $28 at the door.