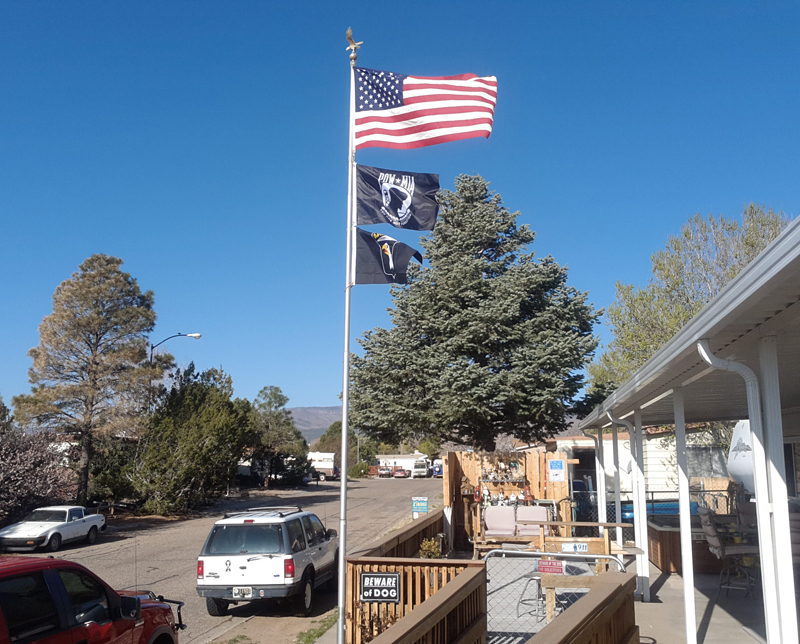 Today is ‘Welcome Home Vietnam Veterans Day’ and to all the Vietnam veterans living in Los Alamos – thank you and welcome home. Flags flying at North Mesa home in honor of Vietnam veterans. Photo by SFC Jim Douglass USA RET

Recognized as a day of commemoration, reflection and respect to veterans who sacrificed so much during the Vietnam War. This is a good day to visit the local American Legion and VFW posts and say – welcome home and thank you for your service.

Over 9 million military personnel served during the Vietnam War. Of that number, 58,156 lost their lives, while 303,704 were wounded in action.

Instead of receiving a welcome fitting for the sacrifice they made for this country, the majority of the returning troops were met with criticism and hostility.

These words could describe the possible feelings and thoughts that went through the minds of these individuals.

Some of these men were drafted, yet still fought and died for the lives of the men to their right and to their left, only to be diminished for their accomplishments upon their return.

Politics played a key role in the lack of respect that was due to these individuals. Back then those who were against the war did not support the troops like many do today.

Now, government is taking an opportunity to return that respect to the troops.

The resolution currently awaits a decision by the House. This day will be recognized across the US as a day of commemoration, a day to pay the proper respect to the veterans who sacrificed so much during the war.

Vietnam Veterans Day is a chance to repair the wrong done to these troops. The people of the United States can finally pay the respect due them.

Many cities and states have events planned for these veterans. Marines from Marine Corps Logistics Base in Barstow, California, have planned a ceremony honoring the Vietnam troops, followed by a parade through Fort Irwin.

We should all take this day to give our appreciation to our Vietnam veterans. Taking time out from our busy lives to give thanks for the sacrifices of those who we don’t know is a display of kindness and admiration that means so much to those who expect so little.

Thank you all for what you have done. Semper Fidelis.