Today Is Veterans Day – Honoring People Who Have Served In U.S. Armed Forces 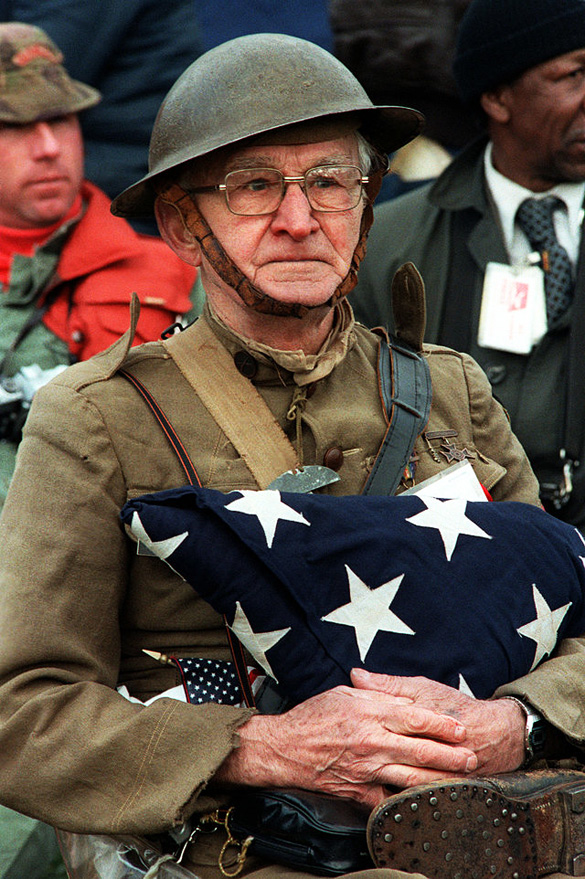 Joseph Ambrose, an 86-year-old World War I veteran, attends the dedication day parade for the Vietnam Veterans Memorial in 1982, holding the flag that covered the casket of his son, who was killed in the Korean War. Courtesy/wikipedia.com

Today is Veterans Day, an official United States holiday that honors people who have served in the U.S. Armed Forces. It is a federal holiday observed Nov. 11.

It coincides with other holidays such as Armistice Day and Remembrance Day, which are celebrated in other parts of the world and also mark the anniversary of the end of World War I (major hostilities of World War I were formally ended at the 11th hour of the 11th day of the 11th month of 1918, when the Armistice with Germany went into effect). The United States also originally observed Armistice Day; it then evolved into the current Veterans Day holiday in 1954.

Veterans Day is not to be confused with Memorial Day; Veterans Day celebrates the service of all U.S. military veterans, while Memorial Day is a day of remembering the men and women who died while serving.

World War I – known at the time as “The Great War” – officially ended when the Treaty of Versailles was signed on June 28, 1919, in the Palace of Versailles outside the town of Versailles, France. However, fighting ceased seven months earlier when an armistice, or temporary cessation of hostilities, between the Allied nations and Germany went into effect on the eleventh hour of the eleventh day of the eleventh month. For that reason, November 11, 1918, is generally regarded as the end of “the war to end all wars.” 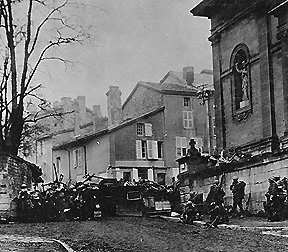 Soldiers of the 353rd Infantry near a church at Stenay, Meuse in France, wait for the end of hostilities. This photo was taken at 10:58 a.m., Nov. 11, 1918, two minutes before the armistice ending World War I went into effect. Courtesy/www.va.gov

In November 1919, President Wilson proclaimed Nov. 11 as the first commemoration of Armistice Day with the following words: “To us in America, the reflections of Armistice Day will be filled with solemn pride in the heroism of those who died in the country’s service and with gratitude for the victory, both because of the thing from which it has freed us and because of the opportunity it has given America to show her sympathy with peace and justice in the councils of the nations…”

The original concept for the celebration was for a day observed beginning at 11 a.m. with parades and public meetings and a brief suspension of business

The United States Congress officially recognized the end of World War I when it passed a concurrent resolution on June 4, 1926, with these words:

Whereas the 11th of November 1918, marked the cessation of the most destructive, sanguinary, and far reaching war in human annals and the resumption by the people of the United States of peaceful relations with other nations, which we hope may never again be severed, and

Whereas it is fitting that the recurring anniversary of this date should be commemorated with thanksgiving and prayer and exercises designed to perpetuate peace through good will and mutual understanding between nations; and

Whereas the legislatures of twenty-seven of our States have already declared Nov. 11 to be a legal holiday: Therefore be it Resolved by the Senate (the House of Representatives concurring), that the President of the United States is requested to issue a proclamation calling upon the officials to display the flag of the United States on all Government buildings on Nov. 11 and inviting the people of the United States to observe the day in schools and churches, or other suitable places, with appropriate ceremonies of friendly relations with all other peoples.

An Act (52 Stat. 351; 5 U. S. Code, Sec. 87a) approved May 13, 1938, made the 11th of November in each year a legal holiday—a day to be dedicated to the cause of world peace and to be thereafter celebrated and known as “Armistice Day.” Armistice Day was primarily a day set aside to honor veterans of World War I, but in 1954, after World War II had required the greatest mobilization of soldiers, sailors, Marines and airmen in the Nation’s history; after American forces had fought aggression in Korea, the 83rd Congress, at the urging of the veterans service organizations, amended the Act of 1938 by striking out the word “Armistice” and inserting in its place the word “Veterans.” With the approval of this legislation (Public Law 380) on June 1, 1954, Nov. 11 became a day to honor American veterans of all wars.

Later that same year, on October 8th, President Dwight D. Eisenhower issued the first “Veterans Day Proclamation” which stated: “In order to insure proper and widespread observance of this anniversary, all veterans, all veterans’ organizations, and the entire citizenry will wish to join hands in the common purpose. Toward this end, I am designating the Administrator of Veterans’ Affairs as Chairman of a Veterans Day National Committee, which shall include such other persons as the Chairman may select, and which will coordinate at the national level necessary planning for the observance. I am also requesting the heads of all departments and agencies of the Executive branch of the Government to assist the National Committee in every way possible.”