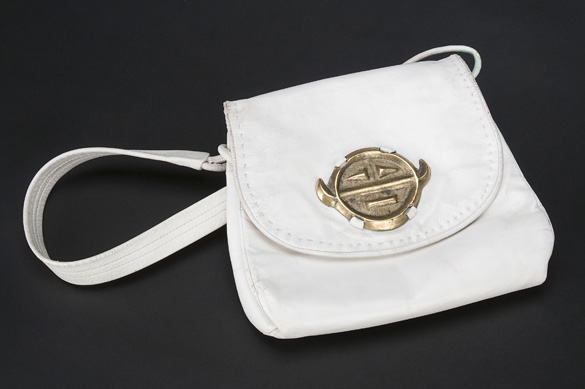 Woman’s purse. Courtesy/NMMA
NMMA News:
SANTA FE ― This year is the centennial of the birth of seminal Native American artist Lloyd Kiva New, and three Santa Fe arts institutions are celebrating this anniversary in style.
Lloyd Kiva New, a Cherokee, is known locally as the Institute of American Indian Art’s (IAIA) first artistic director, yet nationally, Native people refer to him as the “Godfather of Native Fashion.”
The Museum of Indian Arts and Culture, the IAIA Museum of Contemporary Native Arts, and the New Mexico Museum of Art will each present an exhibition in 2016 focusing on key aspects of Lloyd Kiva New’s (b. 1016 – d. 2002) significant contributions to comtemporary Native Culture.
Additionally, the three institutions are planning a symposium, multiple lectures, panel discussions, fashion show, gala and as pure celebration, a 100th birthday party.
Opeing first is the IAIA Museum of Contemporary Native Art’s Lloyd Kiva New: Art, Design, and Influence which draws on three major themes of his legacy, each tied to his innovative concepts in Native art and culturally-based education.
Lloyd Kiva New: Art includes paintings by New from his personal collection, completed between 1938-1995, many never before shown in a museum or in a gallery.
Lloyd Kiva New: Design presents the artist as an innovator of Native Modernism through fashion and textile design in an interpretive reproduction of the Kiva Studio – New’s successful 1950s showroom in Scottsdale, Arizona.
Lloyd Kiva New: Influence features over forty printed textiles created by IAIA students during the 1960s and 1970s under New’s artistic direction – drawn from the permanent collection of the IAIA Museum of Contemporary Native Arts.
Additionally, patrons will be able to “create” their own designs based on New’s work, though an interactive display created by New Mexico’s leader in interactives, Ideum.
Lloyd Kiva New: Art, Design, and Influence hopes to illuminate Lloyd Kiva New’s artistic abilities, his successful fashion career, and profound impact on contemporary Native art.
A “soft” opening for the exhibition is scheduled for Jan. 22, and will run through July 31 – although Lloyd Kiva New: Art will remain open until Sept. 1. The official opening of the exhibit and reception is Feb. 18, on the occasion of the 100th anniversary of New’s birth. Aysen New will co-host the “birthday party” at the museum.
Museum of Indian Arts and Culture’s career retrospective A New Century: The Life and Legacy of Cherokee Artist and Educator Lloyd “Kiva” New (Feb. 14 through Dec. 30). A New Century is a mesmerizing look into New’s storied life from his humble beginnings on the family farm in Oklahoma to the burgeoning days in IAIA. In between he strides the decks of the USS Sanborn during World War II and the halls of the Art Institute of Chicago.
Opening successive and successful boutiques and craft centers in the gleaming post-war enclave of Scottsdale, Arizona. New was a pioneer in the worlds of fashion, entrepreneurship, and Native art instruction. His vision of cultural studies and creative arts education continues to influence and inspire. Through personal recollections, photos, archival documents, and objects pour la couture, New Century: The Life and Legacy of Cherokee Artist and Educator Lloyd “Kiva” New reviews the life of this American Indian visionary.
The New Mexico Museum of Art’s exhibit Finding a Contemporary Voice: The Legacy of Lloyd Kiva New and IAIA (May 20 through Oct. 10) showcases artwork by former and present IAIA faculty and alumni demonstrating the contribution these artists have made to the larger field of contemporary art.
Taking a Fritz Scholder group portrait of IAIA faculty and the legacy of the institution’s first Art Director Lloyd Kiva New as starting points, this exhibition includes work by IAIA faculty and alumni from the 1960s to the present, such as Scholder, Neil Parsons, T.C. Cannon, Melanie Yazzie, Hulleah Tsinhnahjinnie, and Will Wilson.
In his teaching, New encouraged looking at innovative techniques and forms as a path to creating contemporary Indian art. Looking at the issues of identity still being raised in contemporary Native American art, it is clear that the artwork of the 1960s and 70s began a conversation that continues to this day.
Additionally, IAIA and MIAC will jointly present a symposium, “The Lloyd Kiva New Centennial Convocation” in October of 2016.
The convocation will be an interdisciplinary look at the contemporary Native art movement. Other activities planned include fashion shows, panel discussions, lectures, a Veteran’s Day event, and additional special programming in conjunction with Indian Market in August.
IAIA will also offer a class “Lloyd Kiva New and the Contemporary Native Art Movement” in the Spring 2016 semester, taught by IAIA archivist Ryan Flahive and various guest lecturers. The curriculum will cover a broad range of New’s life and teachings, including sections such as, “The Indian New Deal and The Indian Arts and Crafts Board,” ― “Kiowa Five/The Studio,” ― The Scottsdale, AZ Years,” ― “The Rockefeller Conference and The Southwest Indian Art Project,” and “IAIA 1960-1967.”
Menu
Los Alamos
39°
Partly Cloudy
7:03am4:51pm MST
Feels like: 37°F
Wind: 5mph W
Humidity: 48%
Pressure: 30.07"Hg
UV index: 0
WedThuFri
50/32°F
48/34°F
39/12°F
Weather forecast Los Alamos, New Mexico ▸