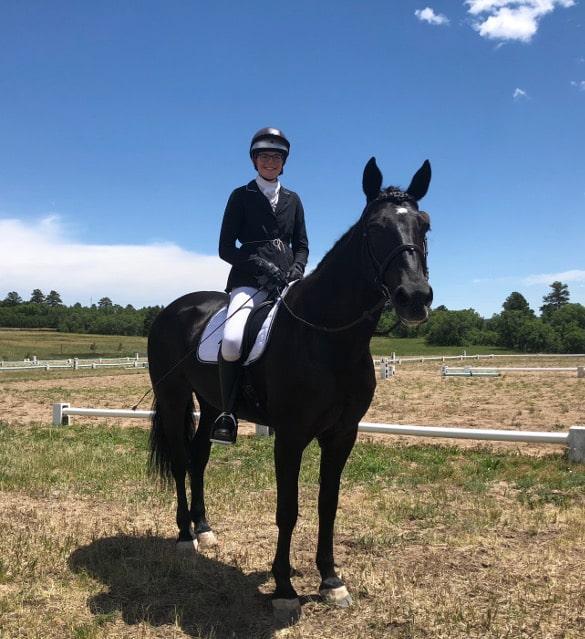 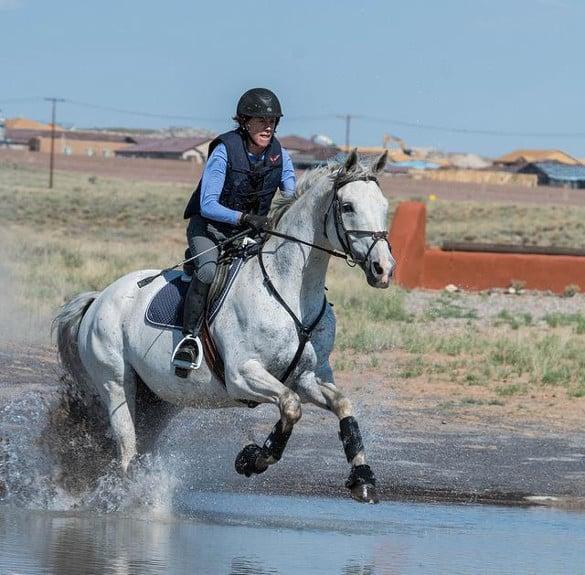 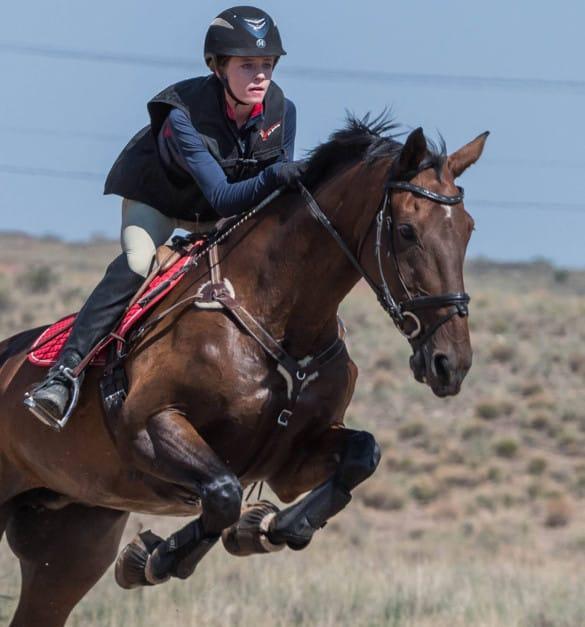 Ashley Smith on Oaxaca. Courtesy photo
COMMUNITY News:
Three Los Alamos horsewomen have qualified to compete at the United States Eventing Association’s 2018 American Eventing Championships. Riders Haylee Hayden, Ashley Smith and Laura Worl Kober departing last week to compete at the Colorado Horse Park in Parker, Color.
Eventing is best described as an equestrian triathlon. The sport originated as a cavalry test and is involves three phases: dressage, cross-country and show jumping. The first phase – dressage – shows the graceful partnership of horse and rider through a sequence of required movements on the flat. The next phase -cross-country – challenges the pair’s courage, fitness and determination as they jump a series of solid obstacles and navigate varied terrain at speed. In the final phase – show jumping – pairs must again prove their precision as they clear a course of fences whose poles fall down at the lightest tap, requiring great care to complete. Competitors accumulate penalty points in each phase, and at the end of the event, the pair with the lowest score takes home top honors.
Held over one, two or three days, eventing is one of the few Olympic sports where men and women compete alongside one another as equals.
Haylee Hayden is a senior at Los Alamos High School and has been riding since 6th grade. She has been an active member of Los Alamos Pony Club, a United States Pony Clubs, Inc. organization, for five years. This is her first time at the eventing championships, and she will be riding a Friesian/Quarter Horse crossbred mare named Izzy, registered as Lady Black Hawk. Hayden spends an average of 30 hours a week with her horse, who she’s been riding for about 18 months. The mare, in fact, has a great deal more experience than Hayden does, having competed at the championships twice previously. Haylee is the daughter of Donna Hayden and Joe Richardson.
Ashley Smith, 13, has been riding for the past four years. Her interests include Los Alamos Pony Club, English riding, dressage, show jumping and her favorite is riding fast on the cross country jumping phase. She will be competing on Oaxaca, an 18-year-old Holsteiner mare. Ashley is the daughter of Pamela and Andrew Smith.
Laura Worl Kober, a nuclear chemist at Los Alamos National Laboratory, is an experienced competitor in both dressage and eventing. She will be riding Simon, show name Sterling Impression, a Rheinlander gelding that she has trained since she bought him as a baby in 2008. The pair received the 2017 Area 10 Adult Eventing Championship year end award, and also competed successfully in dressage recently completing a Bronze certificate. Simon especially loves peppermints and watermelon for treats. She is married to Ed Kober and the mother of three: Megan, Erin and Derek.
All three riders train with professional instructor Kathleen Russell, who teaches throughout Northern New Mexico.
Menu
Los Alamos
34°
Fair
7:14am5:16pm MST
Feels like: 34°F
Wind: 0mph SW
Humidity: 27%
Pressure: 30.19"Hg
UV index: 0
SatSunMon
46/27°F
45/28°F
41/27°F
Weather forecast Los Alamos, New Mexico ▸