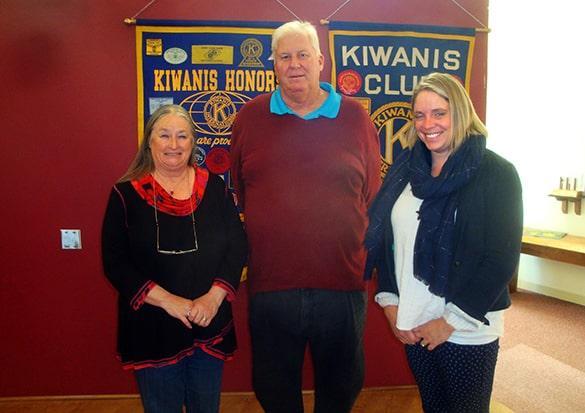 Three of the four judge candidates in Los Alamos County participated in an election forum Oct. 9 at the weekly Kiwanis meeting.

Jim Rickman, a Libertarian running for Magistrate Judge, was invited to the forum but was out of town at the time it was held.

Candidates were asked two questions, provided to them in advance:

Each candidate was given a total of four minutes to answer the questions.

In response to Question 1, Casados said that she would like to see further standardization of the approach among the 67 magistrates in the state. She would like to see them using the same forms, and she wishes they would all “try to deal with everything in the same way.”

She would also like to see improved education for all new judges. She noted that after the last election, there were 30 new judges taking office. “Many had never been in a courthouse.” In an effort to prepare them for their new jobs, a two-week training session was held in Albuquerque, and Casados was one of the facilitators. She is convinced that it is vital that all new magistrates know how and where they can find answers to their questions.

What would she like to change? She noted that if she is re-elected, during her next term in office, “District judges will oversee the administrative part of my court.” She said she is not sure that she likes this idea—a project of the State Supreme Court—but she will watch and see if it really works.

“I’ve been your judge for 16 years,” she said, “but I still learn something new every day.”

“I have a passion for this court,” she added. She noted that she reared her children here, and, “I’m going to stay.”

Allen, a lawyer, said she started her career in “special education law,” moved on to work as a prosecutor; then went into defense law, and, at one time, specialized in “children in the court system.”

She provided a single answer to address both questions.

She said the first thing she would do if elected would be to “sit down and listen” to all employees of the court. (She said she did this when she was running the Teen Court.) She would like to “see what everyone does and look for any inefficiencies.”

She would also like to establish a system that would tap into and use the social services available in Los Alamos County instead of having the court invent something new.

And, commenting on the judicial system in relation to young people in the community, she said she has found that usually when a young person is in court, “there’s an underlying reason.”

She said, “You’re not going to change their behavior by punishing them.”

In Teen Court, she said, she watched closely to see what worked, and she found that, “You must address their needs.”

Kirk stressed his many years of experience in Los Alamos. He has lived in the community for 60 years. He is currently serving his 20th year as Municipal Judge; he worked for many years before that as a police officer and the police chief in Los Alamos; and during his years as a department director, he presented 30 budgets.

He said, “I’ve worked to establish … a professional, service-oriented court.” He has also shared what he learned and established with other courts.

Turning to another important issue, he said, “Our kids are going to make mistakes.” He said he tries to deal with their mistakes locally instead of referring them to the State Children, Youth, and Families Department.

He is aware, he said, that in Municipal Court, 90% of the defendants represent themselves. It is important, he said, that they understand the court and its procedures, their rights, and the possible penalties.

He does his best to issue a “fair and appropriate sentence or referral.”

In dealing with repeat offenders, he noted, he often finds that alcohol or drug addictions and behavioral issues play a role. He said he tries to look at the “root causes” as part of the process.

What would he like to change?  “We are really in need of (more) therapists” to go into our jails,” he said.

After all of the candidates had answered the questions posed to them in advance there was a brief period of additional questions from the floor.

The first questioner asked whether all three of the candidates had reared children in Los Alamos and whether they felt that Los Alamos was a good place for children to grow up.

All three said yes to both questions.

The second questioner asked, “What do you consider the hardest part of the job?”

Casados said, “Keeping a straight face” when you heard “wild” things in court. She also said that it is very difficult to deal with repeat offenders. You keep trying to help them, she said, but they break the law and come back again and again.

Allen, the lawyer, said, “Not knowing what judges are going to do.” It varies a lot between court systems, she said. There is “not a lot of standardization.”

Kirk said, “dealing with kids” who return again and again. He said he is always “seeking solutions,” but they are hard to find, especially for those with addictions. He spoke of one case in which a young offender was found to have “five drugs in his system.”

The third questioner, who had taught English as a second language, noted that defendants sometimes try to represent themselves and then get “eaten alive by the prosecution.” She asked the candidates what such defendants should be told in advance.

Casados said she advises defendants that they are at a disadvantage when they are going up against an attorney. She sometimes provides them with resources (books), but still, she must “hold them to a standard.” She said that in one case, she appointed an attorney to advise a client who was representing himself, but the attorney quit. “He just couldn’t take it.”

Allen commented that in the time of our forefathers, only landowners could serve on a jury. The times have changed, and things have improved, she said, but the rules are still complex, and they can be hard for individuals. Still, she said, a judge must “see people as people.” She added, “They want a voice; they want to be heard.”

Kirk said, “Municipal Court is a people’s court. I don’t get attorneys much.” He said a judge must “control what’s going on in the courtroom. You don’t let anyone badger anyone. It’s (part of) the decorum of the courtroom.” He does his best to see that everyone understands that.

The fourth questioner said her husband, a diabetic who was having a medical emergency, was arrested by a police officer who believed her husband was drunk, refused to listen to him, and “hauled him off and put him in a cell.” She also felt that the court was “not very understanding,” and her husband ended up picking up trash.

Allen said judge candidates are “limited on what they can say about specific issues.” She added that the criminal justice system is “set up for one type of situation.”

Kirk said, “It’s very important, when people come to court that they tell the whole situation … Sometimes, the judge doesn’t get the whole story.”

Casados said that if the women’s husband had been represented by an attorney, the attorney might have cut in and explained his problem, and the case might have been dropped. She added, however, that the judges “didn’t arrest him.” They “just see the (legal) paper.”

The fifth questioner asked Kirk whether he had any ideas on how to solve the shortage of therapists (which he had pointed out).

Kirk said, “Recruit, recruit, recruit.” He said he mentions the problem at conferences and tells the appropriate people, “ ‘I could fill your caseload in two weeks.’ ” He added, however, “We’re not unique.” There is  a shortage of therapists all over the state. “Most of New Mexico is very short of psychiatrists,” he said. He also commented that, “We are a relatively small community … We do have therapists, but they’re booked.” And, he said, some of them only work part time.