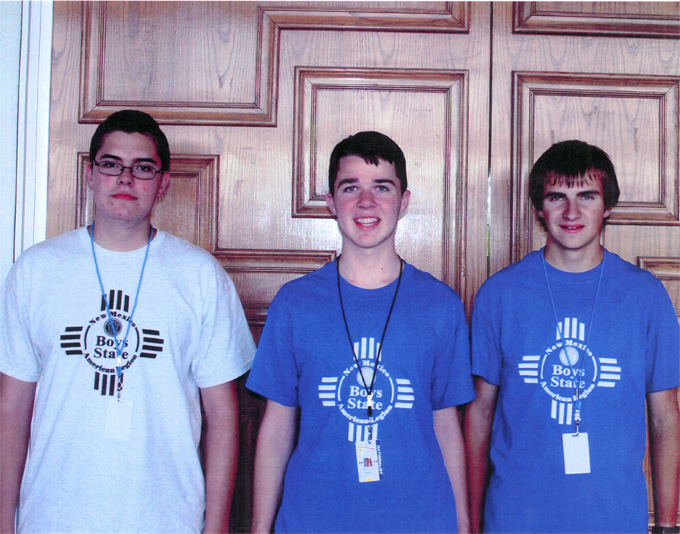 Daniel Ahrens, Jeremy Goettee and Esteban Summers represented Los Alamos High School at the American Legion Boys’ State held on the campus of Eastern New Mexico University from May 25 to 31.

There were 120 young men who completed the intense, total immersion in the political party, campaign and election of city, county and state officials. Political party leaders had to lead their party members through the issues, platform and the recruitment of a candidate. While the chosen candidates were campaigning. the party leaders were already working on the next round of elections.

City and county officials were immediately put to work creating a budget, passing ordinances and selecting appointed officials such as city attorney, county manager, and many more. The legislature selected clerks and a sergeant of arms in both the house and senate. Many good bills were passed and sent to the governor for enactment into law.

On the state level the Great Debate between gubernatorial candidate was the liveliest in years with about one hundred questions from the audience. The whistle stop campaign followed the debate as all candidate rotated between cities with their campaigns.

All state officers were sworn into office by guest of honor, New Mexico Secretary of State Diana Duran, at the mid-week banquet.

Goettee was elected as county assessor and Ahrens was elected as an alternate to Boys’ Nation, where the delegates spend a week long sojourn in Washington, D.C. Ahrens received a silver medal.

Ahrens also won the prestigious Samsung Scholarship worth $l,000 that places him in competition with 49 other candidates competing for several $20,000 scholarships.

In addition to the honors and certificates, each participant earned thee college credit hours from Eastern New Mexico University that are fully transferable to another university.