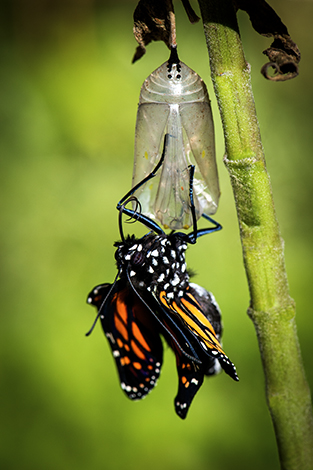 Mesa Public Library’s Upstairs Art Gallery will be the site for some exceptional art work with international ties June 5 through June 27.

Three artists of the collaborative Threading Forever, and one additional special guest, will show works ranging from sculpture to digital art and photography.

Threading Forever has been brought together through the efforts of Jemez resident and sculptor Harriette Lawler. A long-time resident of New York City and a veteran of many exhibits throughout the United States and Europe, Lawler is co-founder and co-director of two artists cooperatives. She has organized and curated many art exhibits, taught children’s art classes, and designed and published two books of art and poetry.

Lawler’s work often starts with a flat piece of metal, which she then transforms into something much more fluid with the application of heat. She achieves color by oxidizing, weathering or torching the copper or steel.

“Thus, in a very literal fashion, I also paint with fire and water,” Lawler said. “My work relates to the changing mental, spiritual and emotional landscapes that we traverse in life. Spaces are defined to convey a particular realm of existence, quest, gesture, moment in time, or saga, reflecting the dichotomies of life: order/chaos, refinement/rawness, the primal/the intellect, tranquility/turbulence.”

From a very different corner of the globe, artist Mohammed Bin Lamin is a native and a resident of Misurata, Libya. As an outspoken activist for peace and freedom, he was caught up in Libya’s regime change and imprisoned in the notorious Abu Salim prison in February 2011.

Not only did he survive that horrendous experience, he also made many drawings on the walls of his prison cell. The prison was liberated in August, and his prison drawings became the subject of a BBC interview after that. Bin Lamin will not be able to travel to Los Alamos for the exhibit, due to ongoing health problems.

The work that Bin Lamin will exhibit in the Los Alamos show is created using a technique he developed himself which involves burning the paper. He works in several other media, primarily sculpture and drawing. 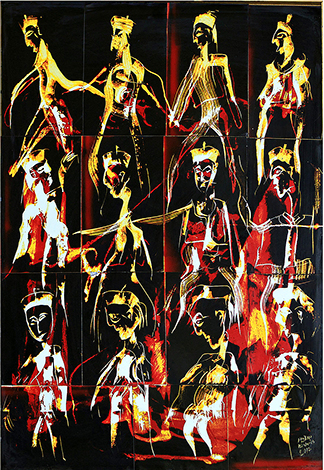 He has shown work at the 2009 Florence Biennale, at the 2006 Changchun China International Sculpture Symposium, and at a London show in 2012 called “The Libyan: First Exhibition of Post-Gaddafi Art.”

One of Bin Lamin’s well-known works is a monumental sculpture called “No to Guns.” To create the sculpture, he made large hollow letters spelling “NO” of glass, and filled the letters with more than 1000 toy guns he collected from children in Misurata.

The LEGO foundation gave a box of peaceful toys to each child in exchange for each toy gun collected. The purpose was to try to change a pervasive culture of violence- if parents could see children giving up their toy guns, perhaps they could be persuaded that a peaceful society is possible.

Theresa DiMenno has focused her camera’s lens recently on the life cycle of the Monarch butterfly. She has an extensive body of work which includes portraiture, nature photography, plants, insects, people, animals and buildings. Her work has been published in Rolling Stone and Texas Monthly, among many other publications. DiMenno’s unique and loving vision of every subject she portrays comes through loud and strong in her work.

Di Menno’s Monarch butterfly photos serve to bring understanding to this dwindling species, which is the victim of ever-shrinking habitat throughout its huge migrations. Herbicide use has removed many host plants from the butterfly’s migration route as well.  There is increasing concern related to the ongoing decline of monarchs; based on a 2014, 20-year comparison, has dropped more than 50 percent since 1997 and the numbers east of the Rockies have declined by more than 90 percent since 1995. 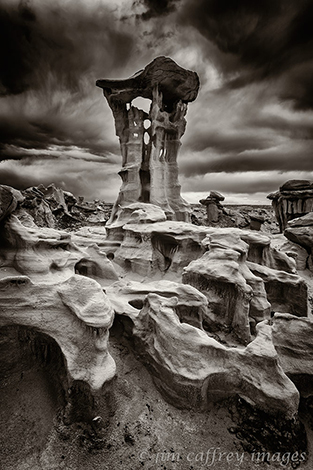 Jim Caffrey is a New Mexico photographer, teacher and guide who is a special guest of the Threading Forever collaborative for the show in the Upstairs Gallery. He will give a gallery talk at the opening reception 2-5 p.m. Saturday, June 6.

Caffrey captures a wide range of New Mexico imagery, from wildlife to landscape.

“As to my choice of subjects, I tend to forego the mountains in favor of the visual simplicity found in a desert landscape,” Caffrey said. “I love the raw earth, the rocks, the wide open skies, and the far horizons.”

He is always intrigued by the weird formations and abstract shapes and patterns found in New Mexico’s badlands.

The Upstairs Art Gallery at Mesa Public Library hosts shows by local and regional artists, as well as travelling exhibits, 10-12 times each year. The Gallery is open during regular library hours: 10 a.m. to 9 p.m. Monday through Thursday, 10 a.m. to 6 p.m. Fridays, 10 a.m. to 5 p.m. Saturdays, and noon to 5 p.m. Sundays.

For more information about the Los Alamos County Library system, which includes Mesa Public Library and the White Rock Branch library, call 505.662.8250, or go to www.losalamosnm.us/library.