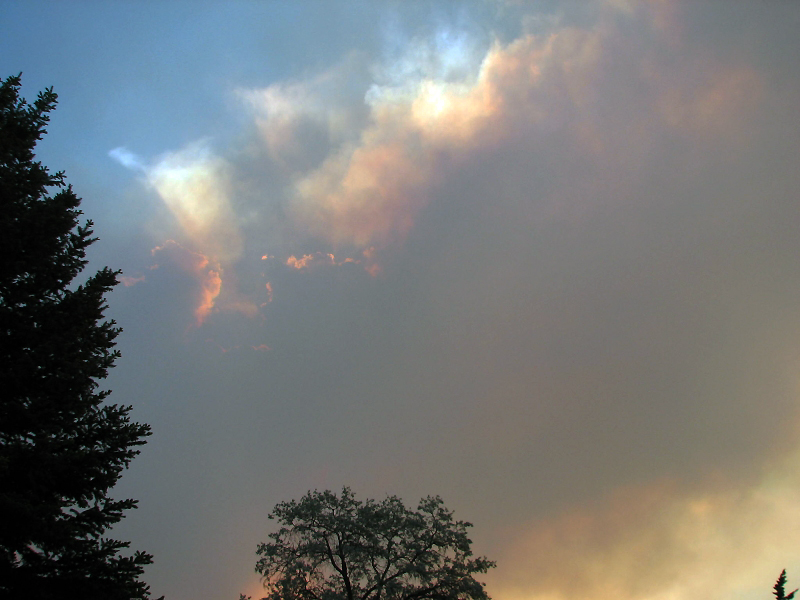 Summary: Today like yesterday, weather was the fire story. The winds on the fire were much stronger; 15-20 mph with gusts up to 30. Our temperatures increased but the humidity dropped back into single digits this afternoon. These three factors combined make for very active fire behavior. Tomorrow we can expect very similar conditions and fire behavior.

The fire has been in the base of Freelove Canyon for the past two days, but climbed to the ridge today. We continued to improve and widen the firelines along the west side where all the homes are. The fire burned approximately 1 ½ miles on the north and it moved further up on Redondo Peak, but did not go to the top. A large plume of smoke developed late in the afternoon that was visible from great distances.

NOTE: The public meeting that is scheduled for tomorrow night at the Madonna Parish Hall has been changed from 7 p.m. to 7:45 p.m. New Mexico Lt. Gov. John Sanchez will be in attendance.

Smoke: Smoke from the Thompson Ridge Fire is evident in several communities. Communities in the region will be impacted by that smoke and that from other fires in the area. Smoke sensitive persons in these areas need to be alert to this possibility and be prepared to take any necessary precautions.

Road and Fire Area Closure: The Valle Grande Staging Area is open to the public. All other points of entry to the Valles Caldera preserve are closed to public access due to fire activity.

Open and active: Communities in and around the Santa Fe National Forest remain open and accessible including Jemez Springs, Jemez Pueblo, Santa Clara Pueblo, Los Alamos and Bandelier National Monument. Camping, hiking and other recreational opportunities are available in the area.