This week we are opening the highly lauded film, Chef and will hold Edge of Tomorrow, The Fault in our Stars and How to Train your Dragon 2. Maleficent will end this Thursday.

Chef’s stellar cast includes Dustin Hoffman, John Leguizamo, Sofia Vergara, Robert Downey Jr., Scarlett Johansson, and Chef, John Favreau.We decided to open this film instead of one of the many blockbusters available now in hopes of bringing patrons with other interests to the Reel Deal.

As Moira MacDonald of the Seattle Times says, “If Chef were a musical, you’d walk out humming the food-and you might do that anyway.” We hope you come out and see this film which will only be in our theater for a one-week run. 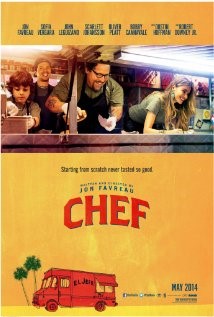 Chef: When Chef Carl Casper (Jon Favreau) suddenly quits his job at a prominent Los Angeles restaurant after refusing to compromise his creative integrity for its controlling owner (Dustin Hoffman), he is left to figure out what’s next. Finding himself in Miami, he teams up with his ex-wife (Sofia Vergara), his friend (John Leguizamo) and his son to launch a food truck. Taking to the road, Chef Carl goes back to his roots to reignite his passion for the kitchen — and zest for life and love. (c) Open Road

Coming attractions include:  Jersey Boys, Transformers: Age of Extinction, Dawn of the Planet of the Apes, Jupiter Ascending, Earth to Echo, Sex Tape, Lucy, and possibly 22 Jump St. We’re still not sure about Tammy. Any input would be appreciated.

Summer at the Movies, sponsored by Los Alamos National Bank is back again this year starting June 9. Free movies start at 10 a.m. every Monday, Wednesday and Friday for eight weeks.