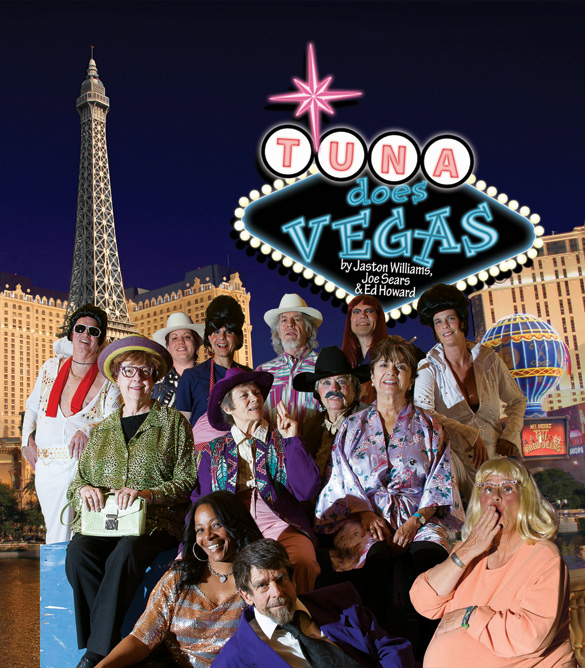 What does New Mexico and Tuna, Texas have in common? Texans! Lots of ’em. Only Texans want to get away and visit New Mexico, but you never hear of a New Mexican vacationing in Texas.

And nearly all the residents of Tuna want to get away to Las Vegas, Nev.–to gamble, to renew their wedding vows, to meet cowboys, to catch smut purveyors purveying smut so they can ban it, and just–well–get away.

Arles (pronounced Ar-liss) and Bertha want to renew their wedding vows in Vegas, away from Tuna and friends, and before they even leave town they discover that half the people in Tuna are quick to follow. There’s a lot of love in Tuna–love of every kind-good marriages, lukewarm marriages, love of rodeo cowboys, love of a Pekingese for a plastic duck, love of show business and love of French fries.

Director Lynn E. Alden has assembled a dynamite cast for the Dixon Players, who are presenting the hilarious comedy “Tuna does Vegas” by Jaston Williams, Joe Sears and Ed Howard at the Toolshed in Dixon.

If you’ve never been to the Tool Shed to see the Dixon Players (now in their seventh season) you will see a whole bunch of actors from the original cast of the Dixon Players Production of “Tuna Christmas” including Jeff Spicer as Thurston, Bertha and Inita, Ken Clark as Arles, Helen and Maurice, Brandon Santos as Aunt Pearl and Joe Bob, Lynn E. Alden as Charlene, Holly Haas as Didi, Kaye Johnson as Vera, and Amber Feavearyear as Petey Fisk, and David Rigsby, taking on a new role of Shot. They are joined by new Vegas characters including Al Graham as Anna, Yesca Sullivan as Elvis #11, Richard Martin as Elvis #42 and Edna Martin as Wo-Hu.

Tuna Does Vegas is the fourth and probably the last play in the series. The first, Greater Tuna, opened in 1981 and by 1985 was reportedly the most performed play in the country. It was originally performed and directed by the three authors. The Dixon Players performed Tuna Christmas in 2012 with a cast of eight playing the 22 characters to sell out audiences.

The Tool Shed is a snazzy new theater in Dixon. Take the Dixon turnoff (Hwy. 75) about 25 miles north of Española/25 miles south of Taos and drive less than one-half mile before seeing the Tool Shed on the left. Parking is on the right side of the highway. Come early and try out one of Dixon’s restaurants.