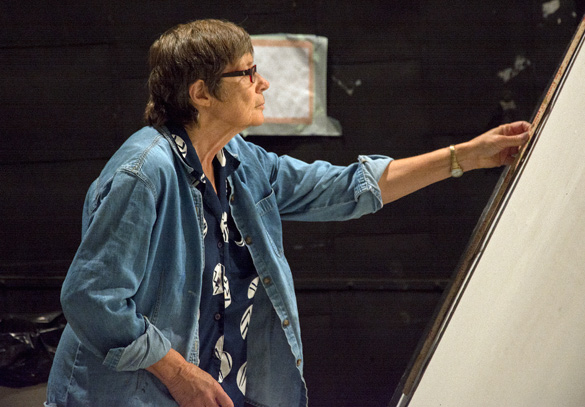 A native of Wisconsin, Haas studied at Marquette University until the age 19, when she went to New York City to be in theater. She attended Lester Polakov’s Studio of Stage Design while working as Santa Claus’ helper at Gimbels where she got her first big break in theater.

At 22, Haas passed the rigorous union exam and was taken into the United Scenic Artists. That same year, she designed the national tours of “Porgy and Bess” and “Luv.” She designed off-Broadway, assisted renowned designer Ming Cho Lee for more than three years, designed over 150 shows for local and regional theaters, and was the lead scenic artist for the San Francisco Opera for five years.

Haas took a break from scenic art and taught art full time at the New Mexico Penitentiary from 1990-1995, where she met her husband, who also worked in the education department.

In 1997, she returned to Los Angeles to paint more than 250 murals for the interactive play space for children based on the children’s book “Where the Wild Things Are” in San Francisco. She later redesigned and led the same mural project in Japan, overseeing the mural installations in Tokyo.

Haas taught at Los Alamos High School from 2002 to 2007, where she helped shape the drama program by offering theatrical design, stagecraft and acting. While teaching, she designed several Olions’ productions, including “Singin’ in the Rain,” where she first met director and choreographer, Patrick MacDonald, who taught the original Gene Kelly tap dancing steps to the leads.

She and MacDonald have done several productions together since that time, with the Dixon Community Players, started by Holly in 2007 after retiring from teaching. MacDonald has performed at the Toolshed with the Dixon Players, including being roles in “Holly’s Follies” and starring as Snoopy in ”You’re A Good Man Charlie Brown,” with vocal coach Gretchen Amstutz.

The three are now working together again to create this “monster” of a production, Haas’s first creative endeavor with the Los Alamos Light Opera. In May 2015, she directed and designed the set for “Avenue Q” at the Los Alamos Little Theater.

Haas has an master’s degree in art from San Francisco State, a Master’s of Creative Expressive Therapy from Southwestern College in Santa Fe and an alternative teaching license from Northern New Mexico College in Española.

She and her husband, Will De Maret, own and manage Rock Pool Gardens, a charming spa and vacation rental they established in Dixon almost 20 years ago.

There is still time to enjoy the Los Alamos Light Opera’s “Young Frankenstein,” with extraordinary set design by Hass, brilliant music from Amstutz, and MacDonald’s fantastic choreography and stage direction. The production is on stage at 7:30 p.m. Friday and Saturday, Oct. 9-10 at the Duane Smith Auditorium. Tickets are available at CB FOX, at the door, or online at http://www.brownpapertickets.com/event/2055226. Parents are advised that the show contains bawdy humor, double entendre and innuendos.