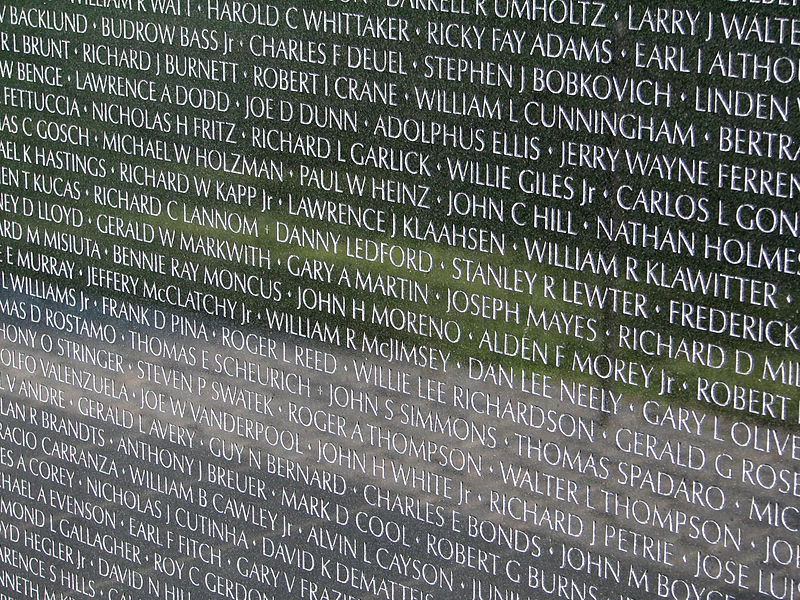 One panel of ‘The Wall’, displaying some of the names of fallen U.S. service members from the Vietnam War. Courtesy/wikipedia

SANTA FE—A half-size replica of the National Vietnam Veterans’ Memorial Wall in Washington, D.C., is traveling to Santa Fe for a six-day stop. The Wall That Heals is scheduled to arrive at 1 p.m. Tuesday, March 18 at Ft. Marcy Park.

The 18-wheel truck carrying the Wall will be escorted by motorcycle-riding members of the American Legion Riders Post 26 and the Patriot Guard Riders on the Wall’s last leg of its arrival into the city. The truck will remain parked overnight at the park.

Set up of the 250-foot-long wall will begin at 8 a.m., the following day, March 19. The exhibit is scheduled to open at 4 p.m. to the public. There is no charge for visitation or viewing. The site will remain open 24-hours a day until 6 a.m. Monday, March 24, when the Wall will be disassembled in preparation for travel to its next stop in San Antonio, Texas.

The Wall That Heals was unveiled in 1996 by the Vietnam Veterans’ Memorial Fund (VVMF)—the organization which manages the National Vietnam Veterans Memorial Wall bearing the names of the 58,286 service members killed in action during the Vietnam War. The names of 398 New Mexicans are among those etched in the beautiful granite memorial.

The half-size Wall That Heals consists of 24 powder-coated aluminum panels—each one bearing six columns of names. According to the VVMF, the traveling half-sized replica of the National Wall tours the country with three goals in mind: To honor the KIA’s and all who served in the war, to educate the public about the war, and to allow the many thousands of veterans who have been unable to cope with the prospect of facing the National Wall to find the strength and courage to do so within their own communities, thus allowing the healing process to begin.

In addition to the round-the-clock viewing opportunity, the public is invited to attend numerous events scheduled during stop of The Wall That Heals in Santa Fe.

U.S. Air Force Chaplain William Toguchi Chaplain Toguchi has been invited to give the Invocation. He is one of only two active-duty military personnel who saw combat action in Vietnam.

Sunday, March 23, Gov. Susana Martinez has been invited as the Keynote Speaker at an 11 a.m. Honoring Ceremony. A history of The Wall will be read by Tim Tetz, the Director of Outreach for the Vietnam Veterans Memorial Fund (VVMF), the organization which helped build both the traveling and national Memorial Wall.

Tetz also will honor and thank Vietnam Veterans of America (VVA) Northern New Mexico Chapter 996 for its work in making New Mexico the first state to collect the pictures when the VVMF’s nationwide Call for Photos project was launched in 2009. The photos are being gathered for a digital display to be featured in a planned national Vietnam War Museum in Washington, D.C.

There is no admission fee for the public to visit The Wall That Heals or for any of the ceremonies. Parking is free, but is limited and is available on a first-come, first-served basis.