The Summer Concert Series Rocks On! 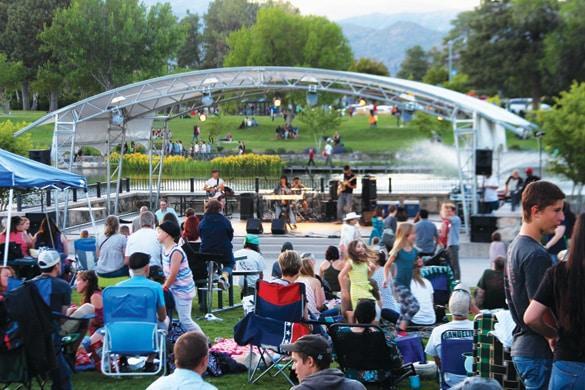 Scene from the first Los Alamos Summer Concert of the 2018 Season at Ashley Pond Park. Photo by Bonnie J. Gordon/ladailypost.com

The Los Alamos Summer Concert is off and running! Any lingering fears that Abe Gordon and Kara Robertson couldn’t fill the clown-sized shoes of Russ Gordon, who  coordinated and managed the Concert Series for 28 years, have been put to rest by the first two great concerts, Dre Z Melodi and Eddy & the Nomads with DK & The Affordables.

“The first concerts went well,” Robertson said. “I’m so excited for the rest of the season. We’re working out the little kinks as we go.”

No kinks were in evidence to concert-goers, who are turning out in droves for this Los Alamos tradition. All concerts are 7 p.m. Friday evenings at Ashley Pond Park in downtown Los Alamos. Atomic City Transit is extending its service Friday nights, so people don’t drink and drive. Food and drink is available from onsite venders, or bring a picnic. The concerts are family-friendly, and a great place to meet up with friends for a night of music under the stars.

Gordon and Robertson are coordinating with the community around local events and it’s their goal to involve everyone, including youth. They’re working with the Teen Center and the public schools on Youth Night, which is Aug 18. The concert will feature Carnage The Executioner, MC, beatboxer, rapper, hip-hopper and storyteller.

“He’s giving a workshop, so people can see what he does and how he does it and maybe even try it themselves,” Robertson said.

June 15 is Pride Night at the Concert Series, in conjunction with Los Alamos Pride Week, and none other than the Red Elvises will return to Los Alamos for their annual show.

Summer Concerts are free to attend, but they are not free to put on. Los Alamos County ponies up, as do many local businesses, including the Los Alamos Daily Post, but donations from individuals are important, too. Robertson said the hardest thing about running the Concert Series is fundraising.

Community members can help by emailing gordonsconcerts@outlook.com or calling 505.423.3048 to receive a donation form or simply send a check to Gordon’s Concerts PO Box 2187 Espanola, NM 87532. Donors also can visit gordonssummerconcerts.com and contribute through PayPal. There also is a new GoFundMe page at https://www.gofundme.com/gordons039-concerts .

The website at gordonssummerconcerts.com is now updated with all the latest concert information. For up-to-the-minute pictures, comments and to share the joy with your neighbors, visit the Series on Facebook at https://www.facebook.com/pg/gordonsconcerts/posts/?ref=page_internal .

“Come out and have fun!” Robertson urged. “We love sharing the series with the community.”

It’s looking to be another great season, with something for everyone, from bluegrass to hip-hop. See a brief description of the bands at right. Visit the Concert Series website for handy links to websites and YouTube videos of the musicians.

“There’s not a single concert I’m not looking forward to,” Robertson said.

JUNE 8 Baracutanga/ ChamberFest Night
Baracutanga is a seven-piece band representing four different countries (Bolivia, Ecuador, Peru, USA) that prides itself on arranging traditional South American rhythms in new and interesting ways, such as huayño and cumbia with Middle-Eastern darbuka or mixing Afro-Cuban bata and Afro-Peruvian festejo with Andean zampoñas, among several other rhythmic combinations.
JUNE15 Red Elvises/ Pride Night
Igor Yuzov grew up in the former Soviet Union, where folk music was the norm and rock’n’roll was illegal. As soon as it became possible, Igor left Russia for America with his “Folk’n’Roll” band Limpopo. In 1995, Igor dreamed that Elvis Presley came to him and told him to start playing rock’n’roll. Igor and his Russian friends became Red Elvises. Evolving over the years, Igor’s music has been labeled “Siberian Surf Rock” .
JUNE 22 Jonathan Tyler & The Northern Lights
Hard rock and blues. The band was formed in January 2007 in Dallas, Texas by Jonathan Tyler, Brandon Pinckard, along with Oklahoma natives Nick Jay, and Jordan Cain.
JUNE 29 Grayson Capps
Singer-songwriter from Alabama
JULY 6 Cali Shaw
NM eclectic folk-rock. Neo-folk-rock from Albuquerque. Cali Shaw Band creates Neo Folk Rock with a Southwestern twist.
JULY 13 Liver Down The River/ Science Fest Night
From Durango Colorado comes a six piece band of musicians. The music is a blend of original and improvisational compositions that take the listener on a journey. Each member brings their own inspirations and elements to the sound. The music is a blend of original and improvisational compositions.
JULY 20 Ruben Moreno & The Zydeco Re-Evolution/ Daily Post Night
Cajun & Zydeco from Houston. Sizzlin. Locked down dance groove. On stage playing Zydeco – balancing fundamental respect for the traditional sounds and dance grooves with a willingness to take Zydeco in fresh directions absorbing rhythmic and melodic edges from the cultures and generations Moreno is immersed in.
JULY 27 Sugaray Rayford/ LANB Night
Sugaray Rayford “Sugaray” Rayford is an American electric blues singer and songwriter. He has released four albums to date and in 2017 was nominated for 4 Blues Music Awards.
AUG. 3 Eric McFadden/ Plateau Property Management
McFadden is a virtuoso of the six-string. He has toured the world both as a solo artist, as well as traveling with funk legend George Clinton (Parliament/Funkadelic), and rock legend Eric Burdon (The Animals).
AUG. 10 The Derailers/ Los ALamos County Fair & Rodeo
Their music celebrates the legacies of Buck Owens, George Jones, Roy Orbison, Elvis Presley, Charlie Rich and the Beatles, while still being on the edge of today’s country music.
AUG. 17 Carnage/ Youth Night
Carnage is a self-trained song writer who’s skilled enough to compose a heart-felt story as easily as he can craft an intricate battle rap. Carnage The Executioner was born to do two things: instruct and entertain.
AUG. 24 Whitewater Ramble/ Zia CU & L.A. Schools CU Half Night
“High-Octane Rocky Mountain DanceGrass.”,WWRuses a simple recipe to craft it’s sound: start with bluegrass instrumentation, add drums, and finish with a boundary-less approach to grassing-up everything from disco house grooves to roots to Americana.
AUG. 31 Coral Creek
Fusion of bluegrass, country, rock and reggae, an Americana / Newgrass band featuring the original music of Chris Thompson and Bill McKay and performing a vast repertoire of original songs and Americana classics