The Red Elvises are Coming! 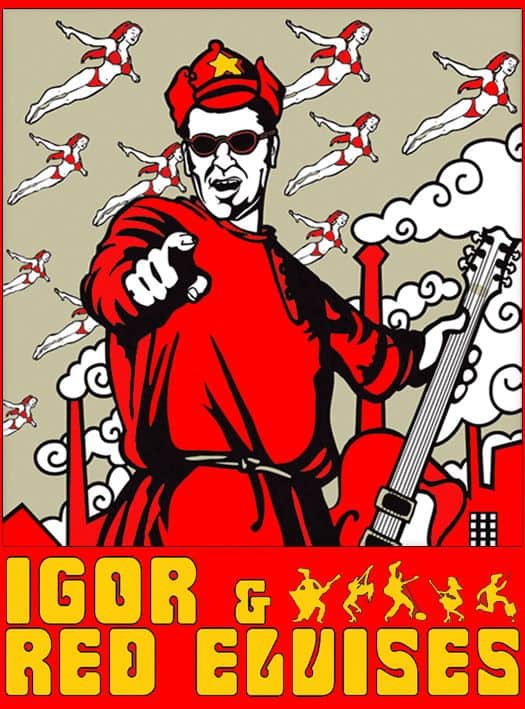 C’mon out Friday, May 25 to Ashley Pond. The show starts at 7 p.m. and goes till 10 p.m.
The original members of the Band came out of Moscow, Russia as a folk and folk-rock band.
The band moved to Santa Monica,Calif. They were personally welcomed by President Ronald Reagan.
They won first prize on Ed McMahon’s TV show. In Cal., singer/ band leader/ guitarist met Elvis Presley in a dream and the king told Igor to “start rockin,’ man.”
By 1995, they were a Siberian surf-rock, Russo-American rock band.
They became a major part of a street concert series in Santa Monica called the 3rd St. Promenade Series.
Things were happening when the City of Santa Monica took Igor & the Red Elvises to court  to quit playing on the streets. The crowds were too big.
(Los Alamos County Council and the Police Department support our Series.)
They’ve been playing all over California, the U.S. and the entire world ever since. I have a DVD of them playing in front of 30,000 people on Moscow’s Red Square.
The bassist plays a 6-foot-tall balalaika and lives in Thailand. All this success and Igor & the Red Elvises love it here.
This is the 9th time they’ve played our town since 2003. If you haven’t caught this most entertaining rock band, you shouldn’t miss the show Friday.
You’ll understand why they say, “The Red Elvises, your favorite band!”
Friday night is KRSN & Best Western Hilltop House Night. The HTH and KRSN have supported the Concert Series for 23 years and we thank them.
The LA County Summer Concert Series is made possible by the County of Los Alamos. The Series is also sponsored by many local businesses, friends and professionals.
Please shop locally. Have your friends and family visit OUR town, stay in our hotels, eat in our restaurants.
This is how we pay for our schools, parks, LAPD and concerts.
Our new website is www.gordonssummerconcerts.com. You’ll see who’s coming to town, listen to the acts, read about them, see who our sponsors are, etc. My new email is russ@gordonssummerconcerts.com.
Friday, June 1 we’ll be back at Ashley Pond with the great bluegrass and folk fiddler, Laurie Lewis accompanied by the multi-instrumentalist, Tom Rozum.
Menu
LOS ALAMOS