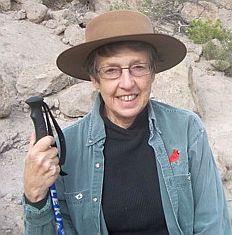 This is truly Wildflower Paradise. The walk this rambler will share is near the Guaje Pines Cemetery, joins the Dot Grant Trail (See Craig Martin, Los Alamos Trails, 2nd ed., #20.) and returns by an unnamed trail.

There are a whole complex of trails in this area and the one described is about a mile around an interesting loop with two rather different microenvironments. This rambler identified more than two-dozen species on this particular day, and experts will see and know twice as many.

Follow Diamond Drive north and turn left onto Range Road just beside Fire Station #4. Pass the Ponderosa Estates sign on the left and park on the shoulder of the road before it turns left towards the cemetery.

The trail leads off to the right through widely spaced Ponderosa Pine with no trailhead sign. Immediately one is surrounded by wildflowers of many colors and shapes.

The game is to see how many varieties one can identify within a hundred feet of the car. This rambler immediately spied Golden Eye, Three-nerve Goldenrod, Scarlet Gilia, and Showy Fleabane (Aspen Daisy). There are many local fleabanes, but this one is most common. 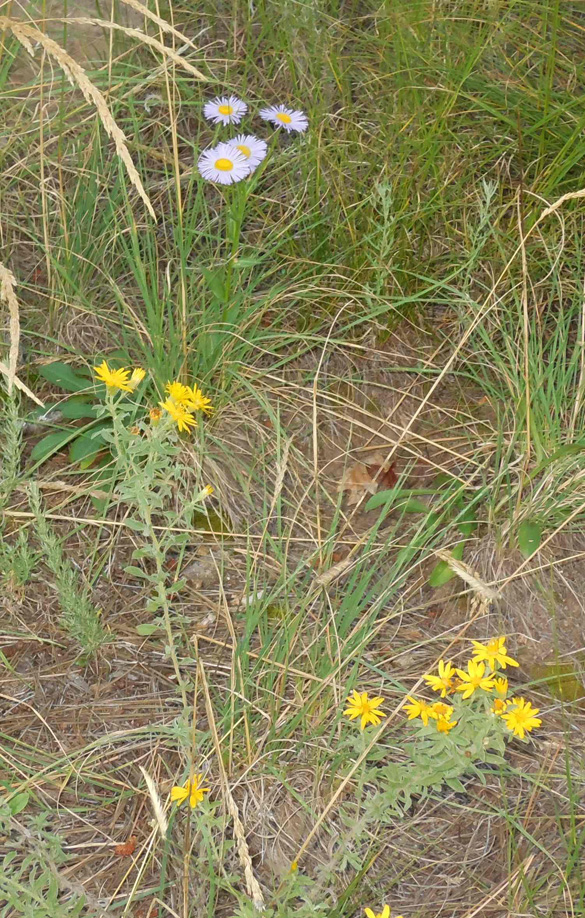 Golden Eye in the foreground with Showy Fleabane in the background. Photo by Nina Thayer

Fifty feet down the trail are several pink Nodding Onion on the left.  Shortly this trail crosses another, but we will continue straight ahead and up the gentle slope.

Now it is time to differentiate between two of the many DYCs (damn yellow composites) both named golden eye for their yellow composite flowers with yellow ray and disk flowers. The first Golden Eye is shorter, often bush-like, 8 to 18 inches high and blooms from late June with curly alternate spatula-shaped leaves. Dorothy Hoard called it Golden Aster.

The next golden eye along the trail is Showy Golden Eye. It is taller (2 to 3 feet) with larger flowers and thin, opposite leaves.  Except for the Giant Sunflowers, which we will discuss and picture next month, it is the predominate yellow flower you see as you gaze across the meadow to the left. 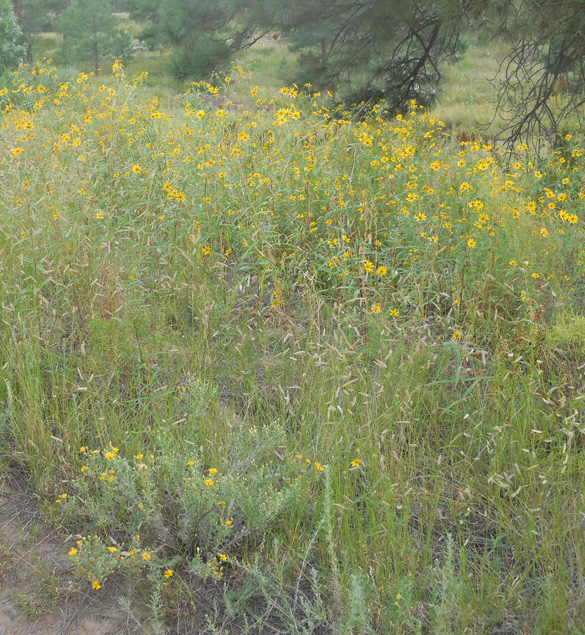 This is a lightly shaded environment and the Scarlet Gilia with bright red trumpet-shaped flowers are thriving this year.  They are a little past their prime and many scarlet petals lie among the grasses. 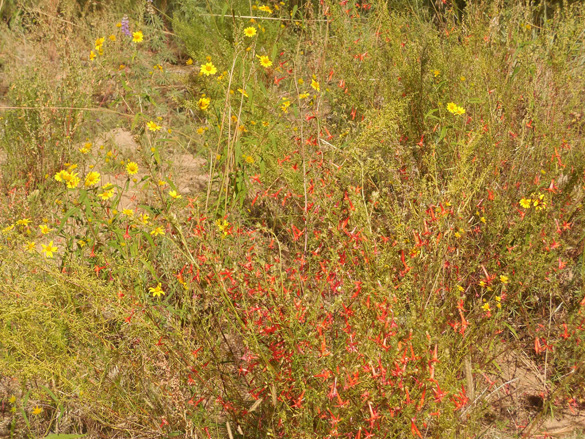 If you are both sharp-eyed and lucky you may spy several Pleated Gentian. The blue and blue-purple flowers are pleated along the single 12-inch stem. They are rather inconspicuous, uncommon and very handsome.

Keep on this trail as it heads down toward Rendija Canyon. Soon it joins another unnamed trail. This is the turnaround point. Take a sharp left back away from the canyon and towards the large meadow that we just skirted.

Notice we are in a new microenvironment. It is sunnier and dryer and the mixture of wildflowers has changed. Both Yellow Sweet Clover and White Sweet Clover crowd the trail. 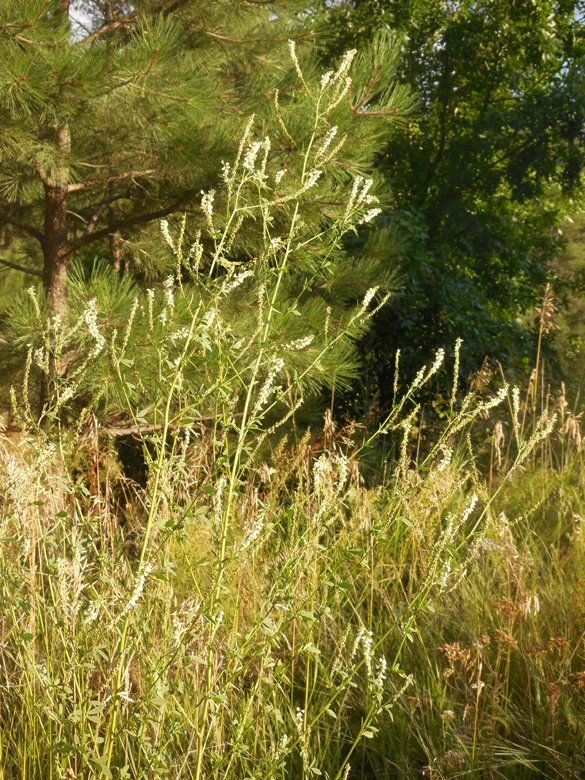 The 4-8 feet tall spikes of Mullen are everywhere along with Mountain Gumweed. Mullen have  soft velvety leaves with an occasional yellow bloom on their tall greenish spikes. Gumweed are the 2-3 foot high bushes with sticky yellow round flowers. Oddly, this composite has yellow ray flowers in Colorado and the subspecies here in New Mexico has mostly disk flowers. 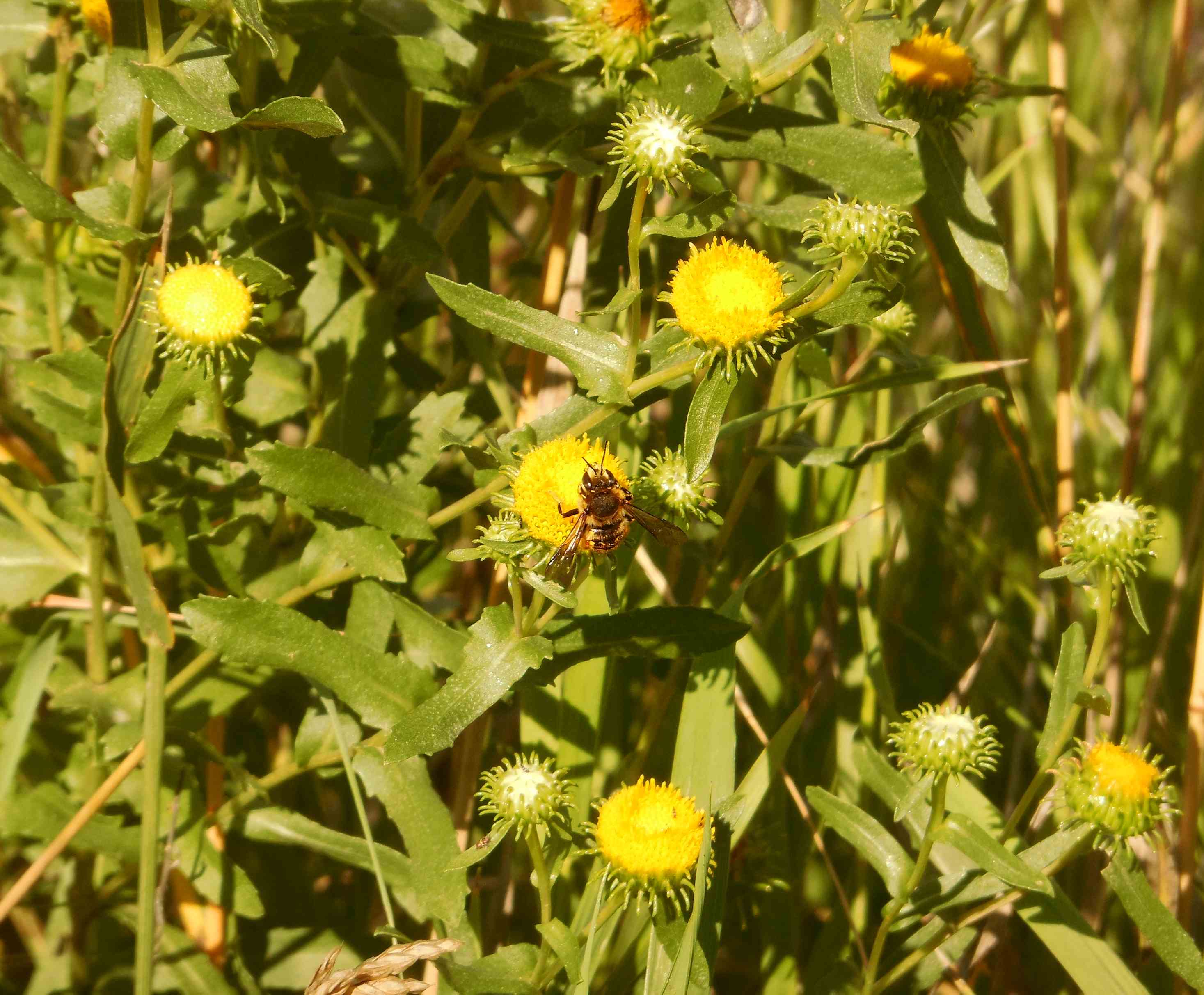 The end of the trail is marked by an iron gate and just past it on the left is the final treasure, a large dense mass of showy pink and white flowers called Coronilla or Crownvetch.

The spherical flowers are of the Pea family with many leaflets along each compound leaf stem. 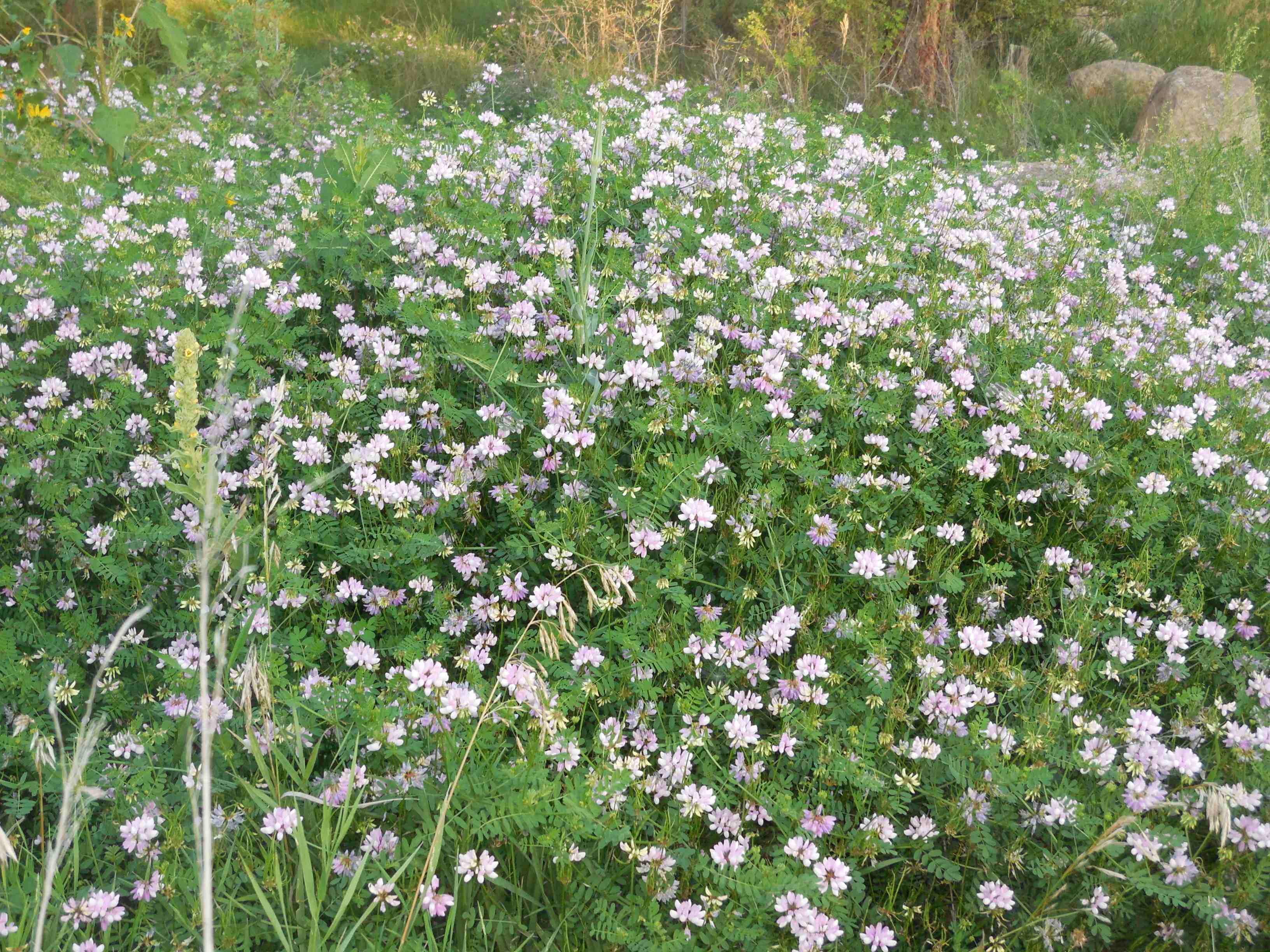 Coronilla are not native and likely came with the reseeding after the Cerro Grande Fire. What a beautiful reminder of both the change and renewal that follows wildfire.