‘The Other Place’ Will Break Your Heart, But It’s Worth It 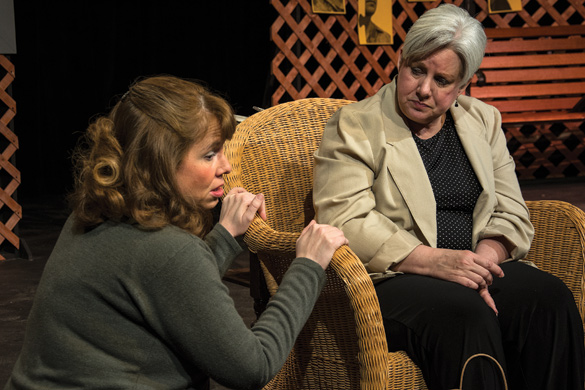 The Other Place by American playwright Sharr White is sure to strike a cord with Los Alamos audiences.

At 52, Juliana is a brilliant drug-company scientist. She is giving a speech at a neurological convention.

As she speaks, we cut away to scenes with her doctor, phone calls from her estranged daughter and conversations with her husband. She continually speaks of “the other place”, a cottage on Cape Cod where Juliana feels she may reunite with her missing daughter.

The first inkling that something may be amiss comes when Juliana spots a bikini-clad woman in her audience, who then mysteriously disappears. We begin having doubts about Juliana as a narrator that magnify as the play goes on.

As Juliana’s self-confidence gives way to doubts about her sanity, her emotions range from rage to confusion to heart-break. It turns out this fierce intelligent woman who engages our empathy has been keeping herself together with bailing wire and twine for many years.

A tour-de-force performance by Cindy Hines as Juliana keeps us on the edge of our seats. We’re rooting for her one minute and annoyed by her the next on a rollercoaster of emotions that just keep coming.

Eric Bjorklund is excellent as Juliana’s husband Ian, a man caught in an impossible situation, trying to maintain his dignity and his love for his wife as a storm breaks over him.

Also excellent is Andi Bishofberger, who plays a number of disparate roles, managing to convince us she’s all these people. She is especially excellent as the harried but empathetic victim of a home invasion by a very confused Juliana. The scene between the two women was the highlight of the play for me.

“The Other Place” is ably directed by Gwen Lewis. A minimal but effective set by Paul Lewis adds much to the drama.

This is a very good production, but it’s very hard to watch. If you’ve dealt with dementia in your own life it may be impossible to watch. Be ready for that, but the splendid performances are worth it.

The normal three weekend schedule will be slightly different as this play will be Los Alamos Little Theatre’s entry into this year’s American Association of Community Theatre’s AACTFest, March 2-5 in Las Cruces.

Tickets are $14 ($12 for students and seniors) and can be purchased at CB FOX, Brown Paper Tickets or at the door.