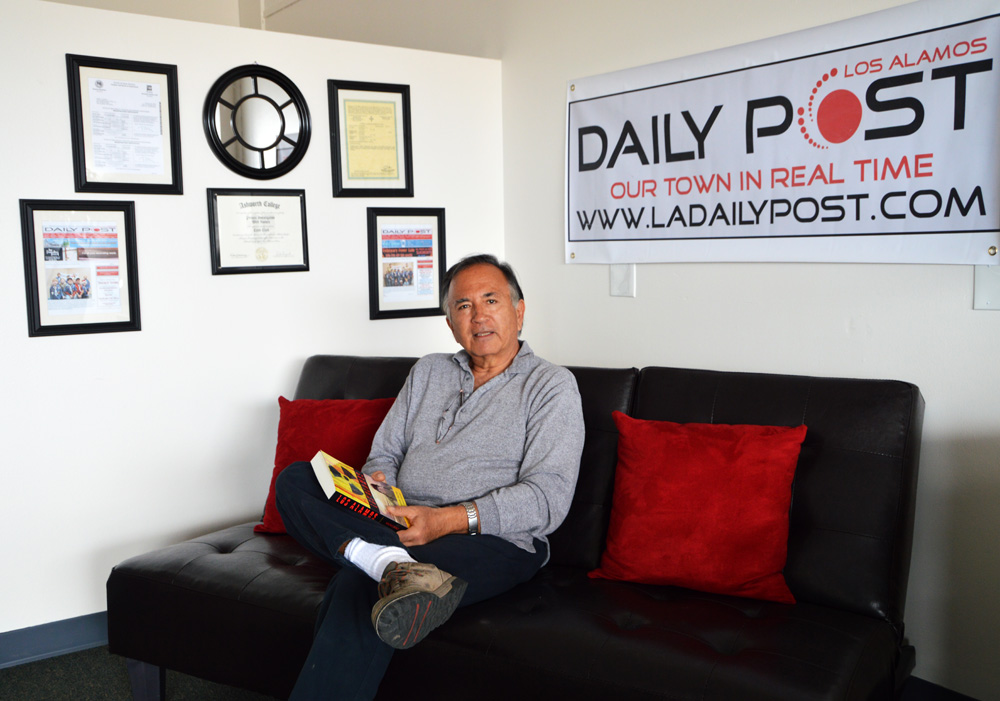 “Someone must have slandered Josef K., for one morning, without having done anything truly wrong, he was arrested.” So begins the novel “The Trial,” by Franz Kafka, published in 1925.

There’s a new book just out about someone who resembles Kafka’s beleaguered protagonist Josef K in The Trial, but the new book was not written by Franz Kafka, but rather by Chuck Montaño, a former auditor at Los Alamos National Laboratory, who was caught up in a web of bureaucratic circumstances during the problem years at the lab at the turn of the century.

He wasn’t arrested like Josef K, but he was confined to a cubicle for nine months, shunned, distrusted, and unable to work

Montaño’s book sets out to tell how he was retaliated against for calling attention to pervasive procurement violations at the laboratory. This was at the time that Glenn Walp and Steve Doran, two distinguished law enforcement professionals were hired to lend extra prestige to an investigation of fraudulent behavior at the laboratory. They were abruptly fired in November 2002 after they uncovered a major purchasing scandal.

The laboratory’s mishandling of that crisis is at the heart of Montaño’s tale, but he began his journey several years earlier. His new memoir, Los Alamos: Secret Colony, Hidden Truths is about the making of a whistleblower at Los Alamos National Laboratory. The author kick started his personal struggle for justice as he approached mid-career at LANL in the early 90s. As a native of Northern New Mexico of Hispanic descent, he became increasingly aware of and personally offended by what he and others have identified as a pattern of discrimination at the lab.

“The person chosen over me this time had been with the laboratory for less than a year; prior to that he was a manager of a hamburger franchise,” Montaño write of his disappointment about losing out on an opportunity for professional advancement. “This was the last straw, after sixteen years of my hoping things would improve on their own. It was time to complain.”

Montaño complained, only to find that the complaint itself would lead to further grievances that would in turn have continuing consequences for the remainder of his career, and leading him now to a comprehensive criticism of the entire system of values and politics that the laboratory represents.

In responding to his complaint, the human resources department worked closely with the legal office — “for one reason,” writes Montaño, “to protect the institution from being sued.”

Months later, the laboratory’s human resources office found in Montaño’s favor, but the laboratory director was able to use his prerogative to overturn the decision. Years after, a class-action suit brought by the American GI forum on discriminatory practices similarly suffered long delays, but was finally settled in favor of the plaintiffs. By then, there were bigger problems on the horizon.

The fall of the Soviet Union in December 1991, regarded as good news by much of the Western world at the time, ushered in a period of employee unrest and uncertainty at LANL, as its nuclear weapons mission appeared to have lost its primary reason for being.

The last American nuclear test explosion in September 1992, opened a new era in the history of nuclear weapons. The Comprehensive Test Ban Treaty was signed by President Clinton, even though it was never ratified by Congress. Before a new political rationale could be put in place that would focus on securing and maintaining the nuclear weapons stockpile without nuclear testing, Los Alamos went through a period of trying to reduce its workforce. The effort was controversial, criticized as discriminatory and arbitrary and the results were mixed.

It was during this time that Montaño helped create an organization to represent employees at the laboratory and became the founding president of Citizens for LANL Employee Rights (CLER) that spearheaded reduction in force efforts and subsequent worker’s rights campaigns of the 90s. Montaño quickly became a staple in local and national news stories. A variety of news quotations and snatches of official documents, along with excerpts from legal transcripts, add to the flavor of the times and frequently help corroborate or fill in Montaño’s account of the stories he has selected to make up the big story of Los Alamos.

LANL continued to hit hurdles, including a notably botched imprisonment of a Taiwanese American physicist Wen Ho Lee, who was suspected of security violations that were almost entirely dismissed in court, and mounting evidence of mismanagement.

When Admiral Pete Nanos was suddenly named to replace John Browne as lab director in December 2003, the new director’s promise to “drain the swamp,” shocked many listeners, and at least partially because it was true, although most employees were unable to identify with the way they were being characterized.

In 2004 Montaño recounts setting in motion a whistleblower complaint that would take another six years to resolve. He had disclosed information for which he was supposed to be protected, including information about disparities related to minorities and women, and he had disclosed information involving procurement improprieties and irregularities. In retaliation, he said, he had been given “dead-end” jobs and “blacklisted” from doing auditing work for which he was trained.

Those who know Montaño’s story will recall the matter of Tommy Hook, also an auditor and colleague at the lab. One night, Tommy Hook was beaten up badly in the parking lot of “Cheek’s” a seedy nightspot in Santa Fe. He claimed that he was there to meet an unknown person. The man said he would provide information related to Hook’s procurement investigations.

Afterward, Hook charged that the perpetrators threatened him if he revealed anything more about the procurement investigations. Montaño took pictures of Hook’s battered face and shared them with the press. Later discrepancies crept into Hook’s story and, although two men were sentenced for the crime, there was never any evidence that linked them to the lab or the government or any of the suspects in the procurement scandal at LANL. Loyal to his friend, Montaño leaves the judgement open.

Montaño makes clear he would like to see closure on the question of whether LANL Deputy Director Dick Burick’s death in 2002, was a suicide as many believe and as a Los Alamos Police Department investigation concluded at the time, or possibly murder as Montaño, Walp and Doran all suspect based on a forensic analysis of the physical evidence.

Red flags went up on the issue when, after six years of delays in Montaño’s whistleblower complaint, a detailed investigative report prepared by Doran was put on the negotiating table, arguing that suicide could not be explained by the current facts and opening up the question of whether other higher-ups could be involved.

“Within days following that, the first cracks in the ice began to show, with opposing counsel expressing an interest in pursuing a settlement at last,” Montaño writes. The settlement came with some limitations, but he felt that the dispute had dragged on too long. “Plus it provided for my family and me a level of vindication and remedy that I could live with. And though I may never be able to divulge specifics about the settlement, suffice it to say that to this day I have no regrets.”