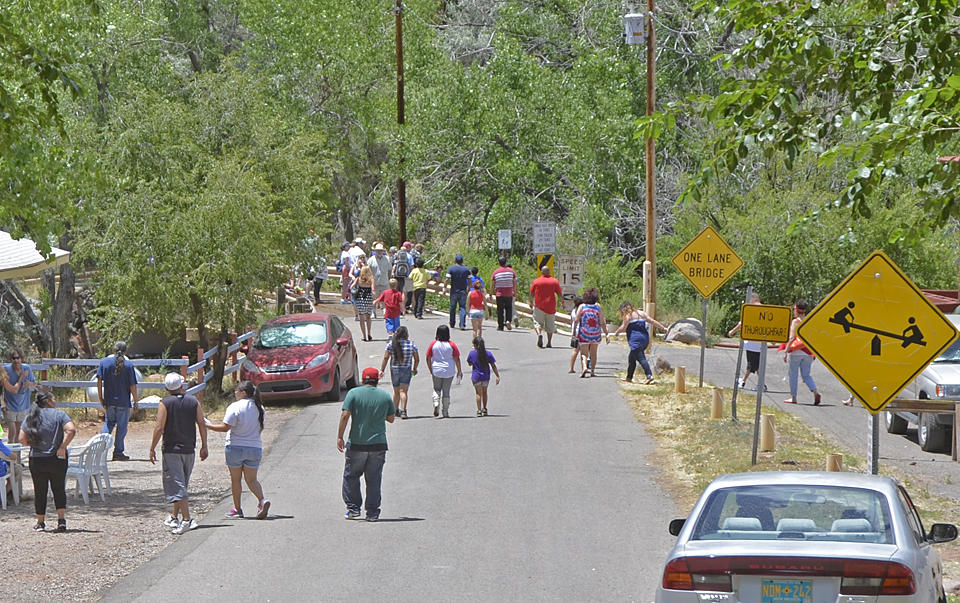 The crowd makes its way toward the bridge and riverbank Saturday in Jemez Springs at the start of the annual Great Duck Race. Photo by Ryszard Wasilewski/jemezdailypost.com 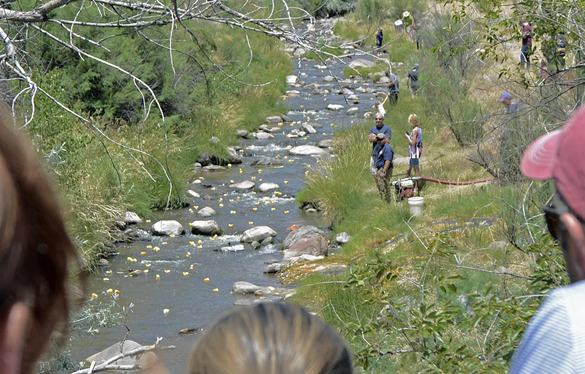 The ducks head downstream in the Jemez River. Photo by R.W./jemezdailypost.com 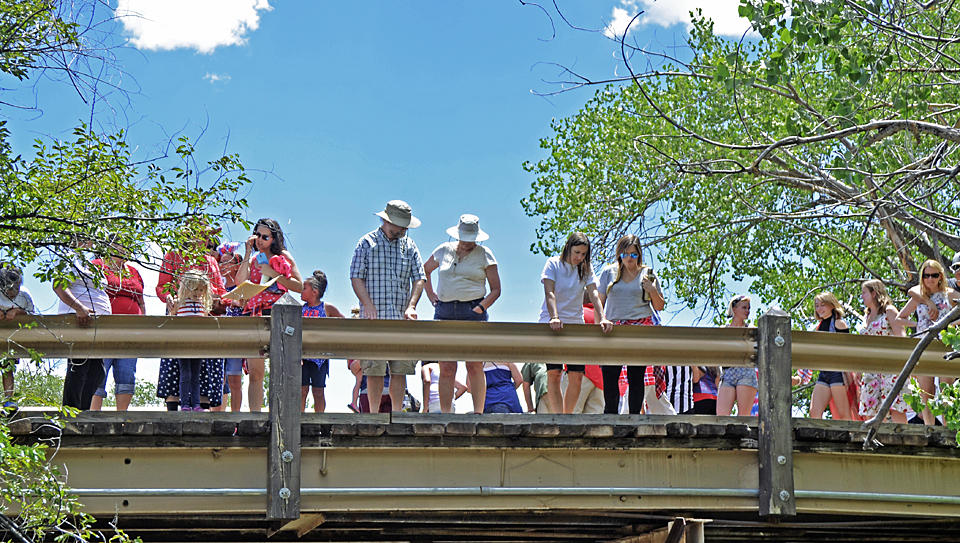 Crowds stood by the river banks and on the bridge, urging-on their favorite ducks. Photo by R.W./jemezdailypost.com

The annual Great Duck Race might seem to some to be at the periphery of Independence Day celebrations, but it is clearly a major sporting event for the village of Jemez Springs with swarms of yellow ducks, wearing white hats, jostling for position in fast moving currents of the Jemez River.

This year the event seems to have reached a new high, the river turning yellow with the little plastic contenders surging toward the finish line just past the bridge Saturday in the village. Tom Swetnam and Chamisa Swetnam-Macias released the ducks upstream, while Tom and Suzanne Swetnam’s son Tyson, with a team of helpers, caught them at the barrier at the finish line.

The results were called out to the crowd gathered by the bridge and then Mayor Bob Wilson, who was present at the event, dashed to the microphones in the bandstand to announce the 2016 Independence Day Duck Race to the crowds gathered in the plaza.

The Jemez Volunteer Fire Department was positioned with its vehicles by the river in the space behind the library and bathhouse, hosing down the slopes on the west side of the river in preparation for the fireworks display. Large numbers of ducks, dispirited at falling behind the race leaders, got caught in little eddies behind rocks and by the banks. The firemen turned their hoses on them, in riot control fashion, and flushed them downstream. 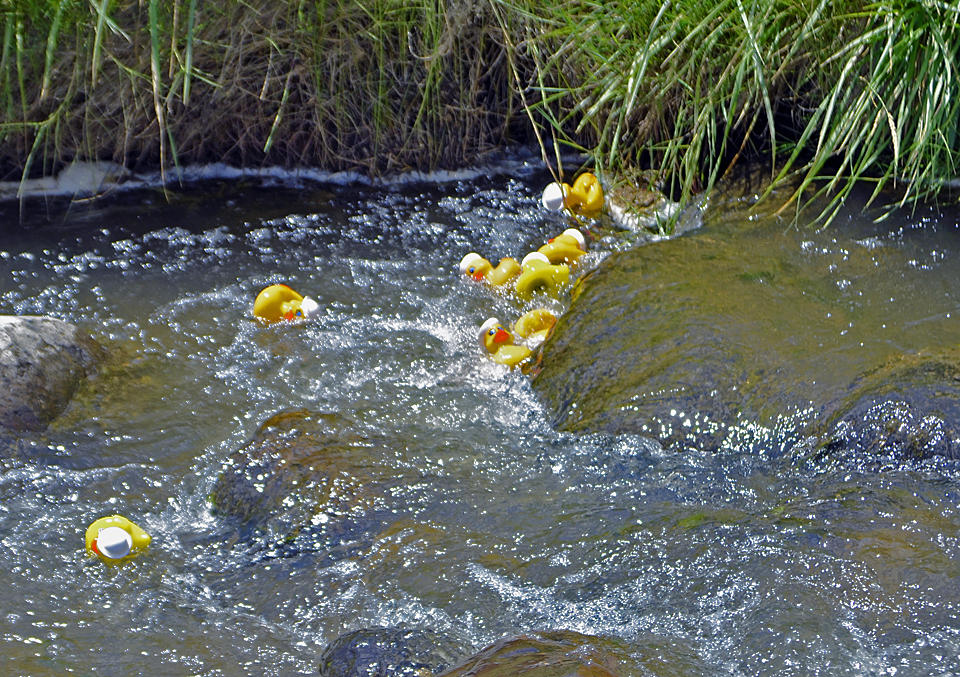 Large numbers of ducks, dispirited at falling behind the race leaders, got caught in little eddies behind rocks and by the banks. The firemen turned their hoses on them, in riot control fashion, and flushed them downstream. Photo by R.W./jemezdailypost.com 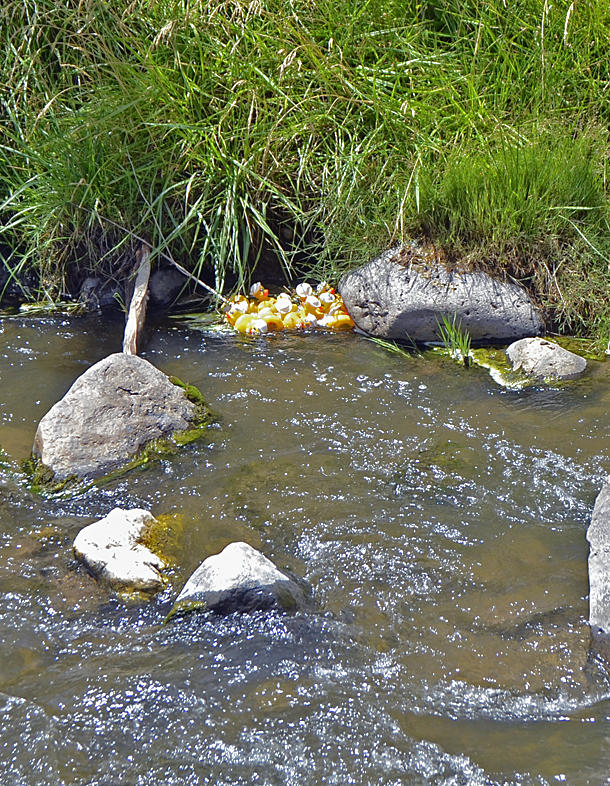 Just a bunch of losers, sheltering in the weeds behind a rock. Photo by R.W./jemezdailypost.com 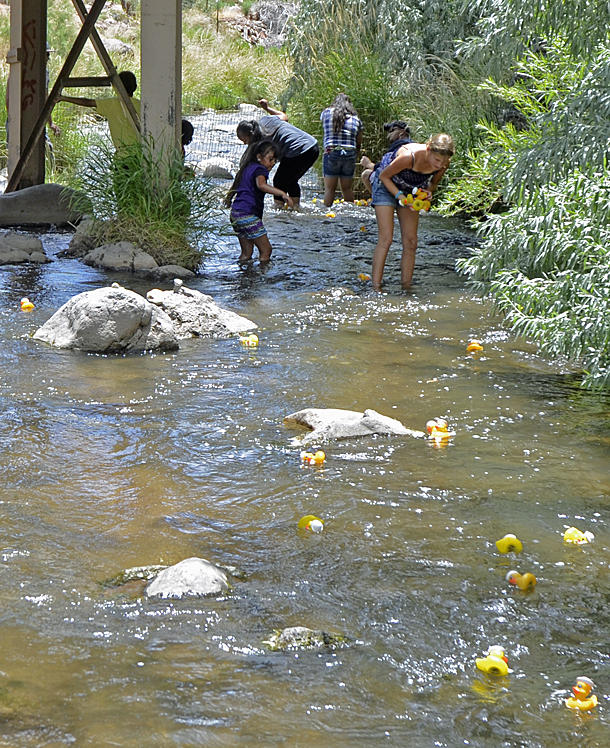 In gathering the stragglers, there might still be many lurking in the river, trapped among rocks and weeds. Suzanne Swetnam appeals to anyone finding strays to return them to the library, so they can participate in next year’s race. Photo by R.W./jemezdailypost.com