The Good, The Bad And The Sbagliato* 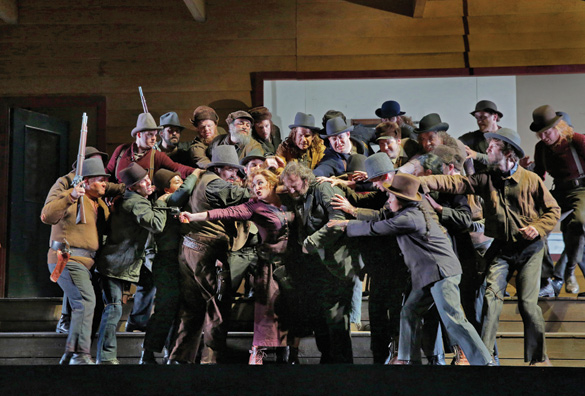 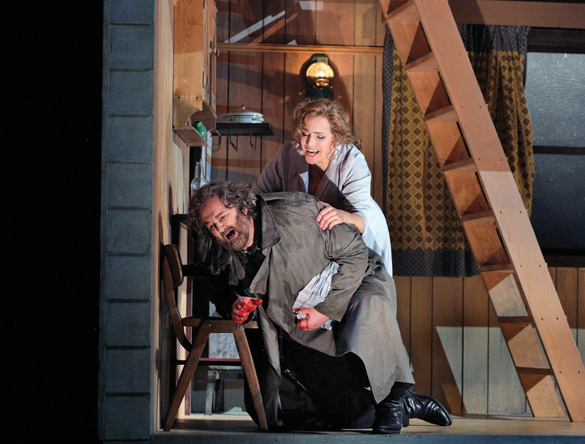 One of the great all-time Italian comic operas, Giacomo Puccini’s Fanciulla del West takes place in a small-mining camp during the early days of the California gold rush.

The star of the show, the “fanciulla,” or “the Girl,” as Puccini called her, is a tender-hearted, tough-minded saloon owner named Minnie, a thoroughly attractive heroine played by Patricia Racette one of the great international sopranos of our time.

A particular favorite in northern New Mexico where she maintain a residence in Santa Fe, Racette, has been a mainstay at the Santa Fe Opera, performing now in her ninth role.

Last year, she gave up her long-time gig as Cio-Cio in Madame Butterfly at the Metropolitan Opera, where she has sung many roles including seven appearances in operas composed by Puccini.

A ruggedly independent single gal, Minnie has never been kissed. She owns the local Polka saloon, where the all-male, boisterous miners hang out and stag dance in the adjacent dance hall, when they’re not drinking whiskey, playing cards or threatening to shoot somebody. Not only a superb songstress, Racette is also a natural actor. From her first step on stage opening night she carried the show.

The bad guy, a big, gentlemanly fellow with a bushy beard named Dick Johnson, comes into the saloon one night, and Minnie realizes she met him previously in passing. What she doesn’t know until a big shock in Act II, at her cabin later that night is that he is a disguised outlaw named Ramerrez who has arrived with schemes to steal the miner’s gold that Minnie holds in a back room of the saloon.

The cabin, a slick A-frame, that would make a great time-share in Aspen these days, is an anachronism, but everything changes as the emotional chemistry takes hold between the two principals, and Minnie’s theme of redeeming the transgressor begins to permeate the plot.

To his role as Ramerrez/Johnson, tenor Gwynn Hughes  Jones brings an extraordinary voice, last heard at the Santa Fe Opera in his role as Rudolfo in La Bohème in 2007.

He is less effective as an actor in this role, disassociated not only from the mob that wants to kill him but also from Minnie. Everybody wants a piece of her, but he just has to stand there to look adorable for Minnie. In part because of his size, he is comically challenged climbing stairs, hiding under Minnie’s bed and crawling around wounded.

One failed suitor, sheriff Jack Rance (played skillfully by baritone Mark Delavan, whose SFO debut was in 2001) knows all about him and is out to see him hang. The plot and the outlaw’s redemption depend on Rance’s gambling addiction,  a drop of blood and a game of cards.

This new production of Fanciulla returns to the Santa Fe Opera as a co-production with the English National Opera, directed in both venues by Richard Jones, a veteran theater and opera director.

The opera libretto, written by Carlo Zangorini with finishing touches by Guelfo Civinini, is based on an American play by David Belasco from his novel, The Girl of the Golden West. Puccini’s previous big hit, Madame Butterfly, was also inspired by the Belasco play of the same name.

In his book on the golden west, Belasco cited an early history of California that captured the inspiring spirit of the West: “In those strange days, people coming from God knows where joined forces in that far Western land, and according to the rude custom of the camp, their very names were soon lost and unrecorded, and here they struggled, laughed, gambled, cursed, killed, loved and worked out their strange destinies in a manner incredible to us of today.”

Fanciulla  opened at the Metropolitan Opera on December 10, 1910. No less than maestro Arturo Toscanini, conducted the orchestra, it was said, from memory. Emmy Destinn, a leading soprano of her age created the title role. She was paired with Enrico Caruso, a candidate for “greatest tenor who ever lived” as Dick Johnson, the wayward outlaw whose redemption provides the opera’s plot.

One of the curiosities about the music is that the major tenor role has no grand aria, so Caruso learned a role that didn’t lead to a solo concert number. The big moment then and now is when Johnson asks the miners not to tell Minnie what happened to him. Although it’s a very short piece, it brings Puccini’s lyrical writing to the fore.

The 1910 world premiere of Fanciulla helped the Met put major competitor Oscar Hammerstein’s Manhattan Opera House out of business. The opening night on Dec. 10 inspired dozens of curtain calls, according to reports. It was an enormous public relations triumph; and despite more than a few critical misgivings, the opera went on to huge success at 14 locations including Covent Gardens in England the next year. In the next century, Fanciulla won a permanent, if somewhat intermittent, place in the international repertory.

The Italian version of the Golden Girl has probably never quite resolved American discomfort from the Italian hybridization of one of its own cultural jewels. Lamenting the lack of genuine local color in the score – where are the banjos, for example, Camptown Races? – one critic complained that the composer had written an “absolutely Italian score” for an “absolutely American subject.“

Although Puccini lacked a real connection to the 49ers, which may suggest that some portions of the score remain unconvincing, the composer was more intent on breaking away from the romanticism of doubling the vocal parts in the orchestra.

By doing that, he was able to present Belasco’s story in the way that gave the orchestra a more prominent and more interesting score. Andrew Lloyd Webber’s operas  use the orchestra in much the same way as Puccini’s early operas, and it is fascinating that Sir Lloyd Webber borrowed Puccini’s Fanciulla Waltz tune for his “Music of the Night” theme in Phantom of the Opera.

The co-production arrangement with the English National Opera may also be partly responsible for a couple of other anomalies.

The Polka Saloon crammed with miners, may make a point about the available interior space in a gold rush situation, or it may be rationalized as an  ironic, post-modern wink of time. One can only wonder. But the pre-fab stylization with its corrugated ceiling and anachronistic, off-gold neon lights seem to be very much off the subject. In the original production, by contrast, the boots of the story’s mud-covered minors were given an additional layer of mud by the author/producer David Belasco.

On another matter, we get it that it may be okay at times to go along with cultural stereotypes that are a product of a certain time and place, but the treatment of the Native American couple in this performance seemed particularly insensitive.

Billy Jackrabbit, originally identified in the libretto as an “Indian redskin,” and “Billy’s squaw,” named Wonkle, are played respectively by James Harrington and Kristen Choi, apprentices who have several other SFO roles this summer. No fault of their own, they are saddled with limp, wooden-Indian roles. That may not be an issue in the London Coliseum, but might have been of more interest to an opera house surrounded by Pueblo reservations.

Finally, we would like to emphasize that the greatest pleasure from this opera will be found in listening to the brilliant vocal performances of Racette, and Hughes Jones and the scintillating  orchestral rendering of maestro Emmanuel Villaume. With all that and the splendid acting of Raeette, the Santa Fe Opera seems well on its way to both a golden season and a diamond year.

The sets go back to London at the end of the season.

The choreography of the crowded bunch of minors is extraordinarily adept. They congregate, disperse, gather around again and fly out the door with amazing precision.

Before the special light fixtures were installed on the front of the mezzanine last year, it would have been ‘impossible’ to light Fanciulla.

Missy West (Costume shop director) said that American singers tend to be larger than Europeans, so often times the costumes will have to be remade when there are co-productions. They built all of the costumes for Racette, Jones and Delavan. The costumes cost more than the sets.

There are 394 props for Fanciulla – more than for Giovanni and Capriccio and about the same as Vanessa.

The conductor Emmanuel Villaume is French born and in his fourth season as Music Director of the Dallas Opera. Oliver Prezant, music director of the Santa Fe Community Orchestra and ace lecturer for the Santa Fe Opera’s prelude talks thinks Villaume’s conducting of Fanciulla is the best he’s done for the SFO.

When the Los Alamos and Española Opera Guilds hosted the Apprentice Concert in the United Church recently, Adrian Smith and Rebecca Krynski were the performers. Adrian is Larkens in Fanciulla – on stage before other miners and downstage while sitting and moping, wishing he was back home.