The Game Is Afoot For Local Board Game Enthusiasts 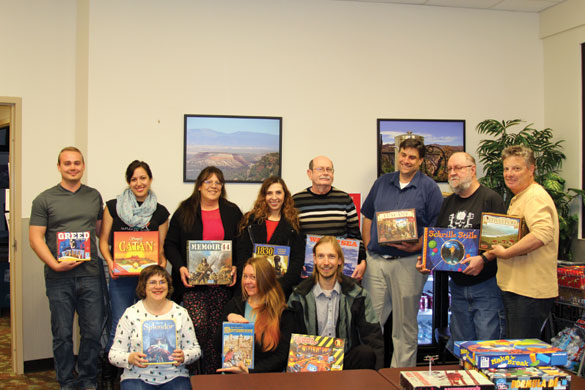 Board gamers show off some of the games available for play at a recent Friday gathering  of the group at the Upstairs Meeting Room at Smith’s Marketplace. Photo by Bonnie J. Gordon/ladailypost.com

Board games have grown up a lot since the days of Monopoly. From the 1960s to the early 1980s, the board game industry was dominated simple, family-orientated games such as Life (1960) and Risk (1959) produced mainly by Milton Bradley and Parker Brothers.

Avalon Hill and other companies produced historically orientated complex strategy games for a small market, but they could be hard to find. The rise of game consoles and computer gaming impacted the market as well.

Then in the mid-1990s, the board game industry was revived in Europe, notably Germany. Eurogame designers became mini-stars in Europe. English-language versions of these games came to the U. S. via a few importers, notable among them,  Albuquerque’s Rio Grande Games.

Rob Derrick started the first local group for Los Alamos board gamers in the early 2000s. Currently, a good sized group of local gamers gather to play at 6 p.m. Wednesdays at Mesa Public Library and at 7 p.m. Fridays and 6 p.m. Saturdays in the Upstairs Meeting Room at Smith’s Marketplace (ask a Smith’s employee to guide you).  Between them, the group has more than 4,500 games to share. The games vary widely, in subject matter, style of play and difficulty of play. The group spoke with the Daily Post at a recent Friday gathering.

The group agreed that one of their favorite things about board gaming is the social interaction. Instead of sitting alone in front of a computer, they’re hanging out with friends.

“I do a lot of the beginner games,” Tim Benjamin said. “They are simple enough that anyone can get started with them—really!”

“It’s great, because you don’t have to know anything to get started,” one novice said. “The games involve learning on different levels. I’ve learned a lot of history. It’s really stimulating!”
The games vary so much it’s hard to describe what they’re like.

“What we want is for people to come and learn all kinds of games,” Benjamin said. He WILL find a game you love, he promises.

Here’s an example of an adult board game, just to give you the idea. Don’t get the idea that all the games the group plays are like this one. They also play interactive social games, building games, all kinds of games. This is just an example.

The Settlers of Catan was one of the first Eurogames to achieve popularity outside of Europe. More than 24 million games in the Catan series have been sold and the game has been translated in over 30 languages.

In Catan, players compete to establish the most successful colony on a fictional island. The game board, representing the island, is composed of hexagonal tiles of different land types. On each player’s turn, they roll dice to see if the land they occupy produces resources, which they use to build roads, cities, and settlements. By building settlements and gaining cards, players earn points leading to victory.

Catan entices players to go outside the confines of strict rules — allowing them to come to their own agreements when trading resources and money with one another.

The gamers are a very international group, with plays from Germany, the Czech Republic, Argentina and Turkey in attendance the night I visited.

“I was a bit surprised to discover that so many of the games come from Germany,” a German gamer noted. “I expected mostly American games.” Board games are very popular in Germany, among groups of friends as well as among families, she said.

Fortsen leads the Saturday gathering, and she stressed that families and kids are very welcome to come.

Since most games involve 4-6 players, several (at least!) games are in progress at once, so it’s easy to find one you want to join. Games can take from a half hour to many hours to play.

Here’s the chance you may be looking for, to meet interesting people, exercise your mind, learn interesting facts and guess what? You get to play games! The group will welcome you and teach you if you need it. “Just come!” they said.