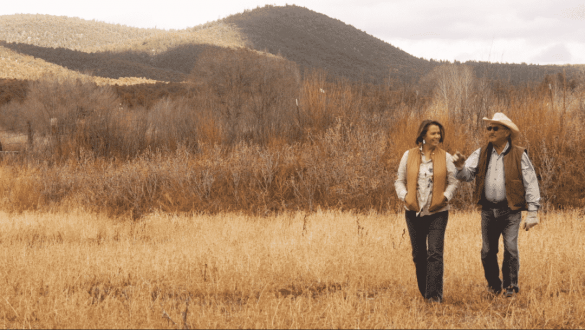 Land Commissioner is one of those statewide offices that is just far enough down the ballot that most people don’t pay attention to it.

It is however one of the most important and powerful offices in the state of New Mexico.

Rep. Stephanie Garcia Richard of Los Alamos is a candidate for this office, in which a single officeholder holds sway over 9 million acres of surface property, and 13 million acres of subsurface rights. To put that into context, New Mexico’s state trust lands are larger than the entirety of New Jersey and Connecticut combined.

The U.S. Congress originally created the Office of the Land Commissioner in the 1880s, long before New Mexico became a state. The office was created to oversee what was then called the “Common Schools Fund”, and according to the New Mexico Land Office website, was formed with the explicit purpose to manage state lands as a public trust to support public education of New Mexico’s children in perpetuity. This role has grown over the decades to include funding all public schools and colleges in New Mexico, certain hospitals and other beneficiaries.

The individual who is elected Commissioner of Public Lands has authority to lease, sell or trade the land away, so long as they say they are doing so within the limited guidelines set in the constitution and statute. There is no oversight entity or board to review decisions made by the land commissioner. There is no regulatory process like that found at the federal level, such as the NEPA process. And there is no avenue to question or protest land commissioner decisions, short of suing the land office after the fact.

This level of power and autonomy draws considerable attention from industries that utilize state trust lands, such as the oil and natural gas extractive industry. These industries pour large amounts of cash into the campaigns of candidates viewed as favorable to these industries, and this year is no different.

The incumbent Aubrey Dunn is not running for reelection, and there are five people campaigning to succeed him. Libertarian Party candidate Michael Lucero will be on the November ballot, as will Patrick Lyons, a former land commissioner who is running as the sole Republican. In Lyons’ previous stint as Land Commissioner, he got caught up in a couple of scandals for accepting large contributions from land developers, with the questionable leases and sales being reversed by the Supreme Court, or by his successor, Ray Powell.

The Democratic nominee will be selected in the June 5 Primary Election from the three Democrats vying for the seat. This Democratic Party primary is where much of the action is occurring in this race.

Garcia Richard is at the top of the ballot and represents Los Alamos and the Jemez mountain range. She entered the race late, after former Land Commissioner Ray Powell dropped out and publicly recruited her to take his place.

If elected, Garcia Richard will be the first woman Land Commissioner in the history of New Mexico and brings years of experience serving on the budget committee that oversees and crafts the land office budget, as well as her background on land use, environmental and extractive industry issues.  She also is a former teacher and chair of the House Education Committee, giving her direct insight into the end user of the Land Office beneficiaries.

Along with former Land Commissioner Powell’s support, Garcia Richard has been endorsed by unions, anti-fracking organizations, and progressive groups such as Our Revolution New Mexico and EQNM. Garcia Richard is a native New Mexican, born in Tucumcari, raised in Silver City, and living in White Rock. She graduated from Barnard College at Columbia University with a degree in government & political science, and later from California State Los Angeles with an education certification.

Second on the ballot is Garrett VeneKlasen, a Santa Fe resident who has never held an elected office but has run a hunting outfitting business for years before going to work for the hunter advocacy group, the New Mexico Wildlife Federation. VeneKlasen has never run as a Democrat before, because until three years ago he was a registered Republican. A political website created to oppose his campaign points out that six months before VeneKlasen changed to the Democratic Party he was quoted in the media calling himself a “proud lifelong Republican and fiscal conservative”.

Despite his Republican past, VeneKlasen is experiencing success in fundraising, receiving several “max-out” contributions of $5,500 from several wealthy New Mexicans and out of state organizations. He also has been endorsed by two environmental groups that his organization works with, and by Sen. Martin Heinrich who is known to be an avid hunter. Some of his endorsers have begun funding attack mailers and ads against his opponents. VeneKlasen was born in Santa Fe and graduated from UNM with a degree in Latin American studies.

The third Democrat on the June ballot is State Sen. George Munoz from Gallup. Munoz runs a business in property development and serves on the Senate Finance committee giving him a background on state finances, including the land office. He was born in Gallup but lived several years in Arizona where he attended college but did not graduate. Prior to moving back to New Mexico, Munoz was a registered Republican, but he became a Democrat when he returned to Gallup. Munoz is largely self-funding his campaign, giving himself loans totaling $200,000, but he also has received several large contributions from petroleum companies, including Occidental Oil & Gas, Marathon Oil and Concho Resources. Munoz has received endorsements from some of his Senate colleagues including State Sen. Howie Morales who is running for Lt. Governor.

The winner of this June’s Democratic primary will face off against Republican Pat Lyons and Libertarian Michael Lucero. The winner of the November election will then control one of the most powerful offices in New Mexico. This office may be largely unknown, but it has a huge impact on the revenue for local schools and hospitals, as well as deciding what practices are allowed on state trust lands.